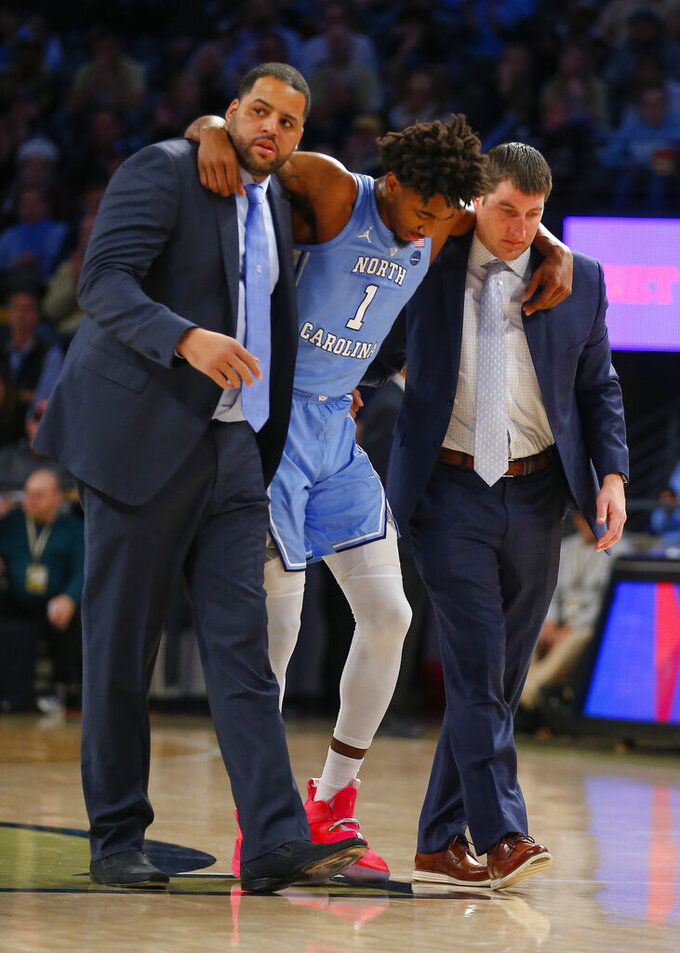 North Carolina guard Leaky Black (1) is helped off the court after being injured during the second half of an NCAA college basketball game against Georgia Tech in Atlanta, Tuesday, Jan. 29, 2019. (AP Photo/Todd Kirkland) 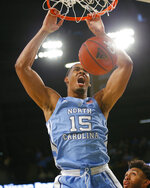 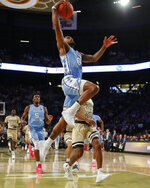 ATLANTA (AP) — Cameron Johnson and Coby White showed North Carolina is tough to beat and that the Tar Heels might be able to dream big.

Johnson scored a game-high 22 points, including eight straight to open the second half, as No. 9 North Carolina defeated Georgia Tech 77-54 Tuesday night.

"Coach Williams told me after the game, he says, 'That was our best 10-minute stretch all year. If we play like that, we'll win the national championship,'" Pastner said after his team was outscored by 33 points from beyond the 3-point arc.

Tech shot 2 for 16 from long distance.

"I think people are sleeping on them. I know they're ninth in the country, but nobody's really talking about them," Pastner said. "But they're really good and they're playing at a very high level."

Georgia Tech (11-10, 3-5) managed to muddy the game in the first half, at least in the paint with the big man tandem of Abdoulaye Gueye and center James Banks III anchoring their zone.

Carolina built a 31-24 halftime lead despite shooting 7 of 17, but the Tar Heels hit 5 of 12 from long distance and the Jackets connected on just 1 of 10.

"Eight turnovers in the first half: I was very disappointed in that ...," Williams said. "To miss 32 shots (in the game) and get seven offensive rebounds, I was not pleased."

Gueye led the Jackets with 14 points, but Tech was never in the game after North Carolina made seven of its first eight shots in the second half, including a pair of 3-pointers by Johnson and two more by White. He finished with 19 points on 5-of-9 3-point shooting. The freshman added a career-high eight assists.

Johnson, a graduate transfer from Pitt, hit 3-pointers on consecutive possessions to start the second half, and then dunked off a steal.

Eventually, the Tar Heels pulled Georgia Tech out of its preferred zone, but it was too late. North Carolina built a lead of 30 points when freshman Nassir Little dunked off a steal to push the margin to 65-35 with 10:18 left.

Georgia Tech fell behind 31-21 when Johnson made a pair of free throws with 1:10 left in the first half.

Tech made just 10 of 32 shots, and missed its first nine 3-point shots before Michael Devoe connected from beyond the arc with 56 seconds remaining.

INJURIES ON BOTH SIDES

North Carolina freshman reserve guard Leaky Black was helped from the court with an injury to his left ankle or leg with 8:28 remaining in the game. ... Tech starting point guard Jose Alvarado was helped to the locker room with 5:33 left with what appeared to be a right ankle or foot injury.

Georgia Tech: The Yellow Jackets lost track of North Carolina shooters and allowed their most 3-pointers in a game this season. Previously, Arkansas made 10 of 32 against Tech, and Wake Forest made 9 of 22, but the Jackets won both games with stellar shooting of their own. On Tuesday, they were not only 2 of 16 on 3-pointers, but 18 of 38 in the paint. "We had that stretch to start the game where we could have been up 10-0," Pastner said. "We just missed open shots and layups, and that's just a big deal."

North Carolina: Saturday at No. 15 Louisville.

Georgia Tech: At No. 25 Florida State on Saturday.