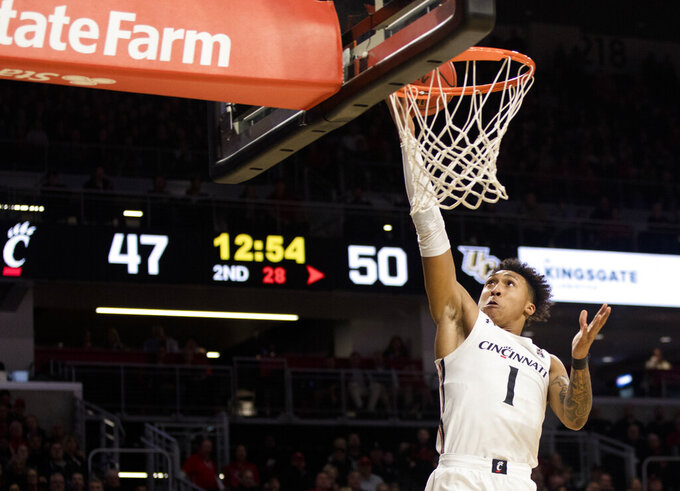 Cincinnati guard Jeremiah Davenport (1) lays the ball during the second half of the team's NCAA college basketball game against Central Florida on Wednesday, Feb. 19, 2020, in Cincinnati. (Albert Cesare/The Cincinnati Enquirer via AP)

CINCINNATI (AP) — Central Florida turned to Tony Johnson Jr. in the second half. The freshman didn't let the Knights down.

Johnson scored four of his career-high 21 points in the second overtime and Central Florida upset first-place Cincinnati 89-87 in an American Athletic Conference game on Wednesday night.

Johnson, who didn't start the game before coach Johnny Dawkins sent him out to start the second half, shook off the roars from the Cincinnati crowd of 10,874 to convert two free throws before scoring on a layup with a 1:03 left to give Central Florida (14-11, 5-8) an 86-85 lead. Matt Milon added two free throws with 11.7 seconds left to give UCF a 3-point cushion.

“I was comfortable,” Johnson Jr. said. “We've played in front of big crowds before. Coach always tells me to be ready. It was my time."

Jarron Cumberland's half court 3-pointer was ruled to have come after the buzzer after a brief video review, clinching the Knights' third win in their last four games.

Trevon Scott gave Cincinnati (17-9, 10-4) a 70-68 lead on an off-balance layup with 31.3 seconds left in regulation, but Mahan answered with a game-tying layup of his own with 13 seconds left, sending Cincinnati to its fourth consecutive overtime game, tying an NCAA record.

Taking advantage of a leaky Cincinnati defense, Johnson Jr. scored 18 of his 21 points in the second half. Collin Smith scored 17 points in the game before fouling out in the first minute of overtime. Milon and Darin Green Jr. each added 12.

Scott logged his 11th double-double of the season, ninth in conference play, for Cincinnati. He set a single-game career high with 21 rebounds while scoring a team-high 22 points. Keith Williams chipped in 17 points and Jaevon Cumberland added 12 for the Bearcats, who went into the game tied with No. 22 Houston for first place.

“We got beat,” Bearcats coach John Brannen said. “I was really disappointed with our effort in the first half and our rebounding. We haven't guarded in a month. I don't know if we've fallen in love with offense, but we've got to get tougher guarding. It felt like we were not connected defensively.”

“I don’t think it was anything they were doing defensively,” Dawkins said. "We were fortunate that we had guys step up and make plays. We wanted to come out in the atmosphere and play a tough 40 minutes – well 50 minutes. That was a really good effort.”

Scott almost pulled off a first-half double-double, finishing with 14 points and nine rebounds, helping Cincinnati lead by as many as 10 points before Central Florida finished the half with a 5-0 run capped by Mahan’s putback with six seconds left before halftime. Mahan scored 10 points in the first half.

Central Florida: The Knights went into the game 2-12 all-time against the Bearcats, including 0-5 in Cincinnati.

Cincinnati: The overtime was a school- and AAC-record seventh of the season for the Bearcats, who had never played in four straight overtime games.

The Bearcats are 4-3 in their overtime games and 3-3 in their six games decided by one possession — two or three points.

Scott is averaging 10.4 rebounds per game as he tries to become the first Bearcat to average in double figures in rebounds for an entire season since Dwight “Jelly” Jones averaged 10.1 during the 1982-1983 season.

Brannen, in his first season with the Bearcats, missed on his first shot at posting his 100th career win. He won 81 games in four seasons as coach at Northern Kentucky before coming to Cincinnati.

Central Florida: The Knights play their only home game in a stretch of four on Saturday against Tulane. Central Florida beat the Green Wave 74-55 on January 14 in New Orleans.

Cincinnati: The Bearcats stay home to play Wichita State on Sunday. Cincinnati knocked off the Shockers 80-79 on February 6 in Kansas.