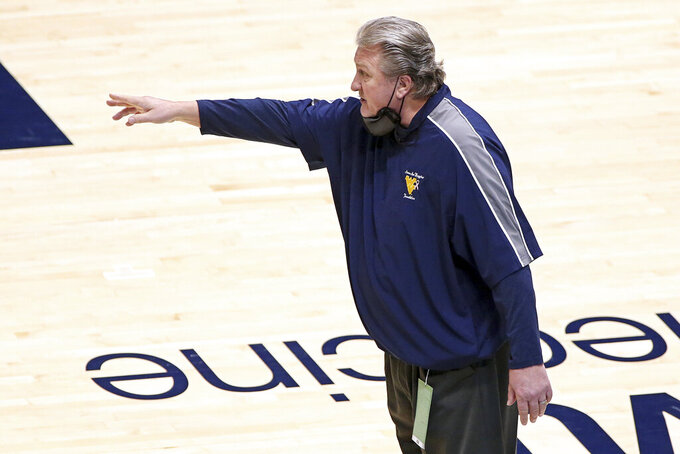 MORGANTOWN, W.Va. (AP) — Three years to the day since Texas coach Shaka Smart told his players that Andrew Jones had been diagnosed with leukemia, the junior guard put his latest stamp on what is turning into a special season for the Longhorns.

Jones hit a 3-pointer with 1.8 seconds left to lift the fourth-ranked Longhorns to a 72-70 victory over No. 14 West Virginia on Saturday.

Courtney Ramey drove into the lane among four defenders before tossing the ball to Jones in the right corner for an uncontested shot after West Virginia's Emmitt Matthews missed two free throws with 11 seconds left.

On Jan. 9, 2018, Smart told his players that Jones had been diagnosed with leukemia. Jones missed most of the next two seasons and completed his cancer treatments in September 2019.

On Saturday, Jones went over the 1,000-point mark for his career, joined Smart and his teammates in a postgame locker room dance, then got on Twitter to thank God “for even allowing me to be here and play the game that I love.”

He also thanked his teammates and supporters. "Let’s keep it going," Jones wrote.

“I think the rest of us were just like: ‘We’ll be happy if we can just get you back healthy. Forget playing right now.’ But I think that really helped him from a motivational standpoint."

Texas scored the final seven points of the game and avenged last year's 38-point loss at West Virginia, which was the fifth-worst loss in program history and the worst under Smart.

Taz Sherman scored 17 points, Sean McNeil added 14 points and Derek Culver had his seventh double-double of the season, with 14 points and 16 rebounds, for the Mountaineers (9-4, 2-3).

West Virginia was poised to add to a 54-45 lead midway through the second half, then Texas got tough on defense.

“We’re not as athletic as what they were,” West Virginia coach Bob Huggins said. “They make up for a lot of mistakes with their athleticism.”

Coleman blocked Sherman's layup attempt at the rim. Culver, trying to fight through a pair of defenders, missed another layup on the Mountaineers' next possession. Kai Jones then blocked another Culver layup attempt and Jones scored at the other end of the court as part of an 8-0 run that tied the score at 57 with 8:36 left.

“I thought there was a lot of contact in the post,” Huggins said. “Those are shots Derek normally makes.”

The Longhorns, who trailed most of the game, didn't retake the lead until the final seconds.

Texas: The Longhorns' guards seemed to be a step quicker to the basket. When the Mountaineers tightened their defense, Texas hit the long jumper. Texas went 12 of 23 (52%) from the floor after halftime.

West Virginia: The Mountaineers became the first team to score 40 points in the first half against Texas this season. It was a reversal of fortunes for West Virginia after terrible starts in their two previous games. But it was the second half Saturday where West Virginia struggled this time, making just 10 of 34 field goals (29%).

The Longhorns should maintain their ranking after a 2-0 week. West Virginia will likely fall further away from the top 10.

Huggins had high praise for the Longhorns' stable lineup. The guard trio of Coleman, Jones and Ramey along with forward Jericho Sims have combined to play in 381 career games.

“That’s an experienced team,” Huggins said. "In this day and age with guys picking up and leaving, guys transferring, it’s a great thing when you can keep your team together like that.”

West Virginia plays at No. 2 Baylor on Tuesday.