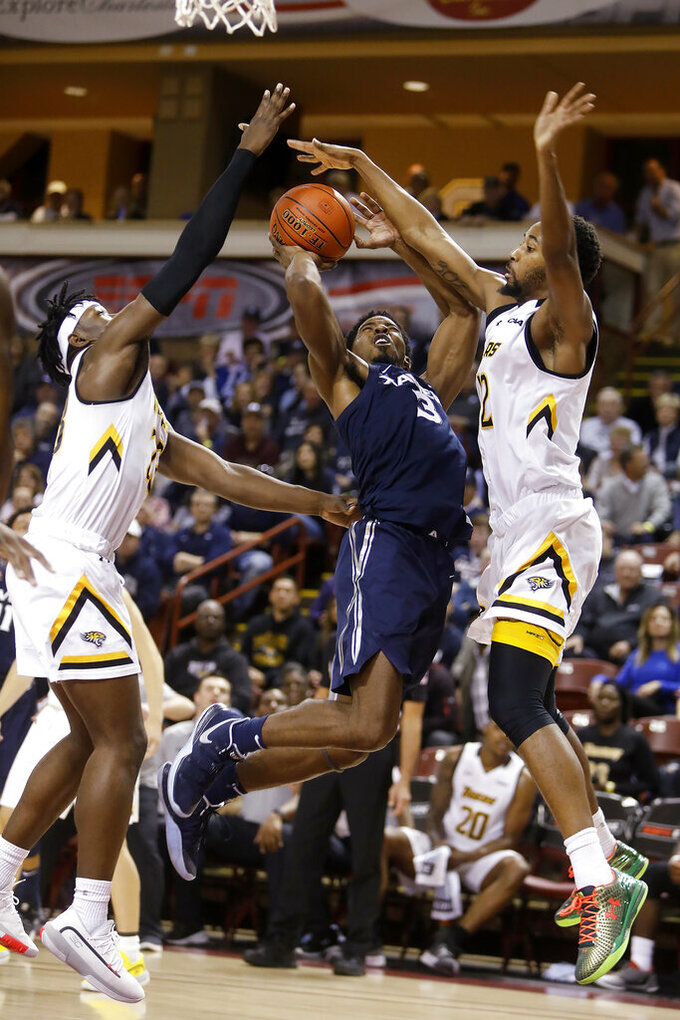 Xavier's Quentin Goodwin goes up for a shot between Towson's Brian Fobbs, left, and Juwan Gray during the first half of an NCAA college basketball game during the Charleston Classic on Thursday, Nov. 21, 2019, in Charleston, S.C. (AP Photo/Mic Smith) 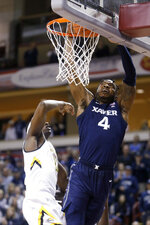 CHARLESTON, S.C. (AP) — No. 18 Xavier came down to the Charleston Classic with something to prove. The Musketeers took the first step toward that goal Thursday night.

Tyrique Jones had 12 and 12 rebounds as Xavier put away Towson 73-51 to start the eight-team tournament. The Musketeers have heard the questions some have about their undefeated start, about the close calls at home and lack of significant challenges early in their schedule.

“Most definitely” Xavier has a mission this weekend said junior Paul Scruggs, among four Musketeers in double figures.

“That’s what we talk about, how no matter where we are, we want to be the same,” he said.

And right now, that’s another perfect start. Xavier improved to 5-0 for the second time in three seasons and the first time since the 2017-18 club went 29-6, won the Big East regular-season crown and earned a No. 1 seed in the NCAA Tournament.

“We still haven’t played our best basketball,” guard Bryce Moore said. “We just want to stick to our standards and do what we know we can do.”

This Xavier group just might have the pieces for another special season as long as Jones keeps playing like this. The dynamic 6-foot-9 senior had a rim-rattling jam early in the second half and finished with the second double-double of the season and 12th of his college career.

The Musketeers will face UConn in the eight-team tournament Friday night for a spot in the championship game. UConn beat Buffalo 79-68 later Thursday night.

Xavier opened a double-digit lead with a 15-6 run midway through the opening half. Scruggs had a pair of baskets to start things, Dahmir Bishop hit a three, Scruggs added another bucket and Carter finished things with two fouls and an inside basket to put the Musketeers up 15-6.

The Tigers (2-3) struggled against Xavier’s relentless pressure, turning the ball over on three straight positions. They weren’t much more successful when they held onto the ball, going 1 of 14 from the field during one brutal stretch of the period.

Towson got a bit of a lift heading to the locker room as Jakigh Dottin made about a 35-footer as time ran out to draw his team to 31-20 at the break. Still, the Tigers could not get their shots to fall, finishing just 18 of 59 from the field.

Towson came in off a competitive loss to Florida, 66-60, and coach Pat Skerry hoped his team could hang in with Xavier, too. “They’re not as tall as Florida but they’re built like bowling balls,” Skerry said.

Jason Carter finished with 13 points and Bryce Moore added 12 points for Xavier, including a four-point play with 9:50 to go.

Towson: The Tigers won’t be back home for a game until Dec. 10. They’ll be very used to each other after this seven-game stretch that started at with a loss at Florida a week ago and ends at Vermont on Dec. 7.

Xavier: The Musketeers first four wins all came at home and, while they were not all easy, there was a comfort to not leaving the gym. This week in Charleston is a big test for Xavier, which could wind up playing Florida or Miami in its tournament game Sunday night — either for third place or for its third in-season title in the past five seasons.

Paul Scruggs knew when teammate Tyrique Jones was scowling, gesturing and showing emotion, it would be a long game for Towson. Scruggs says his senior teammate is demonstrative that’s a strong sign he’s ready to play. “We know he’s locked in,” Scuggs said.

Along with his double-figure points and rebounds, Jones had three assists and a block.

Pat Skerry said he told his team he came to Charleston because he believed his team was up to the challenge of facing solid programs like Xavier and UConn. But he said his club made too many mental errors against the Musketeers to stay in it. “Now, it’s their job to make sure I knew what I was doing” by coming here, he said with a smile.