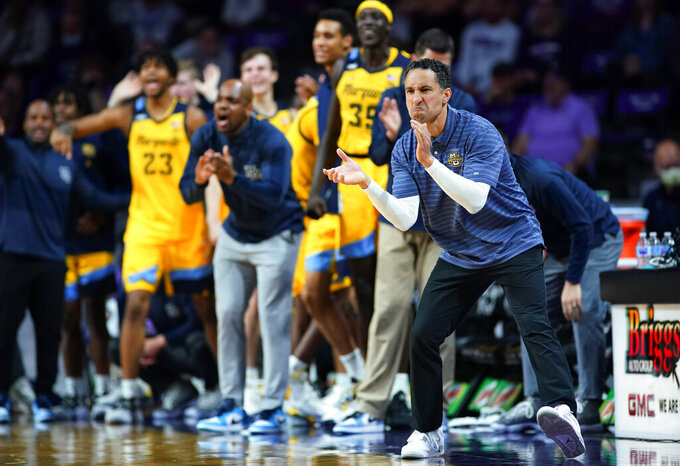 Kansas State pulled within a point, 64-63 on a Mike McGuirl 3-pointer with 19 seconds left and, after fouling three times in as many seconds after a timeout, the Wildcats got the ball back when Jones missed a free throw and Kaosi Ezeagu grabbed the defensive board.

But after working for a final shot, Ismael Massoud's drive for the winning reverse layup was cleanly rejected by the 6-foot-9 freshman Ighodaro with Tyler Kolek wrapping up the rebound and the Marquette victory.

Justin Lewis scored 14 for Marquette (8-2), which is now 4-1 this season against Power Five opponents.

Mark Smith scored four of K-State's last seven points, finishing with a season-high 17, as the Wildcats (5-3) cut a seven point gap down to one. Massoud added 16 points and Markquis Nowell 11 with 11 assists and eight rebounds.

The Wildcats were playing without Nijel Pack, who missed a second game after suffering a concussion in practice. The sophomore point guard leads K-State in scoring at 15.8 points per game.

The Wildcats opened the second half with two Massoud baskets around a McGuirl steal, and when Nowell followed with another bucket, Marquette called time out less than 90 seconds into the half.

Marquette answered with two brief runs, including an 8-0 surge over about two minutes in which K-State missed three straight 3-pointers.

The Golden Eagles hit 11 of 37 from distance despite K-State being ranked fourth nationally in 3-point defense.

There were nine lead changes and eight ties with Marquette taking the lead for good, 52-50, on an Olivier-Maxence Prosper dunk at the 10:03 mark.

Including his time at Texas (2015-21), Marquette first-year coach Shaka Smart is 8-5 against Kansas State, 5-2 in Bramlage Coliseum.