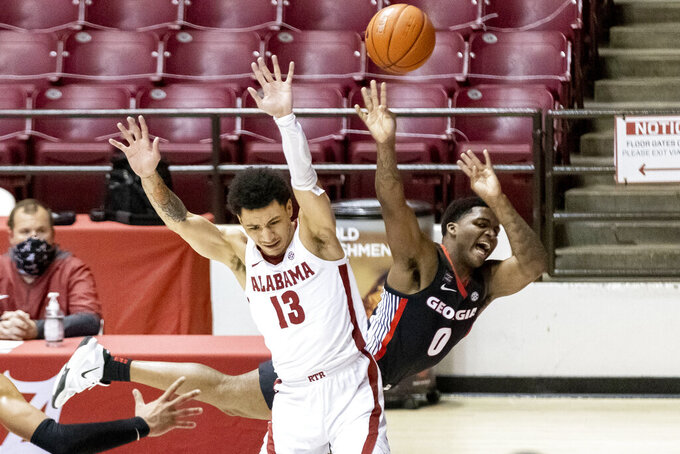 Georgia guard K.D. Johnson (0) draws a foul from Alabama guard Jahvon Quinerly (13) during the first half of an NCAA college basketball game on Saturday, Feb. 13, 2021, in Tuscaloosa, Ala. (AP Photo/Vasha Hunt) 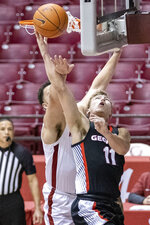 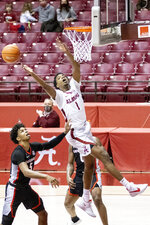 TUSCALOOSA, Ala. (AP) — Alex Reese opened Alabama's scoring with a 3-pointer and Herb Jones followed quickly with another.

It was only the beginning of a torrid shooting performance for the 11th-ranked Crimson Tide.

Jones scored 17 of his career-high 21 points in the first half Saturday and No. 11 Alabama routed Georgia 115-82 in the program's most prolific scoring effort in a Southeastern Conference game.

“It’s pretty crazy,” Oats said. “Nobody shot more than nine times and we scored 115. It helps when you make 3s and you’ve got a lot of guys that can make 3s.”

Freshman Josh Primo scored 19 points, all after the half, for the Tide (17-5, 12-1 SEC), which had five players score in double figures and made 18 of 30 3-pointers divvied among eight players.

Alabama came into the day with a 3-1/2-game lead in the league standings with four games now remaining in the regular season.

“When you overhelp (defensively) against good 3-point shooting teams that are really good at passing the ball, you're in for a problem,” Georgia coach Tom Crean said. "And they were hitting them.

“Our shot challenges were not nearly what we needed them to be.”

The Bulldogs (12-8, 5-8) have dropped the first two of a three-game string of games against the SEC's ranked teams. But freshman K.D. Johnson, at least, had a big week. He scored a career-high 22 points against No. 16 Tennessee and topped that with 24 on Saturday.

Jones was only two points shy of his previous career best by halftime, propelling the Tide to a 51-38 lead. He went into the locker room making 6 of 8 shots and hitting three 3-pointers. Jones came out with a quick drive for a basket for his only second-half attempt.

Jones was limited in practice this week with nagging lower back pain, but it didn't slow him down in the first half.

"He makes our offense a whole lot better when Herb’s playing explosive like he was," Oats said.

Jaden Shackelford scored 18 points for the Tide, who also got 16 from Jahvon Quinerly and 13 from John Petty Jr. Freshman reserve Darius Miles got into the act with a late dunk that roused both the bench and the fans.

“The past few games have been slow for us on the offensive end,” Shackelford said. “It was good for us and it felt good to get back to how we’re used to playing.”

Sahvir Wheeler scored 16 points for the Bulldogs, while Toumani Camara had 12 and Tye Fagan 11.

Georgia did manage a seven-point spurt after falling behind by 18 early in the second half, but the deficit ballooned from there.

Georgia: The Bulldogs were cold from 3-point range, making 2 of 19 attempts. Camara and Wheeler combined for Georgia’s first 14 points, making 6 of 7 shots between them. Teammates missed their first eight shots.

Alabama could make a return to the Top 10 with the victory and would appear to have a relatively weak finishing regular-season schedule.

Georgia has another tough game, hosting No. 10 Missouri on Tuesday night.

Alabama is scheduled to visit Texas A&M on Wednesday night. The Aggies' last three games have been postponed because of COVID-19 issues.