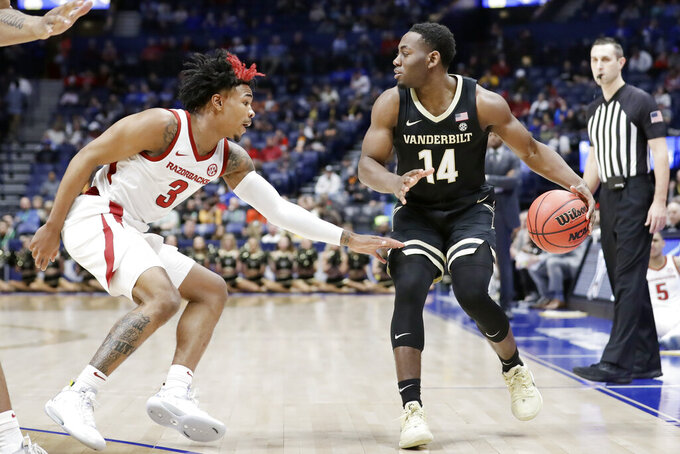 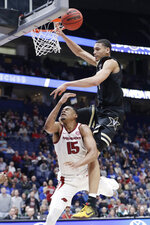 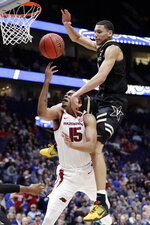 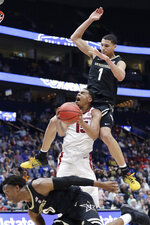 NASHVILLE, Tenn. (AP) — Arkansas coach Eric Musselman is really glad his Razorbacks got one of the last chances to play a game in front of fans.

Mason Jones scored 22 points before fouling out, and the 11th-seeded Arkansas Razorbacks beat No. 14 seed Vanderbilt 86-73 Wednesday night in the last Southeastern Conference Tournament game open to the general public.

“They got an opportunity to experience that in a great environment I mean for a first game on the first night of the tournament,” Musselman said. “It was a great turnout, and obviously it's the severity and seriousness of this is well beyond anything a coach or player, whatever."

The SEC announced a few minutes before tip-off that the league was joining other Power Five conferences in closing the rest of this event to all but players, essential staff and credentialed media. The decision wasn't made inside Bridgestone Arena until halftime with fans booing as soon as the P.A. announcer began talking.

Arkansas (20-12) won its sixth straight over Vanderbilt and now will play No. 6 seed South Carolina on Thursday night in the second round. The Razorbacks have reached the semifinals in three of the last five league tournaments and improved to 27-27 all-time at this event.

“We're just going to go out there and go play just like we're in the park or something,” Jones said. “We're just going to play hard, and it'll still show a W or an L at the end of the day, and we want to come out with a W. So we're going to bring the same energy we brought today.”

Jones, the SEC's leading scorer and The Associated Press' co-SEC player of the year, was 10 of 11 at the free throw line before fouling out with 1:45 left. Desi Sills added 20, Isaiah Joe had 18 before fouling out late and Jimmy Whitt had 12.

“Not the ending that we were looking for,” Vanderbilt first-year coach Jerry Stackhouse said.

Saben Lee led Vanderbilt with a game-high 30 points before fouling out in the final minute. Scotty Pippen Jr. added 16, Dylan Disu had 13 points and 10 rebounds, and Jordan Wright added 10.

Pippen opened the game with a 3-pointer for Vandy. Then Jones scored the next seven points to put Arkansas ahead to stay. Both teams struggled to shoot with the shot clock off for a bit, forcing the public address announcer to count off the final 10 seconds.

Vanderbilt missed 19 of 20 shots and went 9:23 without a field goal. Arkansas had its stretches missing shots, but the Razorbacks still jumped out to a double-digit lead. They were up 25-9 with 6:04 left on a 3-pointer by Joe and led 38-26 at halftime.

“We wanted to set the tone early,” Jones said.

Arkansas opened the second half shooting much better and pushed its lead to as much as 52-32. Vanderbilt pulled within 59-48 on a 16-7 run capped by a three-point play by Lee. Sills answered with a 3, and Vanderbilt never got closer than 10 with 2:34 left.

Arkansas: The Razorbacks came in with the nation's best 3-point defense, and they held their 20th opponent to 29% or worse shooting outside the arc. Vanderbilt just 6 of 24 (25%).

Vanderbilt: The Commodores' biggest issue all season has been shooting woes leading to long scoring droughts. This was the second time Arkansas had held them to 25% or worse from 3-point range. ... Disu had his fifth double-double of the season.

“No thoughts,” Musselman said when asked about a technical late in the game. “There's a lot of good shopping here in Nashville, so let my wife spend the money and not give it to anybody else, so I refrain from saying anything.”

Vanderbilt: Stackhouse tries to build on a rough first season and will get leading scorer Lee back. He also started three freshmen in this game with Pippen starting his 31st of the season. Two other players sat out transfer years. “Next year I”m going to have a lot of little toys in my toy chest, and I can't wait to play with them," Stackhouse said.