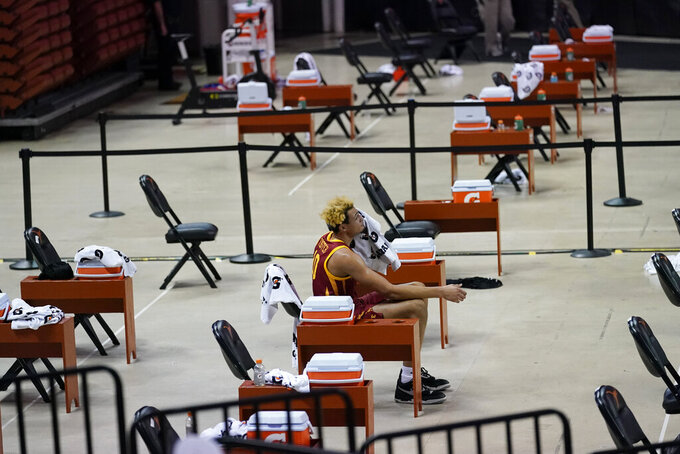 Iowa State forward Xavier Foster sits on the bench during the second half of an NCAA college basketball game against Texas, Tuesday, Jan. 5, 2021, in Austin, Texas. (AP Photo/Eric Gay)

AUSTIN, Texas (AP) — Andrew Jones scored 23 points and No. 4 Texas held off Iowa State 78-72 on Tuesday night to continue its torrid start to the season.

Texas (9-1, 3-0 Big 12) led by as much as 15 early in the second half and appeared to be cruising to an easy win over an Iowa State team that is still winless in conference play. But the Cyclones (2-6, 0-4) kept chipping away and made it tough for Texas to close out the game.

Jones' driving baseline layup with 2:40 to play gave Texas a 72-63 cushion. The Cyclones got within 75-70 when Javan Johnson converted a three-point play with 28 seconds left, but the Longhorns closed it out from the free-throw line.

Matt Coleman III added 13 points and Jericho Sims had 10 points and eight rebounds for the Longhorns.

Texas started the season at No. 19 and quickly catapulted to its highest ranking in a decade, with its a biggest win a 25-point road thumping of Kansas. Texas is 3-0 in the Big 12 for the first time since the 2010-2011 season.

The Longhorns had a sluggish start in their return home to an empty arena. Texas didn't allow any fans as the Austin area battles a surge of COVID-19 infections and hospitalizations.

Iowa State jumped to an early lead behind forward Solomon Young before the Longhorns sprinted to halftime with a closing fury that saw Jones slice his way for layups and Sims and Kai Jones dominate the Cyclones on the boards.

Texas turned its offense inside-out in the second half with three rapid-fire 3-pointers that pushed the lead as high as 15. Iowa State trimmed it under 10 before freshman Greg Brown made a 3-pointer from the left wing, then followed with a driving, stretching left-handed layup that put the Longhorns up 57-43.

The Cyclones wouldn't let Texas completely drift away, however.

Iowa State: Young finished with 13 points and eight rebounds, and gave the Cyclones what he could in his battles under the basket. But it was some freewheeling offense and shot-making in the second half that pulled the Cyclones close late. Finding that combination to counter Texas' muscle under the basket sooner might have led to a big road win.

Texas: The Longhorns are hopeful they are getting a late-career renaissance from Sims, who has spent much of his career facing questions about why he hasn’t produced more, but now seems ready to be a force in his final season. His double-double against Kansas was a huge factor in that win. Against Iowa State, Texas needed his muscular moves for early dunks and hustle for rebounds to match Young under the basket. His dunk and 3-point play sparked Texas' push toward its first lead midway through the first half. He finished with 10 points and eight rebounds.

Texas plays at No. 14 West Virginia on Saturday.