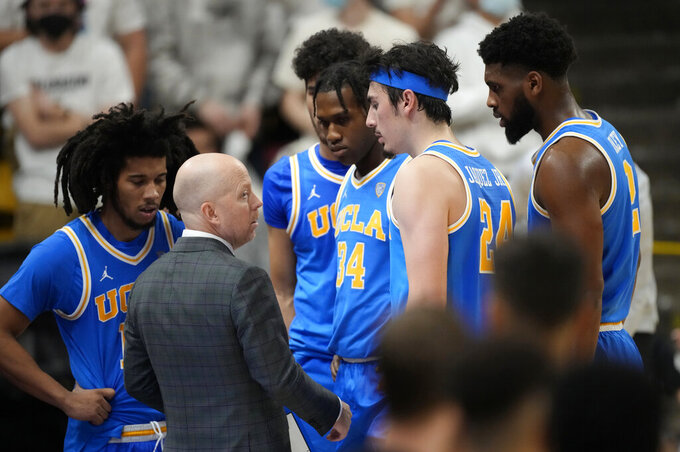 UCLA coach Mick Cronin confers with players during the second half of an NCAA college basketball game against Colorado on Saturday, Jan. 22, 2022, in Boulder, Colo. UCLA won 71-65. (AP Photo/David Zalubowski)

BOULDER, Colo. (AP) — UCLA coach Mick Cronin foresaw Colorado's comeback, warning his ninth-ranked Bruins they'd better not let up if they wanted an easy tuneup for next week's showdown against No. 3 Arizona.

“I told the guys we better get up 20,” Cronin recounted after the Bruins held off the Buffs 71-65 Saturday night. “But I didn't think it was gonna happen, just so you know.”

Sure enough, the Buffaloes, who trailed 43-28 at halftime, made it a one-possession game in the final minute after trailing by as many as 17.

The Bruins pulled it out by sinking several key baskets down the stretch — along with all six of their free throws in the final 16 seconds, beginning with a pair by Johnny Juzang, who led UCLA with 23 points.

Campbell's defender cut underneath, leaving him with an uncontested look, and he didn't hesitate to fire it off, not even after missing his first seven shots.

“Yeah, I never worry about missed shots. I work too hard every day, in the gym and off days to go out and miss a couple shots to stop shooting,” Campbell said.

The Buffs scored just seven baskets before halftime and trailed 43-28 at the break, but things changed.

"We went toe-to-toe with them in the second half,” Colorado coach Tad Boyle said. “In the first half, we weren't ourselves.”

The Buffs never could grab the lead despite their furious second-half rally that had the CU Events Center rocking. They had a chance to tie it at 65 when Jabari Walker, who led Colorado with 19 points, missed a layup as the clock ticked under 20 seconds.

Juzang sank both free throws with 16 seconds remaining to make it 67-63 and after another Walker misfire, Jules Bernard sank a pair of foul shots with 6.7 seconds left and he added two more with 1.6 seconds remaining.

The Buffaloes also lost a 61-58 heartbreaker to No. 16 USC on Thursday night. They fell to 0-5 against ranked teams this season, including 0-2 against the Bruins. Last year, they were 3-3 against teams in the top 25.

With the Bruins going cold after halftime, Colorado pulled to 53-47 with a little over eight minutes left on back-to-back buckets from Tristan de Silva, who went in when Walker limped off the court favoring his right leg with 10:35 left.

Walker returned with eight minutes remaining and scored on a fastbreak while being fouled by Jaquez with 3:50 left. The bucket made it 58-54 and his free throw after a timeout made it 58-55.

Juzang hit two jumpers and Campbell, who averages 12.1 points, made his only basket, to help fend off the Buffaloes, who scored just one basket in the final 8:06 of the first half.

“What a disappointing loss," Boyle said. "We shot ourselves in the foot. Second game in a row for turnovers, I thought it couldn’t get worse at 16, here we are at 21.

"But I got to tip my cap to our guys, they battled in that second half. This team has got fight, it’s got resilience, it’s got heart. We just have to understand the little things and every possession means something. We haven’t figured that out yet.”

After outscoring the Buffs 18-0 in points off turnovers in the first half, the Bruins watched their big lead dwindle to one point but they never lost the lead. The Buffs made it a contest but they'll lament their first half, when they hit just three 2-pointers.

With three straight wins, the Bruins have bounced back nicely from their overtime loss to Oregon. Now comes their showdown with No. 3 Arizona on Tuesday night, the biggest game in the Pac-12 this season — at least until Feb. 3, when they do it again in Tucson, Arizona.

UCLA: The big game vs. Arizona is Tuesday at Pauley Pavilion.

Colorado: The Buffs hit the road for three games, beginning with a trip to Oregon on Tuesday night.