K-State forced to reload after tying for Big 12 title 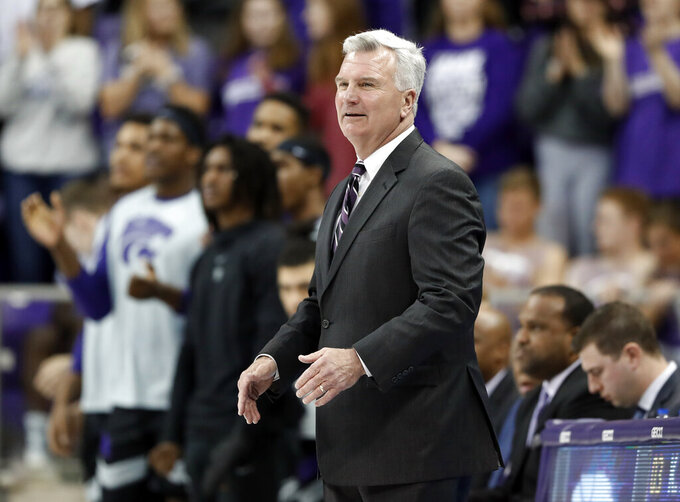 FILE - In this March 4, 2019, file photo, Kansas State head coach Bruce Weber watches his team play during an NCAA college basketball game against TCU in Fort Worth, Texas. Weber walked into the Kansas State practice gym a year ago knowing precisely what to expect, thanks in part to five returning starters and a bevy of experience sitting on his bench. (AP Photo/Tony Gutierrez, File)

MANHATTAN, Kan. (AP) — Bruce Weber walked into the Kansas State practice gym a year ago knowing precisely what to expect, thanks in part to five returning starters and a bevy of experience sitting on his bench.

Nobody outside that gym expected the Wildcats to have such success, though.

Now, after joining Texas Tech in ending rival Kansas' stranglehold on the Big 12, the Wildcats are hoping to build on their regular-season conference title. They have a tall task ahead of them after losing program linchpins Barry Brown, Dean Wade and Kamau Stokes to graduation.

"We knew last year, the guys we had back and who was going to be there every day," said Weber, who has finally endeared himself to Kansas State faithful after a lukewarm reception when he was hired.

"Now you've got experienced guys that have played, five guys that played good minutes in the Elite Eight and a Big 12 title team," Weber said, "but their roles are different now. Can they be consistent and can they be dependable? That's the key, I think, for our season."

The trio of Brown, Wade and Stokes led the Wildcats to 88 wins over their four years, but Weber answered their departure with one of his best recruiting classes. DaJuan Gordon is a high-scoring guard who could start right away and Antonio Gordon and Montavius Murphy provide punch in the paint, while junior college transfer David Sloan led the nation in assists last season.

Then there's the returning cast of characters.

Xavier Sneed thrived in a complementary role, and he briefly considered departing for the NBA before returning for his senior season. Fellow senior Makol Mawien is dependable inside while junior guards Cartier Diarra and Mike McGuirl have played important minutes in their careers.

The key for the Wildcats will be blending the old with the new.

"We have a whole championship DNA. It's self-replacing," said Sneed, who averaged 10.6 points and 5.5 rebounds last season. "Everybody has to step up and take on that next mantle."

Kansas State ran one of the slowest paces in major college basketball last season, and a big reason was its inability to score. That could be an even bigger problem now that Brown, Stokes and Wade moved on and put even more pressure on the highly rated Gordon to show some scoring chops.

"It isn't about starting or anything like that. I want to play," said Gordon, who starred at Curie High in Chicago. "I want to be in it to make moments at the end of the game."

Sloan averaged nearly 10 assists per game last season for John A. Logan College. If he can handle the point, that would free up Diarra and McGuirl to play their more natural positions on the wing.

There were times last season Mawien looked downright dominant, such as when he had 14 points and 12 rebounds trying desperately in vain to avoid losing to No. 11 seed UC Irvine in the NCAA Tournament. But there were also times, such as a game at Texas A&M, in which he didn't score at all.

"For him, it's the fine line of figuring out when to go and when not to go," Weber said. "He's got to really work on getting open shots because he can shoot. His field-goal percentage history is evident of that, and if we can figure out how to get open shots he'll make them."

Mawien is the only sure thing inside for Kansas State, but there are plenty of bodies behind him and someone needs to emerge. Gordon and Murphy are the most talented but also freshmen. Levi Stockard III is a bruising without much scoring touch. Nigel Shadd hasn't played much his first two seasons, while James Love III at 6-foot-11 is the biggest body but also remains raw on both ends of the floor.

Kansas State opens the regular season against North Dakota State on Nov. 5 before an intriguing trip to UNLV. The Wildcats also face Pittsburgh in the Fort Myers Tipoff in Florida, welcome Marquette to Bramlage Coliseum and face Mississippi State in the Tribute Classic in Newark, New Jersey.