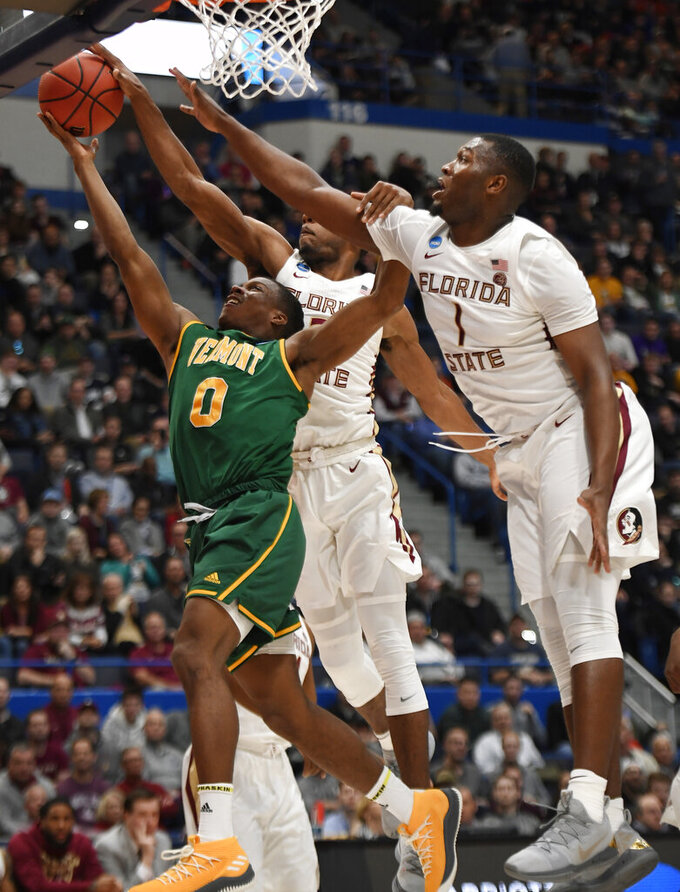 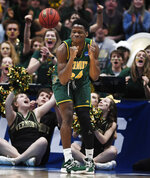 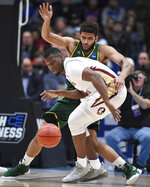 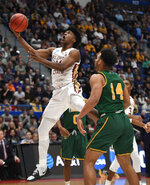 In the end, the Seminoles were just too long and too strong for the upset-minded Catamounts.

Mfiondu Kabengele had 21 points and 10 rebounds, and Florida State withstood a barrage of 3-pointers from 13th-seeded Vermont in a 76-69 victory Thursday in the opening round of the NCAA West Regional.

Terance Mann added 19 points for the fourth-seeded Seminoles (28-7), who were tied with the Catamounts at halftime but pulled away late.

"I thought we exercised physicality, the quality of our depth, our athleticism and strength in the second half, getting the ball to Mfiondu," said FSU coach Leonard Hamilton. "I thought he was a little bit bigger, stronger and taller."

Anthony Lamb had 16 points to lead a balanced, long-range attack for Vermont (27-7), which lost for the first time in seven games. Three Catamounts — Stef Smith, Ernie Duncan and Ben Shungu — each finished with 15 points.

The America East champions went small — no starter stood over 6-foot-6 — and stayed close by hitting 16 of 32 3-point attempts. The Seminoles countered by wearing out Vermont down low, outscoring the Catamounts 30-14 in the paint. Vermont had just seven baskets from inside the arc.

A dunk by Kabengele gave Florida State a 50-45 lead with nine minutes left, part of a 6-0 run that put the Seminoles ahead for good. Another by the 6-10 sophomore made it 61-53, and the cheers of Vermont fans, who made the four-hour drive south from Burlington, gave way to the tomahawk chop from behind Florida State's bench.

Florida State led by 12 with just over a minute left and withstood a late run by Vermont.

Vermont, which outrebounded Florida State 20-18 in the first half, was outmuscled underneath and lost the rebounding battle 21-13 in the second.

"I think when the kid (Kabengele) stepped through a triple team and dunked it, it was kind of telling that we were wearing down," he said.

Ernie Duncan hit two early 3-pointers and the much smaller Vermont team jumped out to a 10-4 lead. The America East champions hit four of their first six shots from 3-point range and built the lead to nine points.

The Seminoles responded with defense, holding Vermont without a basket for more than five minutes. They took their first lead at 17-16 on a pair of free throws by RaiQuan Gray, part of a 14-0 run that saw them take a 21-16 lead.

Vermont had ten baskets in the first half and seven of them were from behind the arc.

Florida State says forward Phil Cofer received a phone call from his family after the game telling him his father had died.

Team spokesman Chuck Walsh says Mike Cofer, a former linebacker with the NFL's Detroit Lions, had been suffering from a long illness.

Cofer had missed the game with an injured right foot and was wearing a protective boot on the bench. The 6-foot-8 senior has averaged 7.4 points and 3.5 rebounds. He missed the Seminoles' first nine games of the season with a right foot injury suffered during a preseason practice.

Hamilton said Cofer had some swelling in the foot after playing in the ACC Tournament.

Vermont: Ernie Duncan, Everett Duncan and Robin Duncan became the first trio of brothers to ever play in the same NCAA Tournament game. Ernie, a senior, finished with 15 points. Everett, a junior, had three, and freshman Robin scored one. Vermont officials say the Duncans are just the fifth trio to play on the same Division I men's team.

"It was a really cool thing and it wasn't a lot of work on my end," Becker said of having the brothers play together this year. "A couple of times I had to break up an argument and sent them to their rooms, so to speak. But, for the most part, they were a joy to coach and really easy.

"For them I think the last week has just been a dream, and I'm glad that we could help make that come true," he added.

The 28 wins are the most in the history of Florida State basketball, topping the 27-6 record of the 1971-72 team, which made it to the national championship game.

Florida State will play either Murray State or Marquette in the second round on Saturday.