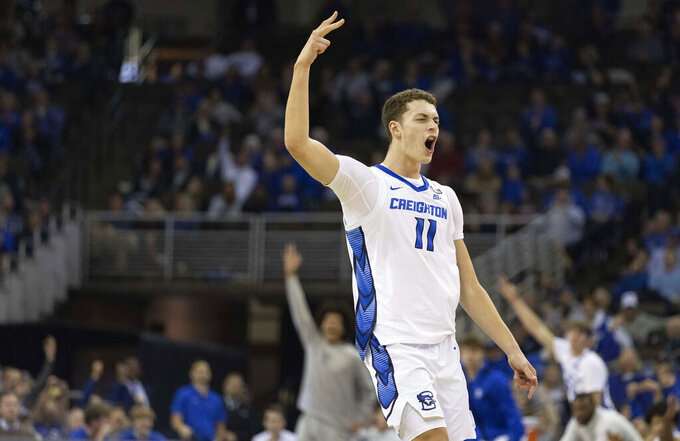 Creighton's Ryan Kalkbrenner (11) reacts after hitting a 3-point basket against Holy Cross during the first half of an NCAA college basketball game on Monday, Nov. 14, 2022, in Omaha, Neb. (AP Photo/Rebecca S. Gratz)

OMAHA, Neb. (AP) — Ryan Kalkbrenner scored 17 of his 22 points in the first half, Ryan Nembhard had a career-high 12 assists and No. 10 Creighton blew out Holy Cross 94-65 on Monday night.

The 7-foot-1 Kalkbrenner made all 10 of his shots from the field — seven were dunks. He gave fans a treat when he launched, and made, a rare 3-pointer before the Bluejays (3-0) went to the locker room with a 52-27 lead at halftime.

Nembhard and Kalkbrenner teamed up for four lob dunks in the first half against their outmanned opponents from the Patriot League.

Creighton coach Greg McDermott had gone nine players deep less than seven minutes into the game, and four of his starters were done for the night with 11 minutes remaining.

Arthur Kaluma and Ben Shtolzberg had 13 points apiece for the Bluejays. Their 28 assists were their most since they had the same number in a win over Nebraska on Dec. 1, 2020, and Nembhard was the first Creighton player in 20 years to have a dozen assists without a turnover.

“Coach McDermott and his staff have done a great job putting that roster together,” Holy Cross coach Brett Nelson said, "and when they're making shots like they did tonight, they're really, really hard to guard."

Bo Montgomery shot 5 of 6 on 3s and matched his career high with 21 points for the Crusaders (1-2). Gerrale Gates added 16 points for Holy Cross, which was 8 of 17 from long distance.

Holy Cross typically starts no one bigger than 6-6, but Nelson gave 6-10 third-year player Michael Rabinovich his second start in 23 career games in an attempt to match up with Kalkbrenner.

It really didn't matter who tried to guard the preseason All-Big East center. Kalkbrenner, coming off career-high 24-point game on 10-of-11 shooting against North Dakota, scored 10 straight points in the first four minutes.

Gates, who gives up 7 inches to Kalkbrenner, took a turn on him and the big man scored on a lay-in and another dunk. Then the 6-6 Caleb Kenney gave it a try, and Kalkbrenner dunked again.

Late in the first half, the building went nearly silent as Kalkbrenner set up to shoot his 3-pointer from above the top of the key. The crowd roared as the ball went through for his first 3 of the season and fourth in 16 attempts over 68 career games.

Kalkbrenner has made 19 straight shots from the field over two games.

“My teammates have done a good job of putting me in a good position,” Kalkbrenner said, “so I take good shots. I don't think any of the shots I've taken have been too hard, and that's a credit to the guys I play with. They're good at creating opportunities for other people, and I get the benefit from that."

Creighton athletic director Marcus Blossom was the point man for scheduling the game, which netted the Crusaders a nice paycheck. Blossom was AD at Holy Cross before taking the Creighton job last year.

Creighton: The Bluejays have opened with three straight double-digit wins in “buy” games and get one more tune-up before measuring-stick games against ranked opponents next week at the Maui Invitational.

Creighton hosts UC Riverside on Thursday and then it's off to Hawaii for bigger challenges.