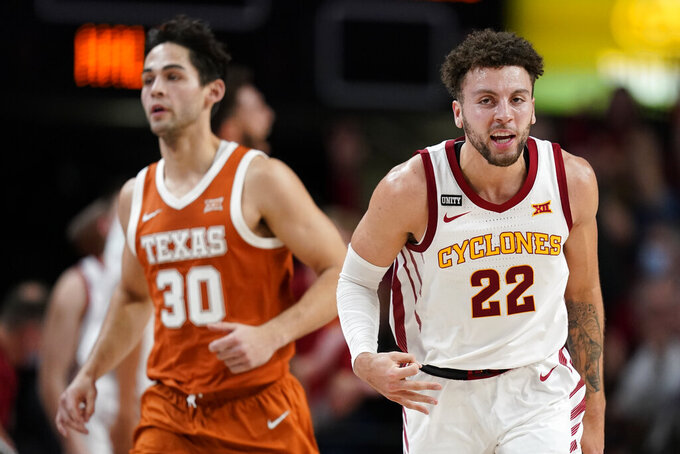 “He brings so much defensively every night,” Iowa State coach T.J. Otzelberger said of Kalscheur. “He does so many winning things. I think when you do those aggressive things over and over, when you continue to stay in the gym and get shots, at some point it comes around for you.”

After a sluggish start, Iowa State ended up shooting 57% and forced 20 Texas turnovers.

“From our perspective, we had to come in here and win the game and we didn't do that,” Longhorns coach Chris Beard said. “Obviously, turnovers were a big, big problem for us.”

The Cyclones made just one of their first nine shots but started to take control midway through the first half. A 3-pointer by Kalscheur put Iowa State ahead 19-16, followed by a steal and layup by Caleb Grill.

Kalscheur later capped an 8-0 run with a pull-up jumper that gave the Cyclones a 34-22 lead with 3:55 left before halftime.

“I just continue to stay confident with who I am,” Kalscheur said, “and enjoy it.”

Kalscheur's fourth 3-pointer extended another 8-0 run and pushed Iowa State's margin to 51-36 early in the second half.

“I see the work that he puts in on a daily basis,” Hunter said of Kalscheur, “and it showed tonight.”

The Longhorns never drew closer than 67-62.

Iowa State continued to bolster its case for an NCAA Tournament bid with its fourth win over a ranked opponent. Saturday's win also ended a stretch of three losses in four games after a 12-0 start.

Texas was seeking its eighth win in nine games.

Iowa State visits No. 19 Texas Tech on Tuesday, having faced ranked teams in four of its first five Big 12 games.

Texas is home for its next two games, Tuesday against Kansas State and Jan. 22 against Oklahoma State.