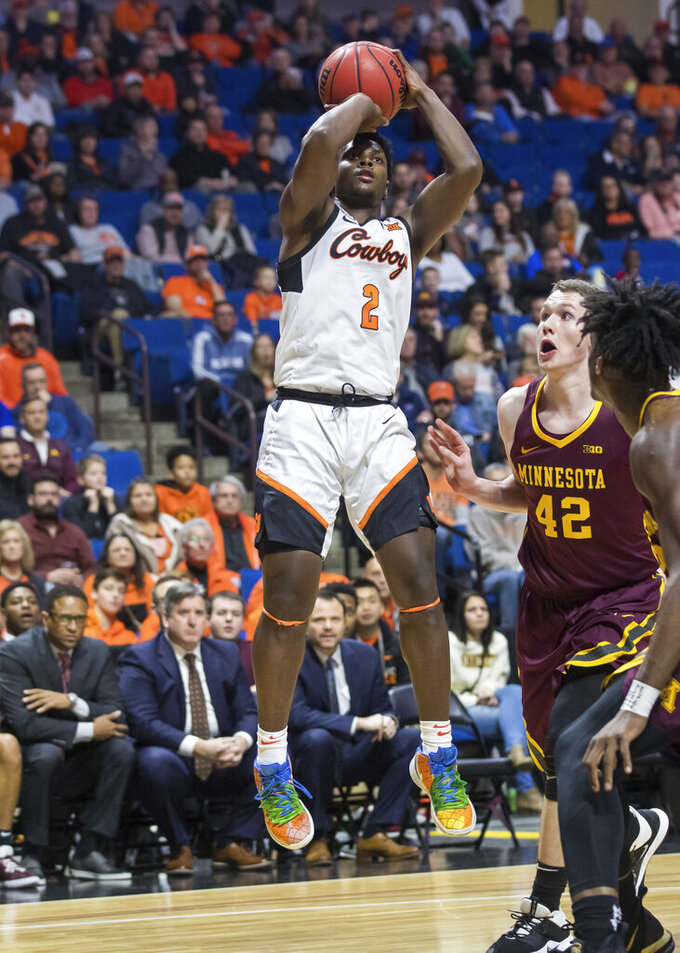 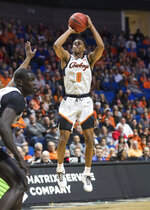 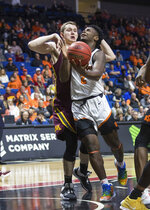 TULSA, Okla. (AP) — Minnesota had yet to win a game this season outside of Williams Arena in Minneapolis, so their so-called neutral-site game on Saturday against Oklahoma State in Tulsa was a big test.

Gabe Kalscheur scored 24 of his career-high 34 points in the first half to help lead Minnesota to an 86-66 victory, about 70 miles from Oklahoma State’s campus.

Gophers coach Richard Pitino believes that his team, which was 0-4 in away games, learned some lessons from its tough nonconference schedule.

“We’ve played one of the toughest schedules in the country, it’s not even close, and although it’s disappointing when you’re losing games, I think they’re learning from every game,” Pitino said. “They’ve really been able to bounce back. I think our guys are really responding. I think maybe if we didn’t play Butler or Oklahoma or Utah, we don’t play the way we play tonight.”

Kalscheur connected on 11 of 14 shots from the floor, including 7-of-9 on 3-point attempts, and surpassed his previous season-high of 18 points in the first half.

“Just locked in,” said Kalscheur, who had zero points and shot 0-of-10 from the floor in a 72-52 loss at Iowa two games earlier on Dec. 9. “I’m a shooter, and for all shooters, you’re going to have some off-days, some droughts in your shooting, but you just always got to stay confident, stay with it, and that’s what I try to do.”

Daniel Oturu contributed 22 points (on 10 of 12 shooting) and eight rebounds for Minnesota (6-5, 1-1 Big Ten), who was missing starting guard Payton Willis because of an ankle injury.

“Minnesota just outplayed us,” said Cowboys coach Mike Boynton. “I think watching that game from start to finish, one of the worst things you can say about your team after any game is that the other team played harder than you did. Unfortunately, I have to stand here and be honest and say that was the case that Minnesota played harder and therefore deserved to win.”

The performance was particularly disappointing for Boynton following Oklahoma State's impressive 61-55 win over Houston on Dec. 15.

“What we’ve got to learn how to do is handle prosperity,” Boynton said. “It’s evident today, and with last week’s practices, that we have to be a team that learns how to handle success and we’re still not there yet.”

The Cowboys are now 1-3 in their last four outings, which coincides with the illness that has sidelined Isaac Likekele, their starting point guard and leading scorer who averages 13.7 points, 5.3 rebounds, 5.0 assists and 2.9 steals per game.

Minnesota: One game after a signature victory, an 84-71 statement win over then-No. 3 Ohio State on Dec. 15, the Golden Gophers came out strong once again. They surged to an eight-point lead just six minutes into the contest and after Oklahoma State tied it at 24 with 8:54 left in the opening half, the Gophers dominated until the break. Kalscheur scored 16 points over the next six minutes as Minnesota outscored Oklahoma State 22-5 to build up a commanding 17-point advantage, ultimately taking a 46-31 lead into halftime.

Oklahoma State: The Cowboys started out shooting well, connecting on 10 of their first 15 shots from the floor and pulling even at 24 with 8:53 left in the first half on Waters’ 3-pointer, but they couldn’t sustain it. Oklahoma State made just two of its last 10 shots to finish the half, then sank just two of 11 over of the first eight-plus minutes of the second half, falling behind by 26 points over that span. After Minnesota built its lead up to 71-42 with 9:22 remaining, the Cowboys played better offensively, including a late 9-2 run that got them to within 14 with 2:40 left, but it wasn’t nearly enough.

Minnesota guard Marcus Carr, who averages 15.2 points per game and delivered a career-high 35 points in the Gophers’ big win over then-No. 3 Ohio State on Dec. 15, ended up with just nine, his third-lowest output of the season. But despite shooting just 2 of 12 from the floor, Carr still contributed seven rebounds and eight assists, while being the only player on either team to play all 40 minutes.

Minnesota outrebounded Oklahoma State 35-27, including 14-10 in the first half. … Tre’ Williams started at guard for Minnesota in place of the injured Willis, for his first career start. In 19 minutes, he had three points and a career-high three assists. … After playing just one minute in the previous game against Ohio State, Minnesota forward Michael Hurt played 28 minutes, scoring a season-high seven points.

Minnesota: The Gophers return home to take on Florida International next Saturday afternoon.

Oklahoma State: The Cowboys are back home in Stillwater to host Southeastern Louisiana on Dec. 29 in their last nonconference contest.