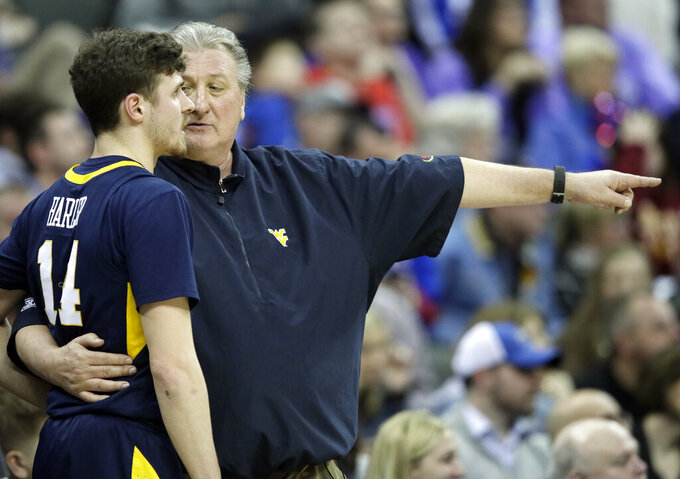 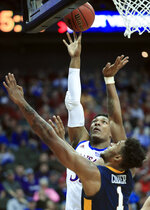 He'll have that chance Saturday night.

The former Memphis standout scored 24 points and the No. 17 Jayhawks, who failed to win a share of the Big 12 regular-season title for the first time in 15 years, roared into the conference tournament title game with an 88-74 victory over West Virginia on Friday night.

Quentin Grimes added 18 points before leaving late with cramps, Devon Dotson had 13 and Marcus Garrett 11 for the third-seeded and reigning champion Jayhawks (25-8). They advanced to the final for the third time in four years and will face fifth-seeded Iowa State.

"We need to learn how to close something out, and we get that opportunity tomorrow," Jayhawks coach Bill Self said. "They have the same opportunity. It's going to make for a great game."

The 10th-seeded Mountaineers (14-20) led much of the first half and hung tough early in the second, but three games in three days finally caught up to them. Tough wins over Oklahoma and No. 8 Texas Tech left them with tired legs — probably minds, too — and the Jayhawks eventually went on a 13-2 run midway through the second half to seize control.

The lead reached 20 with 7 1/2 minutes to go, and the Jayhawks cruised the rest of the way.

"I don't want to blame fatigue," Culver said. "Just lack of paying attention to what is going on around you. I'll be the first one to blame. We just got to go back to the drawing board."

Kansas has won the tournament 11 times, and Iowa State is unbeaten in four championship trips, but the two teams have met in the finals just once: The Cyclones won 70-66 in 2015.

Grimes has struggled with his shot most of the season, to say nothing of living up to his five-star status out of high school. But the freshman guard found his stroke from the opening minute, when he buried the first of five first-half 3-pointers to get the Jayhawks off and running.

West Virginia pulled ahead midway through the half, but Grimes added three more 3s to regain the lead, then hit a buzzer-beater from 30 feet to give the Jayhawks a 48-40 advantage.

"He was the reason for the run," West Virginia coach Bob Huggins said. "He was very good."

Lawson fueled their clinching run, getting it started with an easy basket and added another bucket and a 3-pointer during the 13-2 charge. By the time Garrett finished it off, a crowd heavily in favor of Kansas was buzzing about the opportunity to face the Cyclones.

"I bet Iowa State has 70 percent of the building tomorrow," Self said. "You play that first game and you win, you can hustle the tickets off the team that doesn't win. And they're pros at hustling tickets in Kansas City. It'll be the first time in a long time we haven't had a comparable home court, I'd predict. It should be a fun game."

The Jayhawks were ahead 75-58 with 6:33 left when West hit a pair of free throws. Freshman big man David McCormack gathered the ball while standing out of bounds and tossed it to Garrett for the inbounds. But when Garrett stepped over the out-of-bounds line, it wound up being a turnover, and Self immediately called timeout to lay into his team on the bench.

West Virginia lost four players to injuries, transfers and dismissals, and it left them with very little depth. That appeared to play a factor in the second half, when the Jayhawks began to get up and down the floor and the Mountaineers were unable to keep up.

Kansas has played this week with a chip on its shoulder after failing to win a share of the regular-season title. Now, the Jayhawks have a chance to match the 1999 team by winning the tournament as a No. 3 seed, and perhaps help their NCAA Tournament seeding on Selection Sunday.

Kansas plays the Cyclones for the championship Saturday night.