Kansas finishes No. 1 in final AP poll; Gonzaga, Dayton next 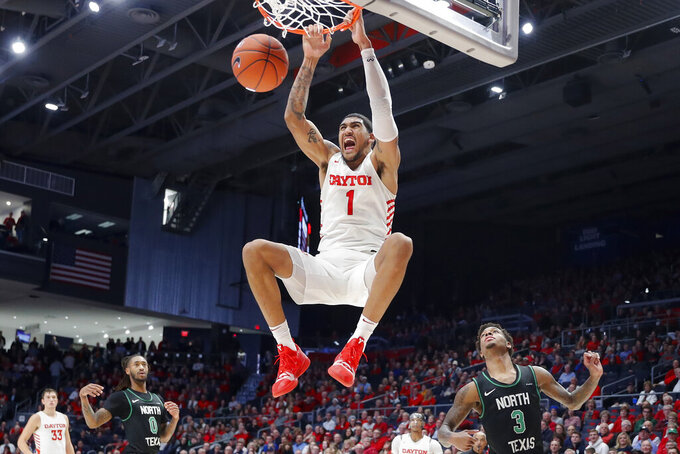 FILE - In this Dec. 17, 2019, file photo, Dayton's Obi Toppin (1) dunks as North Texas' Javion Hamlet (3) looks on during the second half of an NCAA college basketball game in Dayton, Ohio. Kansas finished the season No. 1 in The Associated Press college basketball poll, Wednesday, March 18, 2020. Dayton was third behind breakout stars Jalen Crutcher and Obi Toppin, the leading candidate for national player of the year. (AP Photo/John Minchillo, File)

LAWRENCE, Kan. (AP) — Kansas coach Bill Self has spent much of the past week mulling ways to commemorate one of the more remarkable seasons in the school's proud basketball history, one that began with off-the-court distractions too numerous to count and ended in the unprecedented cancellation of the NCAA Tournament.

The Jayhawks can start by celebrating their finish atop the final Top 25 from The Associated Press.

The regular-season Big 12 champions, who were 28-3 when the season abruptly ended after the first day of the conference tournament last week, received 63 of 65 first-place votes from a national media panel in balloting released Wednesday. That easily outdistanced No. 2 Gonzaga and No. 3 Dayton, each of which received a first-place vote.

“Nobody in America had better season than we did,” Self said. “How do you give credit to that effort and have it be recognized? And I don't know exactly how we do it. Do we do it within our own fan base? Do we do it within podcasts or whatnot? Whatever we've come up with so far pales in comparison to the accolades they deserve.”

It's the fourth time since the inception of the men's poll for the 1946-47 season that Kansas finished on top, though typically there would still be March Madness to play. The AP does not declare a national champion in the sport because of the tournament.

The final rankings were based on play through March 11, when the outbreak of the coronavirus brought the sport to a halt.

The Jayhawks claim five national championships, the most recent in 2008 after they beat Memphis in the NCAA Tournament title game. But despite a season in which 353 teams played thousands of games and Kansas finished as the clear-cut No. 1, the school's Hall of Fame coach was unwilling to stake claim to any kind of championship.

“That's not the way this is all intended to be,” Self said. "Coaches prepare their teams to peak at certain times. I'm proud of how our team prepared all season but especially at the end of the season, we were terrific. We operated under some pressure and dealt with some stuff. From our standpoint, sure, that would be great, but even if that were to occur, there would be a huge asterisk next to it, and I would agree with that.”

Gonzaga (31-2) finished second after beating Saint Mary's in the West Coast Conference finals, one of a handful of league tournaments that were completed. But the Bulldogs will be left to wonder whether another dominant team from coach Mark Few would have finally delivered the school a national championship.

Dayton (29-2) was third behind behind breakout stars Jalen Crutcher and Obi Toppin. That matched the 1955-56 team led by Bill Uhl and Jim Paxson for the best finish in program history.

“The voters who deemed us worthy to be one of the top five teams in the country and finish in the poll in the top three, we appreciate that,” Flyers coach Anthony Grant said. “Having that recognition hopefully is something — another thing that you can look back on and will be in the history books, that this team was able to accomplish a top-five ranking.”

Florida State (26-5) was fourth in the final poll, easily the best finish ever for the Seminoles, while Baylor (26-4) rounded out the top five after spending a longer stretch at No. 1 than any other team during a topsy-turvy season.

“I think ‘historical’ always sums up a season when you're able to set so many records and accomplish so many things," said Bears coach Scott Drew, whose team was in the running for a No. 1 seed in the NCAA Tournament after finishing second to Kansas in the Big 12 race. “This group really got along well. It is a group that really loved one another, spent time with one another, and they were always positive, and that led us to having a historical year."

REST OF THE POLL

No. 11 Duke finished outside the top 10 for only the second time since 2007, while Maryland, Oregon, Louisville and Seton Hall came next.

The rest of the Top 25 included reigning national champion Virginia at No. 16, followed by Wisconsin, BYU, Ohio State and Auburn. The final five in the poll were Illinois, Houston, Butler, West Virginia and Iowa.

BEST OF THE REST

The first two teams outside the poll were two teams with a good chance to have been NCAA Tournament darlings — or break a whole lot of brackets. Stephen F. Austin was 28-3 with a win over Duke at Cameron Indoor Stadium in November. East Tennessee State went 30-4 and went toe-to-toe with the Jayhawks before losing at Allen Fieldhouse.

Among those also receiving votes in the final poll were Michigan, which climbed as high as No. 4 early in the season; Penn State, which was looking forward to its first NCAA Tournament appearance in nine years; Texas Tech, which slumped a bit after its national runner-up finish a year ago; and back-to-back Atlantic Sun champion Liberty.