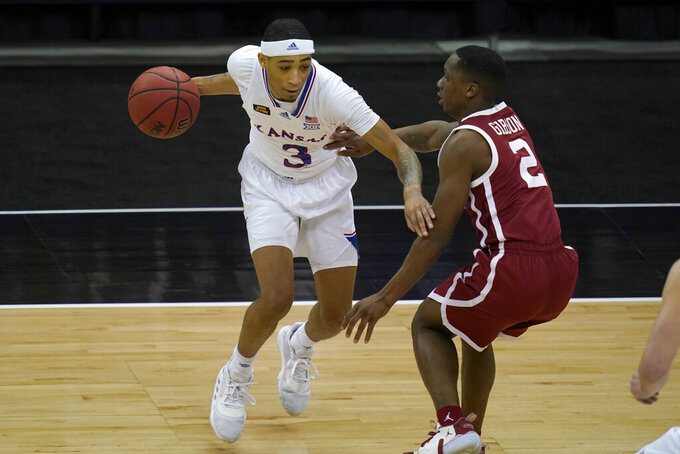 Kansas guard Dajuan Harris (3) drives on Oklahoma guard Umoja Gibson (2) during the first half of an NCAA college basketball game in the quarterfinal round of the Big 12 men's tournament in Kansas City, Mo., Thursday, March 11, 2021. (AP Photo/Orlin Wagner)

It ended with the Jayhawks withdrawing from the Big 12 Tournament when the men's basketball program, which was finally hitting its stride, returned a positive COVID-19 test following a quarterfinal win over Oklahoma.

Now, after one of the worst works imaginable for the Jayhawks, Bill Self's team — at least, those healthy enough — was headed to Indianapolis on Monday to begin preparing for the NCAA Tournament. They earned the No. 3 seed in the West Region thanks to their late-season charge and will play No. 14 seed Eastern Washington on Saturday.

For a few fleeting weeks, they can give their fans a reason to forget about all the other issues taking place in Lawrence.

“I think they were proud of themselves, to be honest. I think they feel good about themselves,” Self said. “Not good that we accomplished something, just that so far, so good. We put ourselves in a decent position. We have to take advantage.”

It won't be easy.

The Jayhawks already were without starting center David McCormack and backup forward Tristan Enaruna for the Big 12 Tournament after they were put in quarantine early last week. Then came the positive test on Friday, which means at least three players were not with the team when it flew out of Kansas City.

Self believes McCormack and Enaruna will have returned the seven straight days of negative tests to rejoin the team before the first round, but the other player likely will miss the opening weekend — Eastern Washington and a potential game with No. 6 seed USC or one of the two No. 11 seeds playing a First Four game, Wichita State and Drake.

At least the Jayhawks have an NCAA Tournament in which to play.

They were the heavy favorites to land the overall No. 1 seed last season and, behind star guard Devon Dotson and bruising big man Udoka Azubuike, the betting choice to cut down the nets at the Final Four. But when the tournament was canceled due to the pandemic, it left one of Self's best teams to wonder what might have been.

“We know last year we didn't get to play in March Madness and this year we're just ready for the opportunity,” said senior Marcus Garrett, who was a member of the 2018 team that lost to eventual champion Villanova in the Final Four.

Another trip to the Final Four? That would make people forget about everything else going on.

The Jayhawks are just days into their search for a new athletic director, and they won't even begin searching for a football coach until that is done, which means spring practices will begin with an interim coach and plenty of uncertainty.

There is also strain within Self's program, which is awaiting an independent panel's decision on whether Kansas will be hit with NCAA sanctions from alleged Level I violations tied to an FBI investigation into college basketball corruption.

“You know,” junior Ochai Agbaji said, “kind of looking back at January, how we struggled through, seeing we got a 3-seed — it was good for us going into this tournament. It has a lot of people excited. Everyone is excited on the team, too.”

The path to the final weekend won't be easy, though. Eastern Washington is a plucky first-round opponent, and USC has an All-American candidate in Evan Mobley presenting a problem inside if both teams advance. If the Jayhawks reach the Sweet 16, they could face Luka Garza and No. 2 seed Iowa, and overall No. 1 seed Gonzaga tops the West Region.

The Bulldogs beat the Jayhawks in an entertaining game in late November to tip off a season unlike any other.

“Since that's the draw we got, I might as well be comfortable with it,” Self said. “I don't think anybody is going to pick anybody but Gonzaga to be a Final Four team. So to get to the Final Four, you're going to have to beat them.”