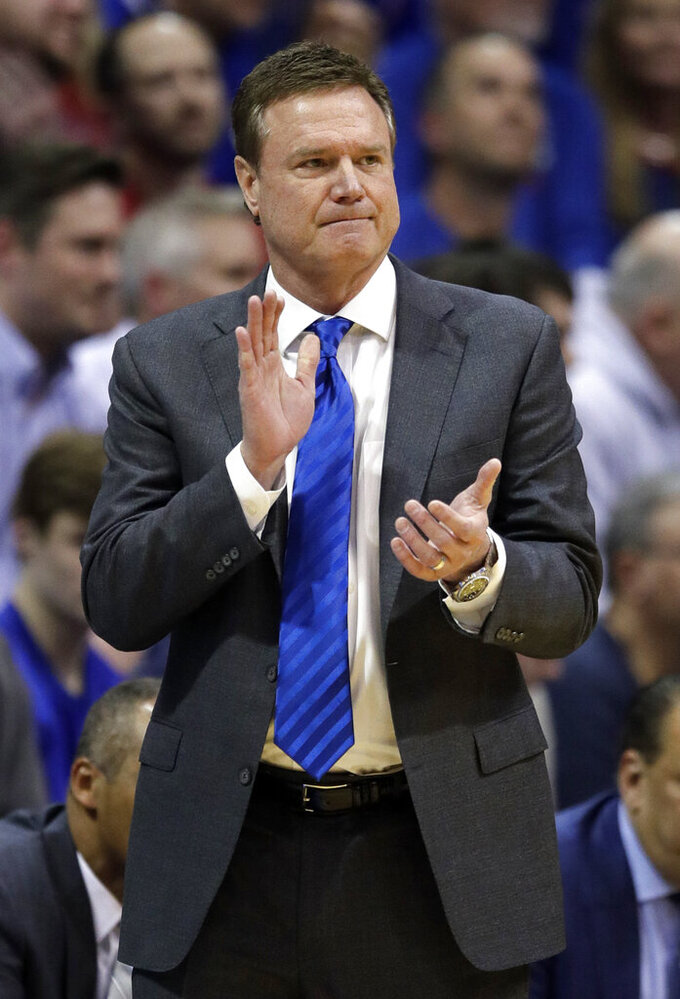 Kansas head coach Bill Self applauds his team during the second half of an NCAA college basketball game against Kansas State in Lawrence, Kan., Monday, Feb. 25, 2019. (AP Photo/Orlin Wagner) 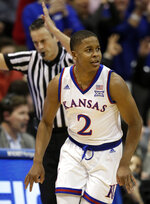 LAWRENCE, Kan. (AP) — Bill Self seemed to be searching the air inside Allen Fieldhouse for an answer, trying in vain to think back nearly 15 years to a time Kansas did not control its own destiny in the Big 12 title race.

"I don't know that I can remember a time," Self said at long last.

Other than this year, of course.

The No. 15 Jayhawks kept alive their hopes of winning an unprecedented 15th consecutive crown with a dominant 64-49 victory over league-leading Kansas State on Monday night. But they are still a game back of the Wildcats with three games to play — two of which are on the road, where Kansas has struggled all season — and trail Texas Tech by a half-game heading into the finishing stretch.

None of those three contenders plays each other the rest of the way, which means everybody from TCU to Oklahoma State will have a say in whether the Jayhawks' streak lives on another year.

"Going into the last three," Self said, "I don't know a situation where if we didn't win out we wouldn't win it. But yeah, I'm not worried about the streak. I'm worried about his team trying to compete for it. We've been so poor on the road. We just need to get a win in Stillwater (on Saturday), and if we get a win in Stillwater we can talk about it. But we have to get a win on the road."

Kansas is just 2-7 away from home, lowlighted by a humiliating 29-point blowout loss at Texas Tech last weekend. They lost by 17 at Iowa State. They lost at West Virginia, one of the Mountaineers' two Big 12 wins. They were dumped by 10 at Texas and roughed up three weeks ago at Kansas State.

The rest of the Top 25 entering Tuesday night's games were a combined 159-62 away from home, and the only ranked team that doesn't have a winning record is Purdue at 5-5.

Kansas (21-7, 10-5) had better figure out its road woes soon. Its next two games are at Oklahoma State and Oklahoma.

"We know we've got to run the table," Self said. "We have to have some good things happen, and we have no margin for error whatsoever. We know that. But I'd rather be in the game than not in the game, and we are capable of playing a heck of a lot better on the road than we have."

The Jayhawks have started four freshmen down the stretch, losing veteran big man Udoka Azubuike to a season-ending wrist injury and senior guard Lagerald Vick to personal issues. That's left a leadership vacuum that nobody has been able to fill, even though freshman guards Quentin Grimes, Devon Dotson and Ochai Agbaji have proven to be wildly talented and full of potential.

The road games have also been anything but easy. With the exception of the loss to West Virginia, all the games Kansas has dropped on the road have come against NCAA Tournament-caliber opponents.

Their two road wins, at TCU and Baylor, likewise came against teams in the postseason discussion.