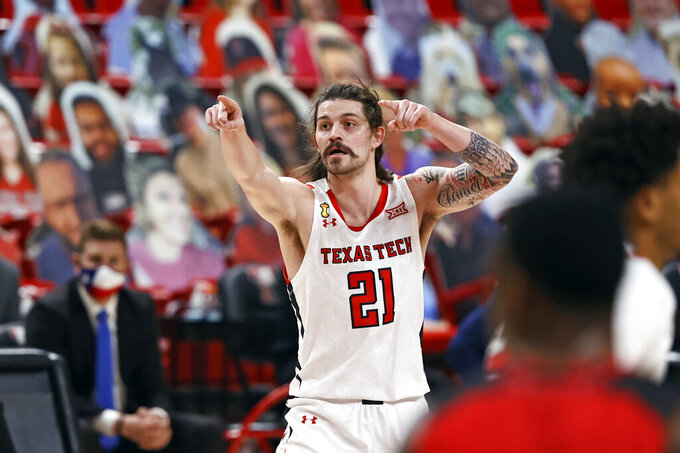 Third-ranked Kansas has proven its chops since losing to top-ranked Gonzaga in its opener, ripping off eight straight wins with two against top-10 opponents and four against ranked teams. Among them are consecutive wins over No. 14 Texas Tech and No. 7 West Virginia, giving the Jayhawks a big boost early in league play. Now, they'll try to keep the momentum going when eighth-ranked Texas visits Allen Fieldhouse on Saturday. The Longhorns lost to Villanova in their only game against a team still ranked in the Top 25, so this is an important opportunity to prove they are legit.

Everybody in the Big 12 will be in action on Saturday, many of them coming off long breaks for the holiday. Second-ranked Baylor visits Iowa State, ninth-ranked West Virginia heads to Oklahoma, Oklahoma State visits No. 13 Texas Tech and TCU heads to Kansas State. The Mountaineers and Cowboys have a quick turnaround with a game Monday night in Stillwater.

Greg Brown and Andres Jones will need to have big games against Kansas if the Longhorns want to keep their winning streak going. And they're both coming off impressive games against Oklahoma State. Brown, a 6-foot-9 freshman forward, had 24 points and 14 rebounds in just 26 minutes, and Jones tied his career high with 22 points. Brown made three free throws in the final 20 seconds to preserve the 77-74 victory.

Cowboys freshman Cade Cunningham, the Big 12's leading scorer, had 25 points in their loss to Texas. ... West Virginia's Derek Culver, Oscar Tschiebwe and Emmitt Matthews combined to go 18 of 26 from the floor in a victory over Northeastern. Tschiebwe had his second double-double with 12 points and 15 boards. ... Kansas set a school record for 3-point attempts with 37 in its victory over the Mountaineers. The Jayhawks made 16 of them, one shy of tying the record for a conference game. ... Iowa State held Jackson State to 14-of-58 shooting in a 60-45 victory. That's the lowest shooting percentage by a Cyclones opponent since Dec. 31, 2014. ... Kansas State has won four of its pat five games after Selton Miguel's winning shot against Omaha. The Wildcats' lone loss came against Baylor.

Kansas State had its games against Oklahoma and West Virginia postponed following an uptick in COVID-19 tests within the Wildcats program. ... Oklahoma State's Natasha Mack had a career-high 31 points and 14 rebounds in a win over North Texas to earn Big 12 player of the week. ... Emily Ryan of Iowa State had 20 points and 10 assists against Drake to earn the Big 12 freshman of the week honor. ... The Lady Bears broke a school with their most points in consecutive games, scoring 253 in wins over Northwestern State (136) and McNeese State (117). ... Texas has scored at least 20 points off turnovers in every game this season. .The Longhorns forced Kansas State into 34 turnovers and created 38 points in their game Dec. 21.