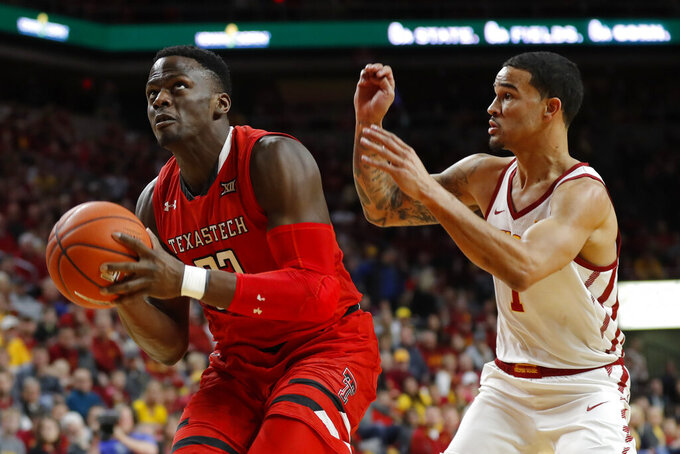 KANSAS CITY, Mo. (AP) — Just about the only good thing that comes with failing to win at least a share of the Big 12 title for the first time in 15 years is Kansas knows its first-round opponent in the league tournament.

It's not much. But it's something.

The No. 3 seed Jayhawks, who were trumped by Kansas State and Texas Tech during the regular season, will face sixth-seeded Texas in the nightcap of the quarterfinals Thursday. It will be an opportunity for a group responsible for the end of one of college basketball's remarkable streaks to win a championship ring whenever the season finally concludes.

"Whether I want to admit it or not, it's deflating not winning the league," said coach Bill Self, whose team arrives at Sprint Center as defending champs. "For us to win the tournament in Kansas City, we're going to have to beat three teams that are all quadrant-one teams and all that stuff.

"It's going to be hard to do. We know that," Self said. "But we've done it before. We did it last year and we're certainly capable of going over there and putting together a nice run. I think it'll be good for us to get our batteries recharged."

The tournament opens Wednesday night, when eighth-seeded TCU faces No. 9 seed Oklahoma State (12-19) and seventh-seeded Oklahoma plays No. 10 seed West Virginia (12-19). The Horned Frogs (19-12) and Sooners (19-12) are both in a precarious NCAA Tournament position heading into the weekend.

The Longhorns (16-15) are in a similar position, even though they earned a better seed and a tougher draw. A loss to the Jayhawks (23-8) would leave coach Shaka Smart's team at .500, and an at-large bid with that kind of mark — even in the rugged Big 12 — is hard to imagine.

"We've got to be so much better than we were if we want to win any games in Kansas City," Smart said after a loss to the Horned Frogs in their regular-season finale. "I know our players are better than they played. I know we're a better team than we've played. It doesn't matter, you've got to go do it."

Asked where Texas deserves to be in the dance, Smart replied: "We'll find out in Kansas City."

Indeed, there is plenty to learn.

Kansas State (24-7) earned the top seed after winning a share of its second Big 12 title under Bruce Weber, and a veteran team led by seniors Barry Brown Jr., Kamau Stokes and Dean Wade will take the floor against the TCU-Oklahoma State winner in the quarterfinals. Despite reaching the tournament championship game in 2010 and 2013, the Wildcats have never hoisted the trophy.

Weber sounded optimistic that Stokes and Wade will be closer to 100 percent after dealing with a series of injuries late in the season. Top backup Cartier Diarra could also be close to returning after he required surgery on his shooting hand midway through the league schedule.

"We're going to push him a little bit this week," Weber said. "I don't want to promise he's going to be in the game in Kansas City but there's a chance and we've just got to see. Doctors are so worried. He wants that thing to be so healed. He can shoot now, he can pass, he can dribble. But when you get in the game and somebody nails you, you don't want to have something happen to him."

The Red Raiders (26-5) will await the Oklahoma-West Virginia winner in the quarterfinals. Like the Wildcats, they have never won the tournament, and they haven't even been to the finals since 2005.

The quarterfinal opener Thursday features fourth-seeded Baylor (19-12) and No. 5 seed Iowa State (20-11), which has made a habit of wreaking havoc in the tournament.

Buoyed by thousands of fans that make the annual pilgrimage south on Interstate 35, the Cyclones have won three of the past five Big 12 Tournaments. That includes back-to-back titles in 2014-15 and another in 2017, when Iowa State entered the weekend as the No. 4 seed.

Never has a lower-seeded team won the Big 12 Tournament.

Plenty of No. 3 seeds have won it, though, including Kansas during the 1999 tournament. And if the Jayhawks can turn the trick again, knocking off three highly regarded opponents in three days, perhaps the disappointment of failing to win the regular-season title will be somewhat assuaged.

If nothing else, it would give them some momentum headed into the NCAA Tournament.