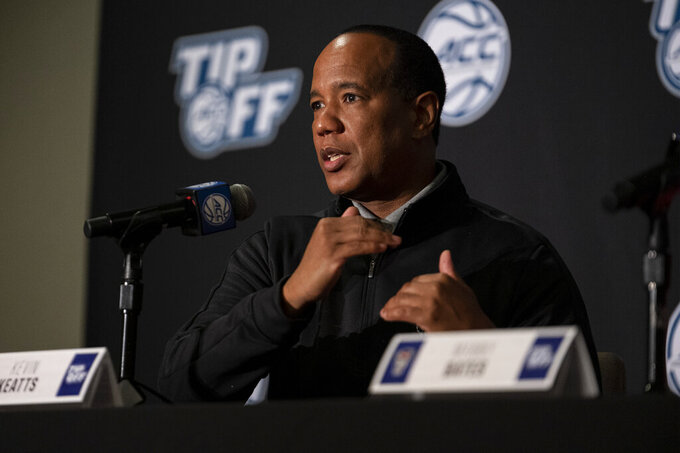 Kevin Keatts has had North Carolina State routinely pushing for 20-win seasons in his first four years, though he has just one NCAA Tournament berth – partly through bad luck – to show for it.

The plan is to make those trips a more consistent outcome, starting with this year’s team that has Keatts excited about its versatility.

“I like the brand that we’re building,” Keatts said. “We’re getting there. We’re putting some pieces on the floor that can be effective every night. I like the direction our program is going in.”

N.C. State made the NCAAs in Keatts’ first year, then fell on the wrong side of the bubble on Selection Sunday despite having 22 wins in 2019. His third team had hit 20 wins again and looked in position to claim a bid entering the Atlantic Coast Conference Tournament before the COVID-19 pandemic shut down the rest of the season.

Last year, N.C. State (14-11, 9-8) had its lowest win total under Keatts while losing leading scorer Devon Daniels to a season-ending knee injury in late January. That team went on to win a game in the NIT.

Keatts’ is counting on that team’s response as a reason for optimism this year. N.C. State won five straight league games after a 4-8 start, and returns multiple players with significant experience – namely full-time starters Jericole Hellems and Manny Bates.

“The thing about this team I think that you guys will like is we've got several guys that can play multiple positions,” Keatts said. “I’m excited about the veterans who are returning. Unfortunately when Devon Daniels went down, we had to shift everything. But it helped some guys grow.”

Some other things to know about the Wolfpack for the 2021-22 season:

Hellems, a 6-foot-7 senior, is the top returning scorer at 12.9 points and can shift between forward and what Keatts prefers to call a “big guard” spot. Then there’s Bates, a 6-11 redshirt junior who has become a defensive force.

Bates averaged 9.8 points and 5.9 rebounds while ranking 11th in Division I with 2.7 blocks per game. Keatts has pushed Bates to expand his shooting range, including the potential to see him take his first career 3-pointers.

“The more he makes, the more opportunities I’ll give him,” Keatts said. “The more we miss, then we’re going to have to have a conversation.

The Wolfpack found help in the transfer portal with 6-3 junior guard Casey Morsell from Virginia and 6-8 forward Greg Gantt from Providence.

Keatts has talked up Morsell’s fit in N.C. State’s scheme with the ability to be contribute in transition and as a defender.

N.C. State had the ACC’s fifth-best recruiting class and No. 25 overall according to 247sports. Power forward Ernest Ross and instate guard Terquavion Smith are four-star prospects, while the Wolfpack added instate point guard Breon Pass — who had an incredible prep career as a two-sport star in football and basketball.

The Wolfpack must replace the team’s top outside shooter with Braxton Beverly transferring to Eastern Kentucky, while the team will need to get better rebounding production, too.

N.C. State opens at home against Bucknell on Nov. 9 and has power-conference matchups against Oklahoma State (Nov. 17) in the Basketball Hall of Fame Showcase in Uncasville, Connecticut, and Nebraska (Dec. 1) in the ACC/Big Ten Challenge.

The ACC opener comes Dec. 4 at home against Louisville, while the Wolfpack’s regular-season finale comes at No. 20 Florida State on March 5.