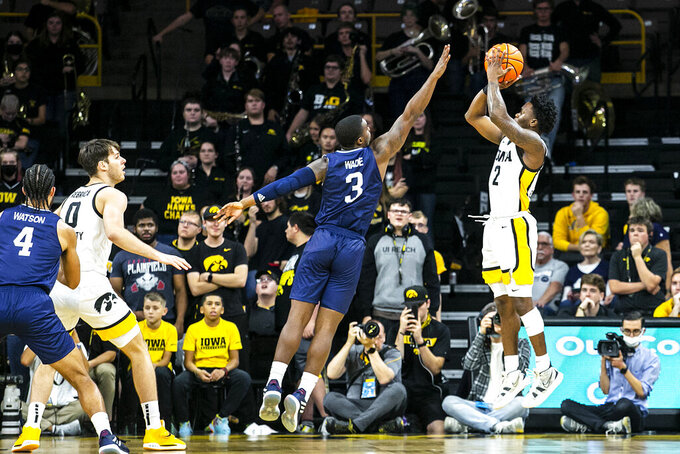 IOWA CITY, Iowa (AP) — Keegan Murray scored 22 of his career-high 24 points in the first half when Iowa broke the game open and went on to beat Longwood 106-73 on Tuesday night to win its 11th straight season opener.

Murray scored eight straight points in the midst of a 23-3 run to start the game. He scored 12 points in a 16-2 streak later in the half for a 33-point lead before the Hawkeyes went into the break ahead 56-29 with Murray already surpassing his career high of 14.

The Hawkeyes are without last season's national player of the year Luke Garza and Joe Wieskamp, both NBA draft picks who combined to average nearly 40 points and 15 rebounds per game. But Murray lived up to high preseason expectations against the Lancers. The 6-foot-8 sophomore, who made the Big Ten all-freshman team last season, shot 8 of 10 and had seven rebounds in only 17 minutes.

Jordan Bohannon, the Hawkeyes' leading returning scorer at 10.6 points per game, finished with 18, making six 3-pointers, his final two from the arc giving the Hawkeyes a 39-point bulge early in the second half. The 24-year-old Bohannon, beginning his sixth season, is four short of the Big Ten career 3-point record of 374 set by Ohio State’s Jon Diebler from 2008-11.