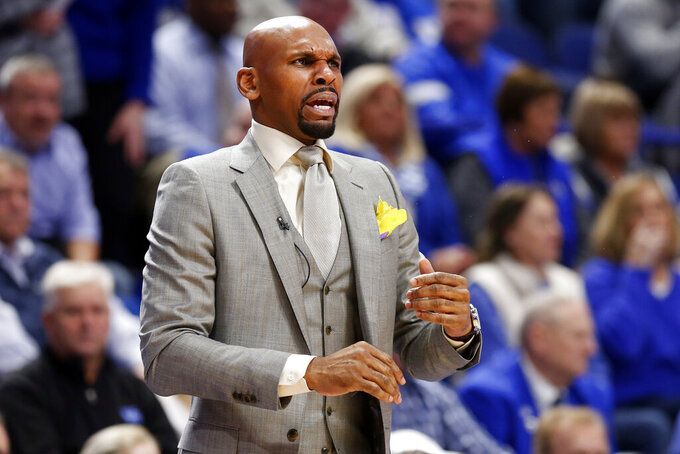 Vanderbilt coach Jerry Stackhouse talks to his team during the first half of an NCAA college basketball game against Kentucky in Lexington, Ky., Wednesday, Jan 29, 2020. (AP Photo/James Crisp) 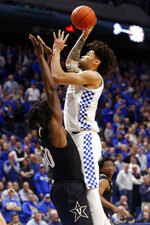 LEXINGTON, Ky. (AP) — Just as Vanderbilt was poised to take control for good, No. 13 Kentucky seized momentum and the game by getting stops and turning them into baskets.

The Wildcats ended up maintaining their roll and handed the Commodores a record they didn't want to discuss.

Tyrese Maxey scored 10 of his 17 points in the second half, and Kentucky used a 23-12 run to rally past Vanderbilt for a 71-62 victory Wednesday night that dealt the Commodores their record 25th consecutive Southeastern Conference regular season loss.

Kentucky's effort followed a subtle reminder from coach John Calipari to take charge better than they did during a nerve-wracking first half featuring breakdowns on both ends.

“Why did you think I didn’t go crazy in the first half and I didn’t in the locker room?" he said. “It’s your team. You want to lose, go ahead. I’m fine. It’s your team. If you play harder and put it on them a little bit and make them make tough plays and get back in it, you will be fine.”

The Wildcats (16-4, 6-1 SEC) trailed 40-30 early in the second half before mounting the big run over 8:45 to lead for good at 53-52 on two Immanuel Quickley free throws with 8:33 remaining. Three-point plays by Ashton Hagans, EJ Montgomery and Quickley helped the surge, and Richards added consecutive baskets for a little more breathing room.

Maxey took over from there, scoring nine of Kentucky's next 10 points, including six consecutive to make it a seven-point cushion.

The Wildcats improved from 39% shooting in the first half to hit 53% in the second and finish 46% overall (26 of 56). They also outrebounded the Commodores 37-29 and finished 11-0 in second-chance points.

Asked what sparked the turnaround, Maxey said, “just our competitive spirit and then Nick, honestly. And just to go out there, be competitive defensively and get multiple stops in a row.”

Richards had 15 points and 11 rebounds despite foul trouble that limited him to just five minutes in the first half. Hagans added 12 points, and Quickley 11 as the Wildcats won their fourth consecutive game and eighth in the last nine.

“Whether I was on the court or not, the guys would've stepped it up,” Richards added. “Everybody would've found their rhythm, everybody would've made shots, we'd have found a way to get back in the game.”

Meanwhile, the Commodores (8-12, 0-7) broke the SEC mark for futility it briefly shared with Sewanee, which dropped 24 in a row from 1938-40 before leaving the conference.

First-year Vanderbilt coach Jerry Stackhouse focused more on what's ahead for his team than the streak and record that hasn't been discussed.

“Two weeks ago we were a different team but adversity set in,” he said. "Two weeks ago, there was a real glaze over everybody’s eyes. Now we're starting to see there are some things we can do.

“Our guys are fighting and learning. They are taking the approach seriously. They will get better.”

Vanderbilt also dropped its seventh in a row to Kentucky and eighth overall.

Saben Lee scored 21 points and Dylan Disu had 13 points with 11 rebounds for the Commodores, who shot 26% in the second half after hitting 52% in the first.

Kentucky paid tribute to Kobe Bryant with blue warmup shirts featuring the player’s Black Mamba logo in white on the front. The back featured Bryant’s numbers 24 and 8 displayed just below the collar. Several players also wore specially designed Nike shoes with his numbers on them.

Vanderbilt: Despite entering on the brink of the record, the Commodores played like they had nothing to lose in the first half. They pushed the pace and made shots from inside and outside the arc. Disu opened the second half with a 3 before they missed their next five, then missed their final eight attempts.

Kentucky: Cold shooting, foul trouble and general sluggishness hurt the Wildcats in the first half and for several moments in the second. That was enough to awaken them to make shots and defensive stops to avoid another home loss to an unranked opponent — one at the bottom of the SEC, yet.

Kentucky visits No. 17 Auburn on Saturday in the first meeting between the schools since losing in overtime to the Tigers last spring in the NCAA Tournament Elite Eight. Auburn visits Lexington on Feb. 29.

Vanderbilt hosts Florida on Saturday in the second of a three-game stretch against upper-division contenders.