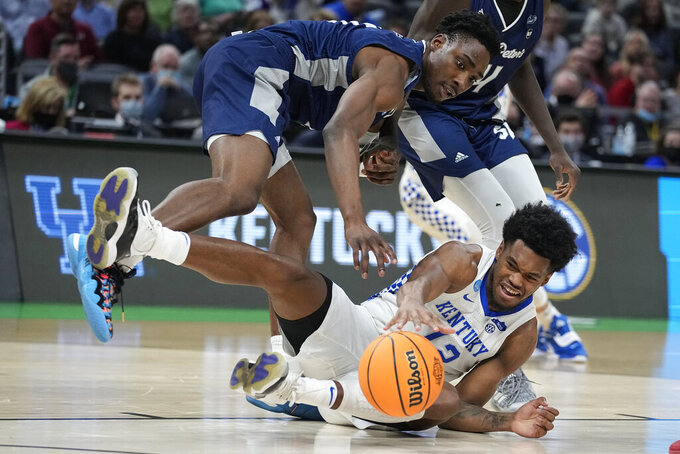 Kentucky forward Keion Brooks Jr. fights for a loose ball with St. Peter's forward KC Ndefo, left, during the first half of a college basketball game in the first round of the NCAA tournament, Thursday, March 17, 2022, in Indianapolis. (AP Photo/Darron Cummings)

LEXINGTON, Ky. (AP) — Kentucky forward Keion Brooks Jr. will enter the NBA draft but does not plan on hiring an agent, leaving open the possibility of returning to school.

Brooks averaged career bests in several categories as a junior, including 10.8 points per contest on 49% shooting. His best performance was 27 points and eight rebounds in Kentucky’s 80-62 rout of Kansas in Lawrence in the Big 12/SEC Challenge in January.

The NBA draft combine is May 16-22, with a June 1 deadline to return to school.

The 6-foot-7 Fort Wayne, Indiana, native said in a statement that he looks forward to the next chapter by entering his name in the draft and chasing his pro dream while maintaining his eligibility.

Kentucky coach John Calipari said Brooks is utilizing the rules in place the way he should and noted his improvement each season.

“His thoughtfulness and maturity not only as a player, but as a man, will allow him to go through this process and make the best decision for his future,” the Calipari said. “He and his family know they have my full support with whatever they decide.”