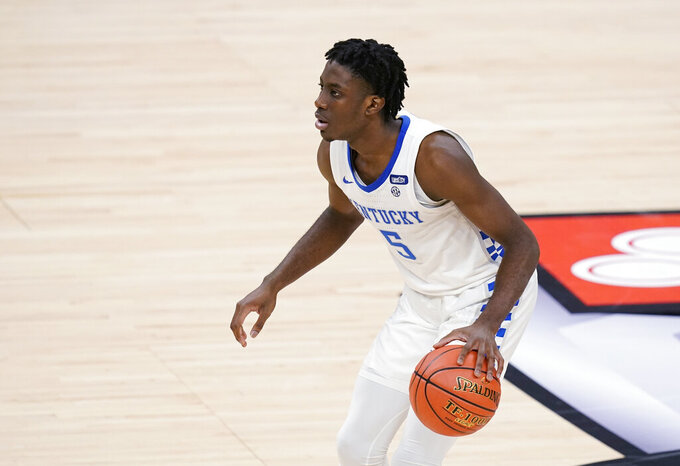 FILE - In this Dec. 1, 2020, file photo, Kentucky's Terrence Clarke brings the ball up during the second half of the team's NCAA college basketball game against Kansas in Indianapolis. Kentucky says freshman guard Clarke died following a car accident in Los Angeles. He was 19. The school announced Clarke’s death in a release Thursday night, April 22, 20221, but did not include any more details. (AP Photo/Darron Cummings, File)

The death of former Kentucky guard Terrence Clarke following a car accident in Los Angeles sparked an outpouring of grief and support from around basketball, including reaction by Los Angeles Lakers superstar LeBron James.

The university announced Clarke’s death from a two-car crash in a release Thursday night. A player-organized candlelight public vigil outside the team dormitory was announced for Friday night, hours after Wildcats coach John Calipari arrived in California to be with Clarke’s family and wrote on his web site that he was “still trying to process what has happened to a kid we all loved.”

Teammates and players the 19-year-old Clarke was preparing to compete with and against in the NBA, including James, also posted condolences on social media.

On CoachCal.com, Calipari recalled how the Boston native remained upbeat through an injury that limited him to just eight games, and his personality’s impact on teammates.

“His heart was overflowing with love for his family, his friends and his teammates,” Calipari wrote. “He was as caring of a person as I have ever coached. His enthusiasm and energy — not just for basketball, for life — are what we all hope to have in our journey.”

“Terrence had figured that part out — that if you wake up every day with a smile on your face and a joy in everything you do, this life is beautiful.”

Kentucky 7-footer Olivier Sarr, who this week followed his teammate into the NBA draft, posted a picture of himself being comforted by Clarke on Instagram. Sarr wrote, “Lil bruh... I love you Forever” with a broken heart emoji and a message in French before ending, “Rest easy.”

On Instagram, James posted a picture of Clarke and wrote, “REST IN PARADISE NEPHEW!!! with several emojis.

Boston Celtics player Jaylen Brown, who mentored Clarke and had him as a guest at multiple games last season, posted several photos of himself with Clarke and asked that his name be called at this summer’s NBA draft. Fellow NBA players such as Atlanta Hawks guard Trae Young and the Indiana Pacers’ Cassius Stanley also expressed their sorrow in posts.

Los Angeles Police Department Sergeant John Matassa, who works in the Valley Traffic Division, told ESPN that Clarke was a solo occupant in a vehicle that ran a red light going “at a very high rate of speed” in the San Fernando Valley area of Los Angeles at approximately 2:10 p.m. PDT.

Matassa said the other driver, who was in a truck, did not claim any injuries. Clarke was driving a 2021 Hyundai Genesis and not wearing his seat belt properly, according to Matassa.

Celtics coach Brad Stevens heard reports about the crash and Clarke’s death shortly after his team beat the Phoenix Suns on Thursday night. Clarke was familiar to the Celtics, their players and even Stevens’ son.

“Not sure how much I want to talk about the game, when you consider he’s a Boston kid ... those kids are important to us here,” Stevens said. “I never met him. My son looks up to him. Hard to talk about a basketball game.”