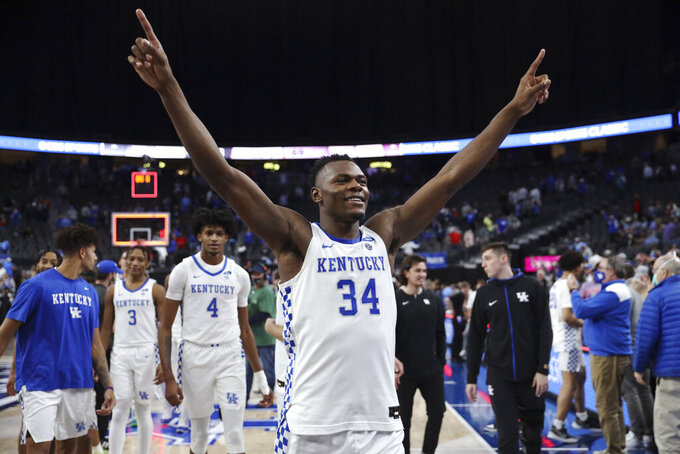 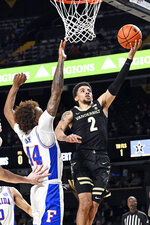 Kentucky forward Oscar Tshiebwe is a unanimous pick as The Associated Press player of the year in the Southeastern Conference.

No. 4 Auburn’s Bruce Pearl is coach of the year and Tigers' freshman forward Jabari Smith is newcomer of the year. The AP All-SEC team was released Tuesday and voted on by 13 journalists covering the league.

Like Tshiebwe, guards JD Notae of Arkansas and Scotty Pippen Jr. of Vanderbilt were unanimous picks as first-team All-SEC. They were joined on the team by Smith and Auburn center Walker Kessler. Tshiebwe received votes at both center and forward and as top newcomer.

The nation’s leading rebounder, Tshiebwe averaged 17.3 points and 15.3 boards per game for the Wildcats. A native of Lubumbashi in the Democratic Republic of the Congo, the 6-foot-9, 255-pounder transferred midway through his second season at West Virginia and sat out the rest of 2020-21.

Once eligible, Tshiebwe helped forge an impressive turnaround for the fifth-ranked Wildcats, who were 9-16 last season. They enter the SEC Tournament with a 25-6 record.

Pearl led the Tigers to the SEC regular season title with a team whose top four scorers and starting point guard are all in their first year with the program. He received a new eight-year deal worth more than $50 million in January.

That group of newcomers includes Smith, the highest rated signee in program history and a likely NBA draft lottery pick who’s also considered a candidate to go No. 1 overall.