Kentucky's Washington in walking boot ahead of NCAA tourney 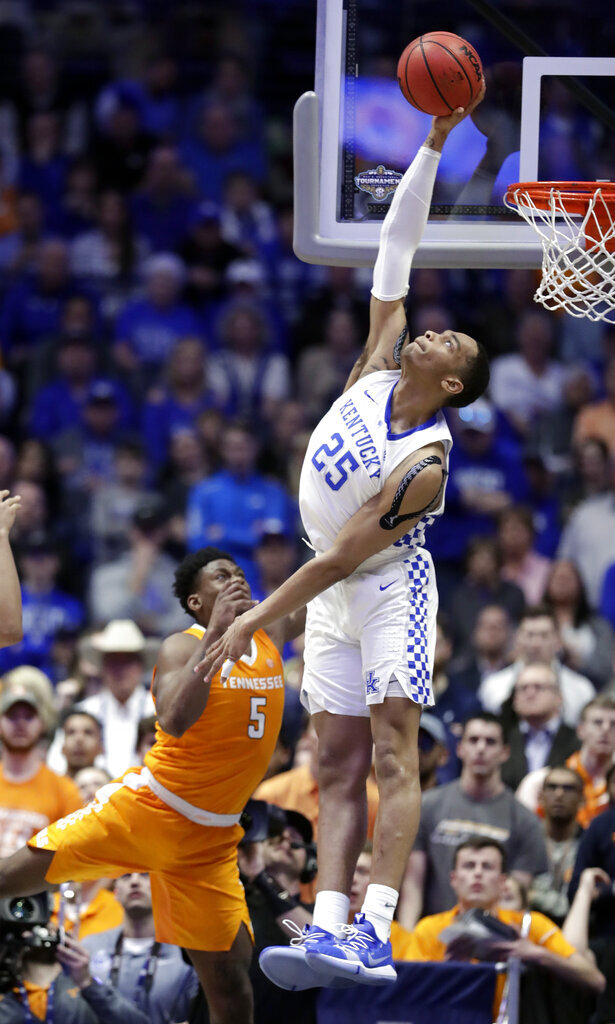 Kentucky forward PJ Washington (25) blocks a shot by Tennessee guard Admiral Schofield (5) but was called for goaltending in the second half of an NCAA college basketball game at the Southeastern Conference tournament Saturday, March 16, 2019, in Nashville, Tenn. Tennessee won 82-78. (AP Photo/Mark Humphrey)

LEXINGTON, Ky. (AP) — Kentucky says scoring and rebounding leader PJ Washington is wearing a walking boot "as a precaution" before the No. 2 seed Wildcats open Midwest Region play in the NCAA Tournament.

Kentucky basketball spokesman Eric Lindsey said in a text Tuesday that Washington has worn the boot since Sunday. He did not specify the injury or which foot the sophomore forward is wearing the boot, but added that an update on Washington's condition will be provided on Wednesday in Jacksonville, Florida, as the Wildcats (27-6) prepare for Thursday's first-round game against No. 15 seed Abilene Christian (27-6).

The 6-foot-8, 228-pound Washington is averaging 14.8 points and 7.5 rebounds per game entering the contest against the Southland Conference champion Wildcats. The All-Southeastern Conference selection by the Associated Press and SEC coaches is under consideration for national honors such as the Naismith and Wooden awards.