Kessler, No. 3 Auburn rebound for 77-64 win over Mississippi 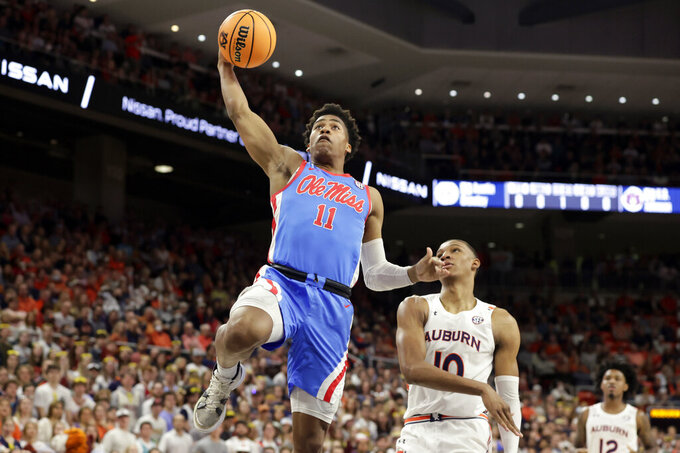 Mississippi guard Matthew Murrell (11) goes up for a lay up as Auburn forward Jabari Smith (10) defends during the first half of an NCAA college basketball game Wednesday, Feb. 23, 2022, in Auburn, Ala. (AP Photo/Butch Dill) 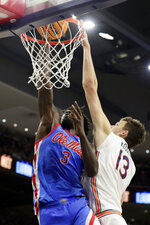 AUBURN, Ala. (AP) — Walker Kessler didn't quite get another triple-double, but Auburn's Wendell Green Jr. and Zep Jasper finally started hitting their own triples.

Kessler had 12 points, 10 rebounds and eight blocked shots while the point guard duo broke out of offensive slumps to lead the third-ranked Tigers to a 77-64 victory Wednesday night over Mississippi.

Jasper followed the advice of coach Bruce Pearl and started looking for shots instead of just setting up teammates. He went 4 of 5 on 3-pointers on his way to a season-high 15 points.

“(Pearl) hit me with a text message like two days ago and told me he thinks I should be more aggressive and be looking for my shot and try to open it up for other guys, because they kind of key on other guys," Jasper said. "They don’t key on me to look to take a shot, so I think that him texting me, that was a key aspect in (Wednesday night’s) game.”

With Kessler falling just shy of his third triple-double, the Tigers (25-3, 13-2 Southeastern Conference) rebounded from a one-point loss at Florida to maintain their one-game lead over No. 6 Kentucky for first place in the league.

Green made three early 3s and scored 14 points. Jasper had totaled three points in his last four games, and Green had shot 6 of 24 over the last three.

“He and Zep both stepped up to the challenge in a big way,” Pearl said.

Jarkell Joiner scored 10 of his 13 points in the second half for the Rebels (13-15, 4-11). Luis Rodriguez added 12 points, and Nysier Brooks had 11 points and seven rebounds before fouling out.

"We got Auburn’s best tonight, but I thought we were right there,” Ole Miss coach Kermit Davis said. “If we make a few timely shots I think it’s a one- or two-possession game late.”

The Rebels played most of the game without Matthew Murrell, who exited with 2:10 left in the first half after taking an elbow to the head. He lay on the court for a while before trainers escorted him to the locker room.

Kessler exited with 1:19 remaining in the game, falling two blocks shy of joining LSU's Shaquille O'Neal as the only SEC players with more than two career triple-doubles.

Not every teammate was aware that he broke the school's record for blocked shots.

“I didn’t know he did that,” Green said. “That’s crazy. That’s a great accomplishment."

The Rebels scored the first nine points of the second half to erase most of a 12-point deficit. Auburn then went on an 18-6 tear and didn't look back.

The Tigers were coming off a 63-62 loss at Florida when Green's pass attempt to Kessler was knocked away, allowing the clock to run out. That dropped the formerly top-ranked team only one spot in the Top 25.

“We hit shots that we know we can make,” Green said. "We’ve been working all week. We’ve been kind of in a slump lately, but once we hit shots, that’s just what our offense looks like.”

Ole Miss: Struggled at times in Murrell's absence after managing to beat Georgia short-handed. Murrell and Joiner both missed that game with the flu.

Auburn: Produced a comfortable win even without sparkplug K.D. Johnson providing much scoring. He had two points and missed all six shots from the field.