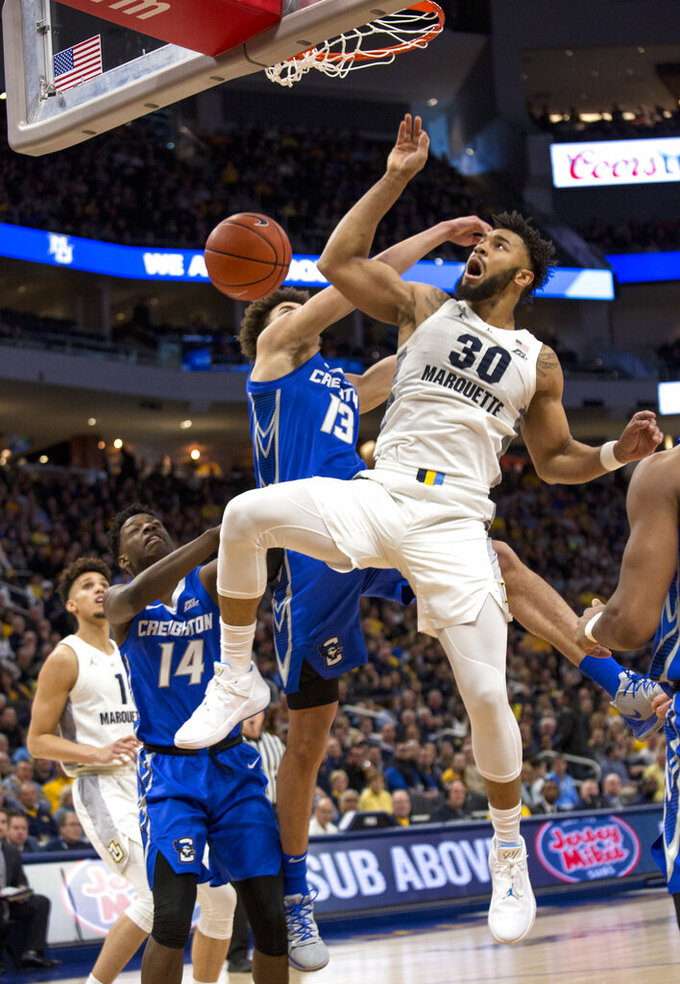 Marquette forward Ed Morrow, center, gets a slam dunk against Creighton during the first half of an NCAA college basketball game Sunday, March 3, 2019, in Milwaukee. (AP Photo/Darren Hauck) 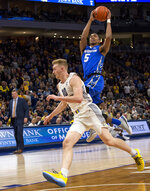 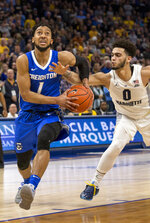 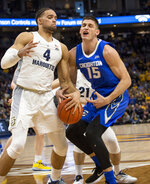 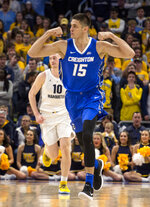 The Bluejays (16-13, 7-9 Big East) outscored Marquette 16-3 down the stretch until a 3-pointer in the closing seconds by Howard, who finished with 33 points.

"We've just got to have a better focus going into games," Howard said. "I thought we didn't really have any energy or life from the beginning of the game to the end. So, that's something we can't have. We have to have that spirit, that life, throughout the game. I think we lacked that today."

Howard, the Big East's leading scorer, had 21 consecutive points for the Golden Eagles (23-6, 12-4) over an 11-minute span of the first half, but also committed six turnovers.

Howard's 3-pointer from the left side put Marquette up 54-50, but the Golden Eagles turned it over on their next four possessions. Ty-Shon Alexander turned a steal into a short jumper to put Creighton up 56-54 with 3:20 left.

The Bluejays, who scored 18 points off turnovers, preserved the victory with six free throws in the final minute.

"It goes without saying that I'm really proud of our basketball team," Creighton coach Greg McDermott said. "We took a very high-powered offense in Marquette and really executed our defensive game plan almost to perfection. We were late on a couple ball screens on Howard in the first half and he made us pay."

Creighton had lost six straight to Marquette, including a 106-104 overtime loss at home in January.

It was the second consecutive sloppy defeat for Marquette, which committed 18 turnovers in a 67-61 loss at Villanova on Wednesday. It also was only the second home loss for Marquette in 18 games at the new Fiserv Forum.

Marquette, which trailed by as many as eight in the first half, rallied for a 33-29 lead at the break as Creighton did not have field goal over the final 4:04.

Howard gave the Golden Eagles their first lead at 30-29 on a 3-pointer.

Marquette played from behind most of the first half after five turnovers in its first six possessions.

"Live ball turnovers when you can't set your defense against a powerful offensive team like Creighton are deadly," Wojciechowski said. "If you had told me this morning that we would have held Creighton to 66 points, I thought we would have had a great chance to win. Self-inflicted wounds."

Creighton: The Bluejays have won three straight after losing their previous four. They close the regular season with two home games this week. Creighton is 9-6 at home.

Marquette: The Golden Eagles still have a shot at the Big East title and the No. 1 seed in the conference tournament. Marquette is tied with Villanova, and the teams have locked up the top two spots in the conference.

Howard became Marquette's all-time season-season scoring leader, pushing his total to 740 points. He passed both Andrew Rowsey, who had 717 last season, and Dwyane Wade, who had 710 in 2002-03.

"This is a program of incredible significance," Wojciechowski said. "And to do that as a 20-year-old junior, and there's more games to be played, is pretty incredible, when you think about the names and the people that have played here."

Marquette is at Seton Hall on Wednesday.