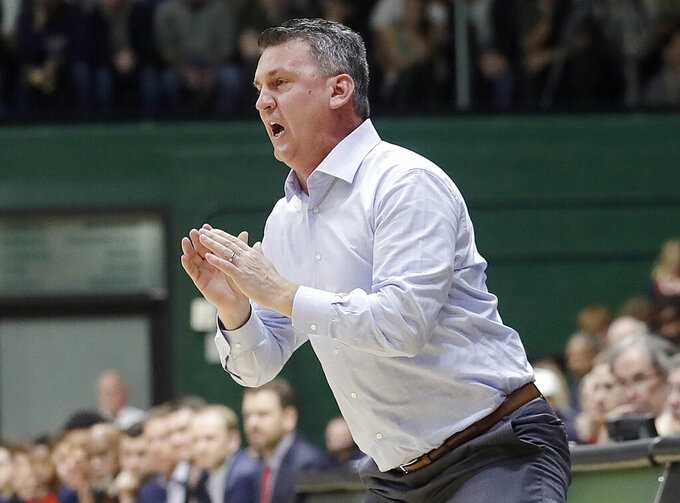 Smith was given a six-year contract worth $1.4 million annually after a successful tenure at the University of San Francisco and will be formally introduced at a news conference on Monday.

"We set a goal of finding the best head coach for Washington State University," athletic director Pat Chun said in a statement. "Kyle Smith fulfilled all of our criteria in meeting this goal. Coach Smith has a proven record of success, a commitment to academic excellence and a passion for developing every aspect of his student-athletes. The methodology he has created in building basketball programs for sustainable excellence is like none other in the sport. We are fortunate to have Kyle leading our program."

The 49-year-old Smith comes to Washington State after a successful three-year run as the head coach at San Francisco. Smith also was a head coach at Columbia for six seasons and has strong West Coast ties with his time as an assistant at Saint Mary's for nearly a decade. Smith is the first WCC coach to leave for another head coaching since Jan Van Breda Kolff went from Pepperdine to St. Bonaventure in 2001.

Smith went 63-40 at San Francisco. He was the first coach in USF history to win at least 20 games in each of his first three seasons and led the school to three straight 20-win seasons for the first time in 37 years.

Smith's hiring may not come with much sizzle but he could be the perfect coach to turn around a Cougars program that slumped to the bottom of the Pac-12 during Kent's time in Pullman. Kent was 58-98 in his five seasons in charge and 22-68 in Pac-12 play. Washington State lost its final six games to close this season as apathy seemed to overtake the program. The Cougars never finished higher than a tie for eighth in Pac-12 play and each of the past two years finished the regular season in 11th place.

"When I think of Washington State basketball, I think of the great coaches that have been there, going back to Marv Harshman, George Raveling, Kelvin Sampson and then Tony Bennett, to name a few," Smith said in a statement. "The most recent success being Tony Bennett, who actually offered me a job when his dad left and he was appointed head coach. I've followed Tony's career and he and I have often recruited some of the same types of players. He's obviously done great things and he's always been kind of a mentor of mine. I just hope I can honor the tradition of those coaches that came before me."

That's the situation Smith will inherit in landing his first major conference head coaching job. But Washington State may be the perfect spot for Smith to bring his analytics-based system.

"Every program he's been at he's turned around. ... I think he'd be a great get," Thompson said.

The most successful coaches at Washington State have all had specific systems and found players that fit. Tony Bennett was the latest example, taking the Cougars to consecutive NCAA Tournament appearances a decade ago before leaving for the job at Virginia.

Smith is well-respected in the industry and Richmond coach Chris Mooney has called him "the smartest man in college basketball."

Before landing the job at San Francisco, Smith went 102-81 in six seasons at Columbia, capping his run in New York by leading the Lions to the CIT title in 2016.

The Dons took little time to fill the void, promoting associate coach Todd Golden into the role. Golden will receive a five-year contract. Golden started his coaching career at Columbia in 2013-14 before working for two years at Auburn. He has spent the past three seasons at USF. Golden also played in the West Coast Conference for Saint Mary's.