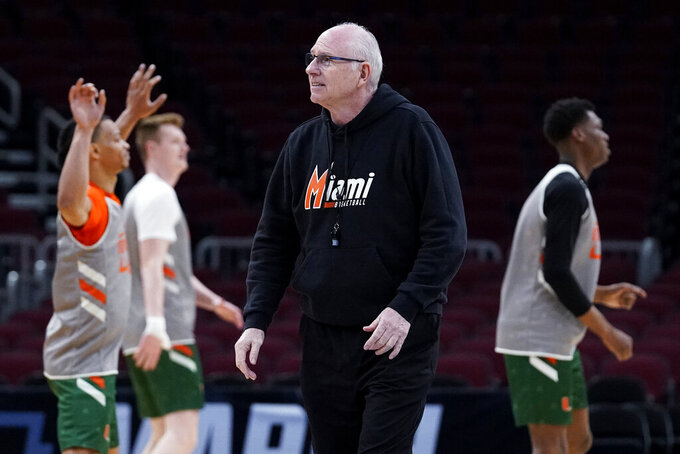 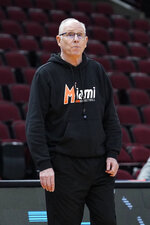 They've heard it over and over. And if they're sick of it, well, he doesn't necessarily blame them.

“Sadly to say they're tired of hearing about George Mason and have told me, ‘Hey, let’s do what they did so you can talk about us in the future rather than them,’” Larrañaga said.

The Hurricanes (25-10) are scripting a story of their own, with a spot in the Sweet 16 after three straight losing seasons. Seeded 10th in the Midwest Region, they are set to face 11th-seeded Iowa State (22-12) on Friday in a matchup between teams that made huge turnarounds this season.

It's the first Sweet 16 for Miami since 2016 and the third in 11 years under Larrañaga. A win over the Cyclones in the Windy City would send the Hurricanes to their first regional final.

Larrañaga, of course, has been there before. He coached George Mason when it rose from the bubble to the Final Four in 2006.

The Patriots lost in the Colonial Athletic Association Tournament semifinals that year but were given an at-large bid and an 11 seed — all they needed to go on a run that transfixed the nation.

“I'm a storyteller,” Larrañaga said. “I tell stories every single day in practice, in pregame, at halftime, what have you. I've always done that. That's what my high school coach did. That's what I'm doing. George Mason is a good story to share with them about being underrated, underappreciated and even basically told, ‘You’re not even gonna make the Dance.' But these guys, they've also created a lot of stories.”

“As a young coach and you look at some of the highly successful coaches in college basketball who have done it over time, he stands out,” Iowa State coach T.J. Otzelberger said. “But that run that they had with George Mason, certainly for all of us, that’s one of the things about March Madness that makes it so special, is a team like George Mason having that run. So that moment and that time certainly stands out.”

Miami was hurt in recent years by an FBI investigation into corruption in college basketball that raised questions about Larrañaga's program, though no wrongdoing by him surfaced.

Recruiting struggles and injuries didn't help. And after going 10-17 last season, Larrañaga wasn't exactly bursting with confidence that the Hurricanes would turn things around. But with three starters back and some talented transfers like point guard Charlie Moore — a Chicago product who started games for California, Kansas and DePaul — he saw potential.

With their swarming traps all over the court and a breakneck offense, Miami has created all kinds of havoc. The Hurricanes led the Atlantic Coast Conference in steals.

Miami bounced back from a loss to Duke in the ACC Tournament by squeezing past USC and swarming Auburn, a team that had championship hopes, 79-61 on Sunday.

Now they will face another team that has made a huge improvement. Iowa State's jump from two wins a year ago to 22 in Otzelberger's first season is one of the biggest in NCAA history.

If Miami wins, well, don't be surprised if Larrañaga busts out some dance moves in the locker room. It's just what he does, part of his bond with players.

“The first game that Coach came to that he was recruiting me, he walked into the gym, a big smile, waved at me, and you could just tell this coach is special,” forward Sam Waardenburg said. “The first time I got on campus, you could really tell he stood for family values in the program. He was a family man. Every year since then, it's always been positivity that's the emphasis of the program. You just love him for it.”