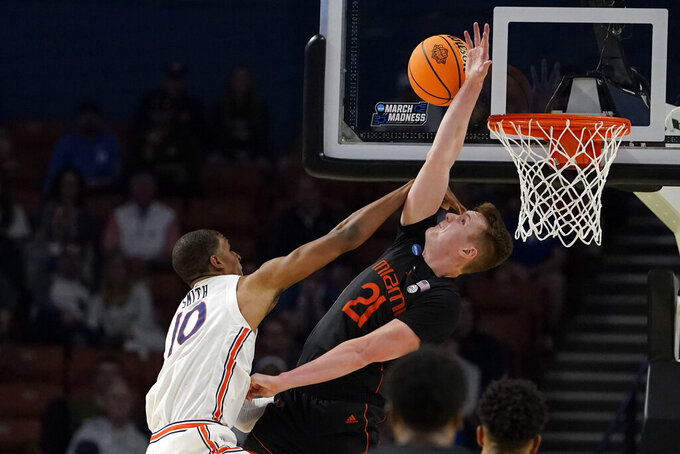 Miami's Sam Waardenburg (21) blocks Auburn's Jabari Smith (10) during the second half of a college basketball game in the second round of the NCAA tournament Sunday, March 20, 2022, in Greenville, S.C. (AP Photo/Brynn Anderson)

CORAL GABLES, Fla. (AP) — To fully understand how long Miami coach Jim Larrañaga has been teaching the scramble defense, consider that the first instructional video he did about the scheme came out three decades ago.

It was on VHS.

Apparently, some analog ideas still can work in this digital world. The scramble — it’s best defined as a series of swarming traps — is one of the big reasons why the Hurricanes are in the Sweet 16 for the first time since 2016. The No. 10 seeds in the Midwest Region will take on 11th-seeded Iowa State on Friday night for a spot in the Elite Eight.

“We’ve implemented the scramble almost every season I’ve been a coach,” Larrañaga said. “The difference is I’ve had some teams that just couldn’t do it. They’re too slow, they’re too big, they didn’t rotate fast enough, so we didn’t implement it.”

This time, it was out of necessity.

This is where the scramble saves the day. Of those 16 teams that are still playing, none has a better turnover margin than the Hurricanes — who force 4.6 more per game than they commit.

“The best thing you can do when you can’t rebound is don’t give them a shot,” Larrañaga said. “Turn them over first.”

Simple thinking, but it works.

And it makes sense that an old defense seems to be the winning elixir for a white-haired coach and a roster that has a half-dozen players who are 23 or older. Barring a big change of plans, the youngest player in Miami’s starting lineup on Friday night in Chicago — yes, it’ll be Hurricanes vs. Cyclones in the Windy City, the greatest meteorological matchup in NCAA Tournament history — will be 21-year-old Isaiah Wong.

“My best player is 18, and they have four players that are 24,” Auburn coach Bruce Pearl lamented after the second-seeded Tigers — who had been considered a national championship contender all season long — lost 79-61 to Miami in the second round on Sunday. “That experience showed. It really did.”

The defense was the difference. The Hurricanes held Auburn 18 points below its scoring average. The scramble showed up everywhere: in the backcourt, or 30 feet from the basket, or even in the post.

“They’re just very physical in every catch,” said Auburn’s Jabari Smith, a certain lottery pick and probable top-five selection if he declares for the NBA draft as expected. “They sent somebody any time I tried to attack or make a move. They just kept bodies on me. They switched every ball screen.”

The Hurricanes do that a lot.

There are five players left in the NCAA Tournament with more than 60 steals this season — and Miami has three of them. Charlie Moore has 72, while Kameron McGusty and Jordan Miller each have 62. (The other two players on that list are Arkansas’ JD Notae with 77 and Iowa State’s Tyrese Hunter with 68.)

“That’s what we’ve been doing all season as a team,” McGusty said. “We know that’s our identity. Our rotations are on point. As a group, we’re all one. We did a good job of trapping them, rotating, not letting them get comfortable. Like I said, that’s just our identity. That’s what we do.”

That’s why on Monday, the Hurricanes were scrambling to make plans for a trip to Chicago this weekend. And without that scheme, it wouldn’t have happened.

“These guys picked it up,” Larrañaga said. “Not super quick. It took us a while. Sometime in December we started to realize, ‘Oh, we’re getting good at it.’ We need to do it more. Because initially we were only doing it about 10% of the time. When we started to have a little more success, we did it 20% of the time. Now we’re doing it all the time.”