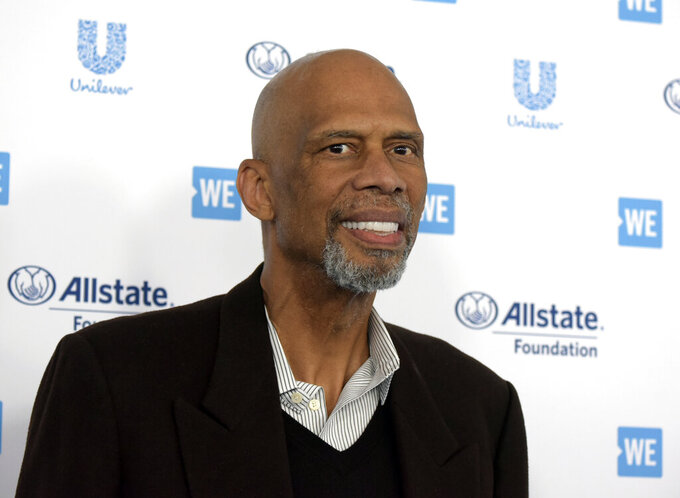 FILE - Kareem Abdul-Jabbar arrives at WE Day California at The Forum on Thursday, April 25, 2019, in Inglewood, Calif. Kareem Abdul-Jabbar has revealed that he received the COVID-19 vaccine and is encouraging others to consider doing the same. The Basketball Hall of Famer and NBA’s leading all-time scorer has taped a short message that will be aired beginning Monday during broadcasts of games played on the Martin Luther King Jr. Day holiday. (Photo by Richard Shotwell/Invision/AP)

The Oklahoma City Thunder's scheduled home game Sunday night against the Philadelphia 76ers has been postponed.

Because of ongoing contact tracing within the 76ers, the NBA said the team does not have the league-required eight available players to proceed with the game.

No. 4 Texas' scheduled basketball game at Iowa State on Wednesday night has been postponed.

The Big 12 Conference said it will work with the schools to reschedule the game.

The Atlantic Coast Conference says Wednesday’s men’s basketball game between North Carolina State and No. 18 Virginia has been postponed.

The league announced the postponement Sunday due to a positive COVID-19 test, quarantining and contact tracing within the Wolfpack program.

N.C. State announced a cluster of cases associated with Wolfpack athletics on Wednesday, though it didn’t specify which programs were involved. State health officials define a cluster as five or more cases deemed in close proximity or location.

A day later, the ACC announced that the Wolfpack's home men’s basketball game Saturday against Georgia Tech would be postponed.

The Green Bay Packers are making 6,500 tickets available to season-ticket holders for the NFC championship game.

This represents the same number of tickets they sold to their NFC divisional playoff victory over the Los Angeles Rams on Saturday. That marked the first home game this season that the Packers played in front of any paying spectators.

The Packers hadn’t allowed any spectators for their first four regular-season home games. In late November, they made seating available to team employees and their immediate family members to test out Lambeau Field safety protocols in case paying spectators were allowed later in the season. The last two regular-season home games also featured hundreds of frontline workers who were invited to attend.

Nebraska men’s basketball program will pause for at least seven more days after coach Fred Hoiberg and 11 other staffers or players tested positive for COVID-19.

The Cornhuskers’ home game against Minnesota on Wednesday and game at Iowa next Sunday have been postponed. The schools will work with the Big Ten Conference to reschedule.

Hoiberg said he tested positive for the coronavirus on Friday and began self-isolating.

“I am experiencing symptoms, but my condition has improved over the last 24 hours,” Hoiberg said. “Our program has been hit hard over the last 10 days, and we are all trying to manage it and get through it.”

Nebraska already has had games against Illinois and Maryland canceled because of COVID-19 issues.

Hoiberg has an underlying health condition. He was born with an abnormal aortic heart valve and had to retire from pro basketball because of it in 2005.

Kareem Abdul-Jabbar has revealed that he received the COVID-19 vaccine and is encouraging others to consider doing the same.

The Basketball Hall of Famer and NBA’s leading all-time scorer has taped a short message that will be aired beginning Monday during broadcasts of games played on the Martin Luther King Jr. Day holiday. The video shows Abdul-Jabbar receiving a vaccine.

“We have to find new ways to keep each other safe,” he said.

Abdul-Jabbar is 73, within the guidance from the Centers for Disease Control and Prevention about vaccine eligibility.

Those guidelines suggest that priority for receiving the vaccine should go to health care personnel, those living in long-term care facilities, front-line essential workers, those over the age of 65 and people “with underlying medical conditions” that increase their vulnerability to COVID-19.

NBA Commissioner Adam Silver has said the league will ensure that its players and teams wait until their turn comes to be vaccinated and will not “jump the line.”

The Los Angeles Clippers announced late last week that the LA Forum will serve as a large-scale vaccination site starting Tuesday, and Detroit forward Blake Griffin is part of a commission in Michigan trying to stress the safety and effectiveness of the vaccine.