The Latest: Buckeyes get Rose Bowl trip vs Washington 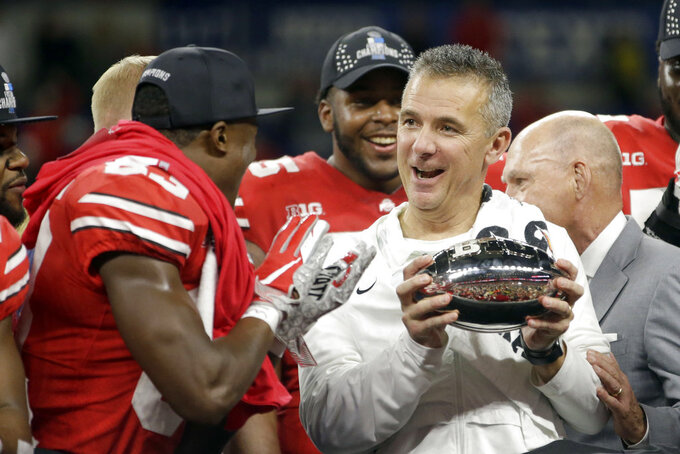 Ohio State's consolation prize for missing out on the College Football Playoff is a classic matchup in the Granddaddy of Them All.

Ohio State finished sixth in the race for four playoff spots after winning the Big Ten title for the third time in five years, trouncing Northwestern 45-24 on Saturday night.

A blowout loss to Purdue in October doomed the Buckeyes, but their second trip to Pasadena in 22 years is a pretty decent finish to an eventful season under coach Urban Meyer.

The Huskies (10-3) are in the Rose Bowl for the first time in 18 years after overcoming a disappointing start to the season with four straight wins in November, including a Pac-12 title game victory over Utah on Friday.

A year ago, he spearheaded UCF's "national title" push after the Knights finished an unbeaten season and were left out of the four-team playoff.

It's deja vu all over again for White and the Knights.

Despite a 12-0 record and a 56-41 win over Memphis in Saturday's American Athletic Conference title game, UCF was on the outside looking in as Alabama, Clemson, Notre Dame and Oklahoma advanced to the playoff.

White tweeted that the CFP is "not a playoff. It's an invitational."

Alabama quarterback Tua Tagovailoa will have surgery on his right ankle and recovery is expected to take about two weeks.

Crimson Tide coach Nick Saban tells ESPN that Tagovailoa has a high ankle sprain and will have it scoped. He says recovery time for most of his players for this procedure has typically been "a two-week deal."

Saban is hoping Tagovailoa will be back by the time No. 1 Alabama starts practice for the Orange Bowl semifinal game against No. 4 Oklahoma on Dec. 29.

Tagovailoa hurt his right ankle when an offensive lineman stepped on it in the fourth quarter of the Southeastern Conference championship game against No. 6 Georgia. The Heisman Trophy candidate was helped off the field and didn't return to the game.

Clemson is making its fourth College Football Playoff appearance with a new bowl experience against a first-timer in the four-team playoff.

Clemson has never played in the Cotton Bowl, or at the home stadium of the NFL's Dallas Cowboys. The stadium hosted the first national championship game in the CFP era four years ago and a semifinal game three years ago when Alabama beat Michigan State, 38-0.

Notre Dame last played in the Cotton Bowl on New Year's Day 1994, beating Texas A&M when the game was still in its namesake stadium about 20 miles away in Dallas at the site of the State Fair of Texas. The Irish are 5-2 in Cotton Bowl games.

The Fighting Irish have played at AT&T Stadium once, beating Arizona State 37-34 in October 2013.

This will be only the fourth meeting between Clemson and Notre Dame, the first in a bowl game. The Irish won the first meeting in 1977, while the Tigers won matchups in 1979 and 2015.

Alabama and Oklahoma are headed to the Orange Bowl, and a semifinal showdown in the College Football Playoff.

The Crimson Tide (13-0) have been the nation's No. 1 team all season and defeated Georgia on Saturday to win the Southeastern Conference title. The Sooners (12-1) defeated Texas to win the Big 12 title on Saturday.

This is the second time that the Orange Bowl has been the site of a CFP semifinal. Top-seeded Clemson beat fourth-seeded Oklahoma 37-17 in 2015.

The other CFP semifinal this season is at the Cotton Bowl, where second-seeded Clemson will face third-seeded Notre Dame in a battle of unbeatens.

Time to set the field for college football's final four.

Alabama, Clemson and Notre Dame are unbeaten locks. Oklahoma is hoping its Big 12 title victory can move the Sooners into the fourth and final spot in the College Football Playoff when the rankings are released on Sunday.

The semifinals will be played Dec. 29 in the Cotton Bowl and Orange Bowl. The national championship game is Jan. 7 in Santa Clara, California.

Oklahoma was fifth last week, between No. 4 Georgia and No. 6 Ohio State. After the Sooners beat Texas on Saturday to avenge their only loss, the Bulldogs lost a dramatic Southeastern Conference title game to Alabama and the Buckeyes beat Northwestern for the Big Ten title.

Georgia has two losses and no team has made the playoff yet with more than one.