The Latest: Bucknell men's and women's hoops back on court 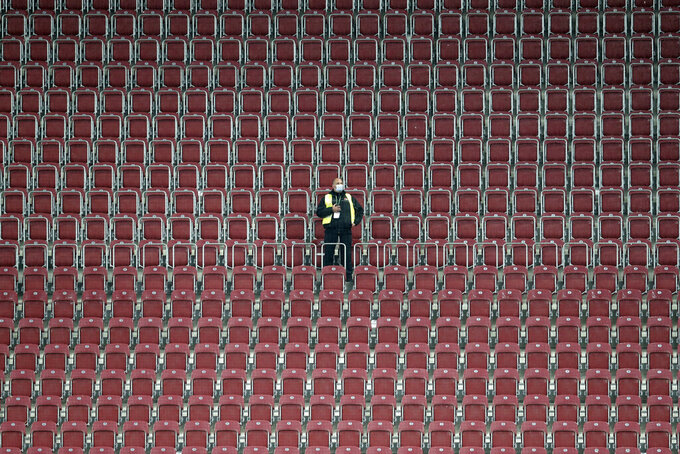 FILE - In this June 17 2020 file photo, a security wearing a face mask to prevent the spread of the new coronavirus stands on the empty tribune of the WWK Arena during the German Bundesliga soccer match FC Augsburg against TSG 1899 Hoffenheim in Augsburg, Germany, Wednesday. More than 50,000 people have died after contracting COVID-19 in Germany, a number that has risen swiftly over recent weeks as the country has struggled to bring down infection figures. (AP Photo/Michael Probst, File)

COVID-19 tests within the Bucknell men’s and women’s basketball Tier 1 group that were announced as positive on Saturday have been amended to a negative result by the laboratory that conducted the testing.

The school said Monday that two test results were incorrectly recorded as positive by Genetworx, and quality control processes in place at the company caught the error. The two tests in question were re-run and both samples were confirmed negative. The two students were to be retested Monday as an extra precaution.

Athletes, coaches and other Tier 1 personnel from both teams have been released from quarantine and will return to practice and their regular COVID-19 testing. That means this weekend’s games against Lehigh, which were previously announced as postponed, will be played as scheduled.

The Bucknell men and women had been scheduled to play two games each against Colgate this past weekend. Makeups for those postponements will be announced at a later date.

The American Athletic Conference announced Monday that Temple and East Carolina will play a home-and-away series with the Owls first hosting the Pirates on Thursday, Feb. 11 before traveling to North Carolina two days later.

Temple was originally scheduled to play at East Carolina on Jan. 16, but the game was postponed due to COVID-19 issues with members of the ECU program.

The next two George Washington men’s basketball games have been postponed due to the continued pause on basketball activities after positive tests within Tier 1 personnel.

In accordance with guidelines, policy and protocols, Tier 1 personnel at the school are undergoing additional testing before practice and competition can be resumed.

George Washington was supposed to play at George Mason on Wednesday and against Fordham on Saturday.

Tennis Canada has canceled its Fischer Indoor Junior National tournaments due to concerns over the COVID-19 pandemic.

The tournaments affected are the under-12 and U14 events in Montreal and the U16 and U18 events in Toronto. All four tournaments were scheduled to begin in March.

Tennis Canada said government health and travel restrictions related to the pandemic, as well as wanting to ensure the safety of those involved, were factors in the decision.

Canada’s tennis governing body added that although it's not organizing any events for the first quarter of 2021, plans currently remain in place for the rest of the year.

The Eagles were set to play Clemson on Wednesday and No. 25 Louisville on Saturday.

Instead, the ACC announced that Louisville will now play at Clemson on Wednesday night.

The conference also rescheduled Georgia Tech’s game at Louisville for Feb. 1. The teams were initially set to play on Jan. 9, but COVID-19 protocols led to the Yellow Jackets postponing four straight games.

With the revamped schedule, Georgia Tech will now play three games in a seven-day period, beginning with Tuesday’s game at Duke followed by a home game against No. 16 Florida State on Saturday.

Thursday night’s women’s basketball game between Maryland and Rutgers has been postponed “as mutually agreed upon out of an abundance of caution surrounding the health and safety of the participants.”

The postponement was announced in a press release issued by Maryland. There was no explanation regarding COVID-19 issues of either team.

Maryland and Rutgers will work out a makeup date in coordination with the Big Ten.

The Atlanta Hawks will allow a small number of fans for the first time this season when they host the Los Angeles Clippers on Tuesday night.

The team is permitting 8% capacity at State Farm Arena, which means a socially distanced crowd of about 1,300 in an arena that seats nearly 17,000.

The Hawks had initially hoped to have fans for the first time at their annual Martin Luther King Jr. Day game last week, but a surge in COVID-19 cases prompted a delay.

Face coverings will be required at all times in the arena, which will have contactless entry, screening and transactions, as well as touchless hand sanitizer stations and restroom fixtures. Plexiglass dividers have been installed in concessions areas and some seating areas. Additional cleaning and disinfecting procedures also will be in place.

Thursday night’s women’s basketball game between Maryland and Rutgers has been postponed “as mutually agreed upon out of an abundance of caution surrounding the health and safety of the participants.”

The postponement was announced in a press release issued by Maryland. There was no explanation regarding COVID-19 issues of either team.

Maryland and Rutgers will work out a makeup date in coordination with the Big Ten.

The National Hockey League has postponed the Tampa Bay at Carolina game scheduled for Tuesday because of coronavirus concerns with the Hurricanes.

It’s the fourth consecutive Carolina game that has been postponed, and the Lightning’s game in Raleigh on Thursday could also be in danger. Tuesday’s game has been moved to Feb. 22 as part of several changes to the schedule.

The team had six players on the NHL’s COVID-19 unavailable list when it was last released Sunday.

Carolina, Dallas, Florida, Nashville and Tampa Bay have all had games postponed because of the pandemic. Those teams all play in the realigned Central Division.

Texas coach Shaka Smart announced Monday he has tested positive for COVID-19 and is isolation.

“I am working remotely and and look forward to joining our team in person when it is safe to do so,” Smart said in a statement released by the school.

The No. 5 Longhorns haven’t played in more than a week after two games were postponed because of novel coronavirus problems at Iowa State and TCU.

Texas is scheduled to host No. 24 Oklahoma on Tuesday. The school did not immediately announce who would coach in that game.

Texas was missing three players in its most previous game, a win over Kansas State, including freshman starter Greg Brown, although a reason for their absences was not announced.

The Cactus League has asked Major League Baseball to delay the start of spring training due to coronavirus concerns just over three weeks before pitchers and catchers are supposed to report.

The Cactus League made the request in a letter to Baseball Commissioner Rob Manfred obtained by The Associated Press on Monday. The letter was co-signed by Arizona community leaders, including the mayors of Mesa, Scottsdale, Surprise, Glendale, Peoria, Goodyear and Peoria, as well as representatives from Phoenix and the Salt River Pima-Maricopa Indian Community.

Arizona is averaging just over 7,000 new coronavirus cases per day, but the Cactus League cited data in its letter from the University of Washington’s Institute of Health Metrics and Evaluation projecting a sharp decline in infections in Arizona by mid-March, down to as few as 3,072 daily.

Despite the roiling case numbers, the NHL’s Arizona Coyotes are hosting 3,450 fans for home games in Glendale, and the NBA’s Phoenix Suns are playing without fans. High school sports are also still operating.

Any changes to the major league schedule are subject to agreement with the players’ association.

The Chattanooga Mocs have postponed a pair of men’s basketball games after a positive COVID-19 test among the team’s Tier 1 personnel.

This is Chattanooga’s first schedule change since the start of the season. The Mocs’ season opener was changed from Bellarmine to Lander with their second game postponed a couple weeks due to issues with both of the Kentucky-based programs.

The Southern Conference postponed three games because of positive COVID-19 tests within the Furman and Chattanooga men’s basketball programs.

Furman’s next scheduled game is Feb. 3 at Samford, while Chattanooga is slated to return to the court at Western Carolina the same day. ___

Minnesota’s premier sled dog race will take place beginning next week, but this year spectators will not be part of the event.

The John Beargrease Sled Dog Marathon traditionally attracts thousands of spectators at the start of the race in Duluth, at checkpoints, and at the finish in Grand Portage. But, because of the novel coronavirus pandemic, spectators have been told to stay home and watch the race online.

Race officials, mushers, handlers and the hundreds of volunteers will be required to wear a face covering.

It’s a big field this year with more than 70 mushers registered between three races, WDIO-TV reports.

The race has been held every January since 1980. At about 400 miles, the event is billed as the longest sled dog race in the lower 48 states and is a qualifier for the Iditarod in Alaska.

There were eight positive tests out of 2,518 English Premier League players and club staff who were tested twice last week.

The results follow 16 cases announced last Monday, and 36 the Monday before that.

All eight positives last week were recorded in the first round of testing from Monday, Jan. 18 to Thursday, Jan. 21. There were no positive tests from Friday, Jan. 22 to Sunday, Jan. 24.

All of the individuals who tested positive have to self-isolate for 10 days.

The Belgian soccer federation says amateur competitions should be suspended amid the coronavirus pandemic.

Professional soccer and the Belgian Cup competition will be able to continue with no fans at stadiums. The amateur teams in the Belgian Cup will be granted a special permission to play.

The federation says only kids under 12 will be allowed to continue playing.

The federation says the financial consequences of the pandemic have been “huge” and that it has already spent 8 million euros ($9.55 million) in aid to clubs.

Belgium has been hit hard by the pandemic. The country of 11.5 million inhabitants has reported more than 20,000 deaths linked to the coronavirus.