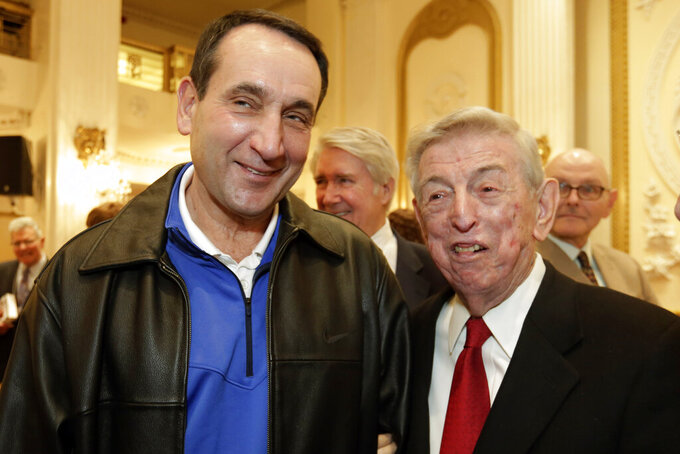 FILE - In this Nov. 20, 2015, file photo, Duke basketball coach Mike Krzyzewski, left, winner of the Lapchick Character Award, gets together with former St. John's basketball coach Lou Carnesecca at the organization's annual luncheon, in New York. Krzyzewski and Carnesecca are among those who teamed up with Madison Square Garden for a video posted on social media Wednesday night, May 13, 2020, saluting essential workers leading the fight against the coronavirus. (AP Photo/Richard Drew, File)

Many of college basketball’s top coaches and biggest rivals have teamed up with Madison Square Garden for a video on social media saluting essential workers leading the fight against the coronavirus.

Duke coach Mike Krzyzewski, Michigan State’s Tom Izzo and Villanova’s Jay Wright are some of the big names saying thank you in the 60-second spot, most of them appearing to be in their homes or backyards.

Like plenty of other folks staying sheltered during the pandemic, a few of the coaches have stopped shaving regularly. Kentucky’s John Calipari and North Carolina’s Roy Williams sport thick gray beards, while Georgetown’s Patrick Ewing has a dark one.

Tony Bennett (Virginia), Jim Boeheim (Syracuse) and Bill Self (Kansas) were also among the 15 active coaches who participated. Rick Pitino appears in an Iona basketball T-shirt, the program he recently took over.

The video was posted Wednesday night. It opens with an aerial view of Madison Square Garden in the heart of New York City, and Krzyzewski saying, “The college basketball community is calling a timeout” as he signals for one.

It concludes with another shot of MSG and 95-year-old former St. John’s coach Lou Carnesecca saying, “We'll see you back at the Garden!”

The Drew League, a highlight of the summer basketball season in Los Angeles since 1973, has canceled its schedule for this year because of the coronavirus pandemic.

The league has attracted some of the NBA’s best players in recent years, with the likes of Kobe Bryant, Kevin Durant, Paul George and James Harden all among those who have made appearances.

“Drew League is a summer tradition that we look forward to, and while we share in the disappointment of our fans, the health and safety of our athletes and community is our top priority,” the league said Wednesday in announcing its decision.

The St. Paul Saints will hold a virtual home opener next week, with the independent minor league baseball club unable to start their defense of the American Association championship due to the virus-related restrictions in place.

The Saints have dubbed the event “Nopening Day,” which will begin on Tuesday night at CHS Field with curbside pickup of free T-shirts for fans and end with a fireworks display at the empty 7,000-seat ballpark.

The Saints will then re-broadcast on their social media platforms the 2015 home opener that marked the first game at CHS Field in the Lowertown area of Minnesota’s capital city.

The team’s usual off-the-wall in-game promotions will be staged from the homes of various staff members. Then on a serious note, video clips honoring front-line workers at Twin Cities hospitals will be aired.

USA BMX is restarting racing next month at its headquarters in Tulsa, Oklahoma.

In addition to heightened sanitation practices, race organizers will allow for extra space between riders in the starting chutes and will ask participants to leave the finish-line area directly after races.

Albania’s soccer federation says league and other matches will resume in June but without fans in the stadiums, and the matches will follow a strict medical protocol.

Play has been suspended since mid-March following the country’s total lockdown due to the coronavirus outbreak.

The federation said Wednesday that 10 league matches and five Republic Cup matches will be staged from June 3 to July 29. The Albanian Cup final will be held Aug. 2.

The federation says holding the matches will follow the strict sanitary protocol it earlier drafted in consultation with UEFA and FIFA.

Oaklawn plans to reopen its casino next to the racetrack in Hot Springs, Arkansas, on Monday.

General manager Wayne Smith says state and health officials have given the go-ahead to do so with new health and hygiene protocols in place.

The casino will operate at 33% capacity, staff and visitors will have their temperatures checked upon entry and must wear masks, and guests must show ID in case contact tracing is needed.

Oaklawn’s racing season ended May 2 without spectators because of the coronavirus pandemic.

Rutgers is doing away with paper tickets to sports events in response to the COVID-19 pandemic.

The State University of New Jersey announced Wednesday that mobile-only ticketing to sports events will start this fall with the football season.

Rutgers said the new policy would enable contact-free entry into all venues and offer greater convenience and safety. The Big Ten Conference member said fans can access their ticket accounts through the Scarlet Knights’ app supported on Apple and Android devices.

Rutgers also said fans will have the ability to transfer tickets electronically.

The university will work with ticket holders at events should either their cell phone run out of power or they don’t have one.

The Italian soccer league is hoping to resume competition on June 13.

The date was agreed to during a video conference with all 20 Serie A clubs. It is subject to approval by the Italian government.

Full team training will restart on May 18 after a revised medical protocol was approved. The clubs have already resumed training on an individual basis.

There are 12 rounds remaining in Serie A along with four matches that were postponed from the 25th round. The Italian Cup is in the semifinal stage.

Beach volleyball teams will have an extra year to qualify for the Tokyo Olympics.

The system will otherwise remain the same.

Most teams qualify by earning points on the international tour. The deadline for Tokyo had been this June but now it will be June 13, 2021. Additional spots in the Olympic tournament will be decided at continental tournaments that will be held until June 27 of next year.

The FIVB world tour is currently on hold because of the coronavirus pandemic.

Ferrari says it has developed a ventilator for hospitals dealing with the coronavirus pandemic.

The Formula One team says it created a device that is easy to use and assemble in conjunction with the Italian Institute of Technology. Ferrari says it was designed in only five weeks and can be produced using easily available materials at a lower cost than normal ventilators.

The ventilator has been designed to meet the typical demands of medium intensive care and the technical specifications are available as an open source project.

Players from Spanish soccer club Elche have not practiced as a protest against reduced salaries.

The players for the second-division club were supposed to practice at the team’s stadium but decided to keep training at home to show their discontentment with the team’s decision not to lift the furloughs that had been put in place because of the coronavirus pandemic.

Players want to resume earning full salaries now that they are back to training.

The players practiced normally on Tuesday. The club says it is negotiating with them.

The club used government furloughs to reduce its labor costs during the pandemic. Players had their salaries and working hours reduced by 70%.

Elche was sixth in the 22-team second-division standings when the competition was suspended after 31 matches.

The Portuguese soccer league says it will delay its restart until June 4.

The league was expected to resume at the end of May but will wait another week so there is time to “rigorously inspect stadiums and conduct medical tests on all professionals involved” in the matches.

The league says it hopes to serve as an example of “good practices” for the rest of the Portuguese society during the coronavirus pandemic.

The league was stopped with Porto leading Benfica by one point with 10 rounds to go.

The players at French rugby club Toulouse have offered to take a pay cut amid the coronavirus pandemic.

The players at the 20-time French champions say they told club president Bernard Lemaitre they are willing to accept “a significant decrease” in earnings. They did not give any figures regarding the amount of the proposed decrease.

Lemaitre praised his players for their “spontaneous and unanimous” offer amid challenging economic times.

He says it “further reinforces our motivation and our desire to meet the challenges of tomorrow.”

The French league was canceled after the government called it off late last month. The semifinals of the Top 14 league will not be played.