The Latest: College sports allowed to resume in New Mexico 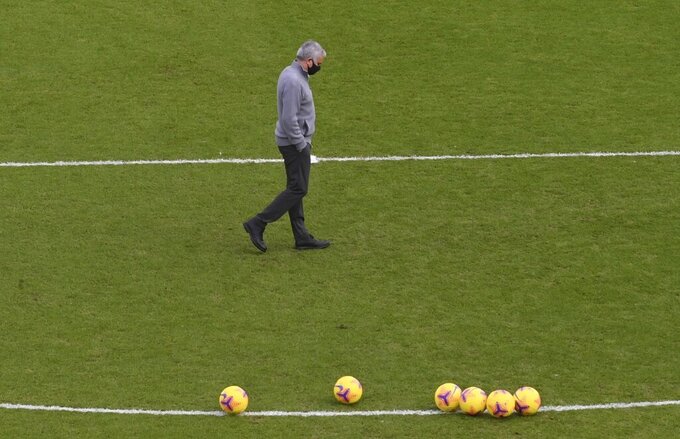 The ruling is contingent upon strict testing procedures.

New Mexico’s football team temporarily relocated to Las Vegas to play its 2020 season due to strict coronavirus measures in its home state. The men’s and women’s basketball programs have been practicing and playing in Texas.

New Mexico State’s men’s and women’s basketball teams have spent most of their seasons in Arizona.

The Aggies’ men’s basketball team has played three games — none since Dec. 1 — due to COVID-19 postponements and cancellations.

D.J. Trahan has withdrawn from this week's PGA Tour event, The American Express, after testing positive for the coronavirus. He was replaced in the field by Michael Gellerman.

Trahan is the 22nd player to test positive since the tour returned to competition in June following a three-month shutdown.

This is the third straight event of 2021 in which a player has tested positive either onsite or from pre-travel screening at home. Jim Herman had to withdraw from the Sentry Tournament of Champions with a positive test before leaving for Maui, and Jhonattan Vegas tested positive at the Sony Open.

The league announced the postponements Tuesday, two days before both games were scheduled to be played.

N.C. State remains in COVID-19 protocols and hasn’t played since beating Boston College on Jan. 3. The league announced that there had been a positive COVID-19 test, quarantining and contact tracing within the Wolfpack program two days after that game.

The school last week announced a cluster of cases associated with Wolfpack athletics, though it didn’t specify which programs were involved. But coronavirus concerns within the Wolfpack men’s basketball team have led to the postponements of its past two games as well.

The postponement of the Clemson-Boston College women’s basketball game followed coronavirus concerns within the Eagles program. The league has instead scheduled for Clemson to visit FSU on Thursday, moving up a game originally scheduled for next Tuesday.

The No. 12 Texas Tech men's basketball team has had its second Big 12 game postponed this week because of COVID-19 issues for its scheduled opponent.

The conference on Tuesday postponed the Red Raiders’ home game Saturday against Iowa State, which will be the fourth game in a row the Cyclones will be unable to play.

The Red Raiders' next scheduled game is Monday night at No. 14 West Virginia. The Mountaineers, who haven’t played since Jan. 9, are scheduled to play at Kansas State on Saturday.

Christian tweeted that he was told of his test result on Tuesday, a day after he said he was “experiencing some slight symptoms.”

GW said that its games at Dayton on Wednesday and at Rhode Island on Sunday are off and all program activity will be put on pause.

The school is having its team go through additional testing for the novel coronavirus and contact tracing.

George Washington’s next scheduled game is supposed to be Jan. 27 at George Mason.

The Kennesaw State women’s volleyball team called off the first two games of its spring season because of positive COVID-19 tests.

The Owls were scheduled to open at home Friday against UAB, followed by a return match between the schools in Birmingham, Alabama, on Sunday.

Both games were canceled. Kennesaw State now plans to begin its season at Bellarmine in Louisville, Kentucky, on Feb. 5.

The Southeastern Conference has postponed Wednesday night’s game between Texas A&M and Vanderbilt.

The league says the postponement is because of a combination of positive COVID-19 tests, contact tracing and subsequent quarantining inside the Vanderbilt program. A make-up game has not been set.

Vanderbilt had to postpone a game due to COVID issues on Jan. 12 against Tennessee that was scheduled after COVID issues at Missouri postponed the Commodores’ road game previously set for that same day. Vanderbilt (4-6, 0-4) lost last weekend 81-61 to then-No. 10 Tennessee.

This is now the third SEC game Vanderbilt has had postponed. The Commodores started the season with the first four games canceled. Vanderbilt’s next game is Saturday against Arkansas.

The COVID-19 problems aren't just affecting the Vandy men. The Vanderbilt women’s basketball program announced Monday it was discontinuing the season because of a depleted roster.

Rutgers women’s basketball has postponed home games on Thursday against Penn State and Sunday against Iowa.

The Scarlet Knights (5-3) have not played since an outbreak of COVID-19 hit the team on Jan. 3. By the end of this week, they will have postposed six games with only 10 left on the schedule.

Rutgers has not announced any recent positive tests, but it cannot play because of protocols outlining a return to competition after positive COVID-19 tests among Tier 1 individuals.

The schools will work with the Big Ten office on rescheduling options later this season.

Rutgers' next scheduled game is at Maryland on Jan. 28.

Benfica says 17 positive COVID-19 tests have been detected among its staff and players, including Belgium defender Jan Vertonghen and German forward Luca Waldschmidt.

The Portuguese soccer club says altogether five players are among those who tested positive for the coronavirus.

Benfica has contacted local health authorities for guidance on whether it should continue competing in the next few weeks.

The NFL says the latest round of COVID-19 testing turned up three positive tests among players and six among other personnel as the Super Bowl nears.

The new results bring the totals since testing began in August to 262 players and 460 other personnel who were confirmed positive out of nearly 950,000 tests.

The NHL has postponed its first game since the league’s season began, postponing Tuesday night’s game between the Carolina Hurricanes and the Predators hours after the teams played the first of a two-game set in Nashville.

The league only said the game was postponed to ensure the health and safety of players, coaches and game-day personnel.

For the Hurricanes, captain Jordan Staal had been the only player on the NHL’s unavailability list due to COVID-19 protocols. Staal had been on that daily list since Friday, with the Hurricanes losing at Detroit on Saturday then winning Monday 4-2 at Nashville in that span. Nashville’s only player on the unavailability list has been forward Mikael Granlund who only arrived back in Tennessee from Finland on Friday and is in quarantine before joining the Predators.

The NHL has not announced a make-up date.

The teams aren’t scheduled to play again in Nashville until the end of the season, with back-to-back games on May 7-8.

The Atlantic Coast Conference announced Tuesday that the men's basketball game between Boston College and No. 12 Virginia Tech on Wednesday has been postponed.

The postponement follows a positive test, subsequent quarantining, and contact tracing within the Boston College men’s program. The league says the team is adhering to ACC protocols.

No makeup date has been announced.

The Kentucky women’s basketball game at Tennessee has been rescheduled for Sunday.

The game had initially been scheduled for Jan. 3 but was postponed because of COVID-19 issues within the Lady Vols program. The Wildcats are ranked 12th and Tennessee 25th. The Lady Vols originally were scheduled to play Vanderbilt on Sunday, but the Commodores announced Monday they were discontinuing their season because of a depleted roster.

The other Southeastern Conference women’s games Sunday include: Auburn at Alabama, South Carolina at LSU, Florida at Mississippi and Texas A&M at Missouri.

The French soccer federation says amateur clubs will take part in this year’s French Cup after the ministry of sports agreed to the move amid the coronavirus pandemic.

The federation says amateur teams in France and overseas territories involved in the 104th edition of the yearly tournament have been allowed to resume training immediately.

The federation says the decision will ensure “the smooth running of a competition emblematic of the unity of French soccer.”

All matches will be played without fans and in the afternoon to avoid a clash with the nationwide 6 p.m. curfew. Players will undergo tests two to three days before each game and will have another test on the day of the match.

No matches will be postponed if there is a COVID-19 outbreak at a specific club. Teams will instead be forced to forfeit.