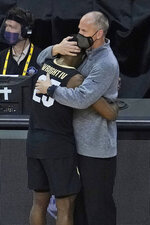 Colorado has been in Indianapolis for the tournament since last week, but the team spoke postgame in the locker room about the supermarket shooting in the city where the school is located. Ten people were killed, including a police officer, and a suspect was in custody, authorities said.

“It puts basketball in its proper place,” Boyle said after a 71-53 loss to the Seminoles. “Win or lose tonight, I felt an emptiness in my stomach. Another senseless act of violence that we’ve experienced as a country many, many times.

“Even if we would have won this game and celebrated going to the Sweet 16, it would have put a damper on it,” he added. "My heart goes out to the families that were affected and those that lost their lives.”

The university cancelled all classes after 5:30 p.m., and an alert from the university said many students, faculty, staff and alumni live and work in the neighborhood where the shooting occurred.

Marcus Zegarowski and Creighton have found their shooting touch after a cold start, and the Bluejays lead Ohio 39-24 at halftime in the West Region.

Zegarowski has 13 points on 5-of-9 shooting, including 3 for 3 from behind the arc. The fifth-seeded Bluejays missed their first five shots but hit 17 of 29 (58.6%) for the rest of the half.

Creighton is trying to make the NCAA Sweet 16 for the first time since the tournament expanded to 64 teams in 1985 and its first regional semifinal overall since 1974, when the tournament had just 25 teams.

The leader of an organization that advocates for fairness in the treatment of college athletics has requested that NCAA President Mark Emmert meet via videoconference Tuesday with basketball players who launched the #NotNCAAProperty movement.

Ramogi Huma, executive director of the National College Players Association, wrote in a letter to Emmert that he and the players leading the movement want to discuss “the NCAA’s prohibition on college athlete compensation for use of their name, image and likeness as well as the unacceptable discriminatory treatment of female athletes in the NCAA March Madness Tournament and throughout NCAA member institutions.”

Jordan Bohannon of Iowa, Isaiah Livers of Michigan and Geo Baker of Rutgers helped start the movement. The hashtag #NotNCAAProperty was trending on social media.

An NCAA spokesperson said in a statement Sunday that Emmert “would be happy to connect either virtually or in person when appropriate with any student-athletes who want to engage.”