The Latest: Cubs to use Wrigley as food distribution hub 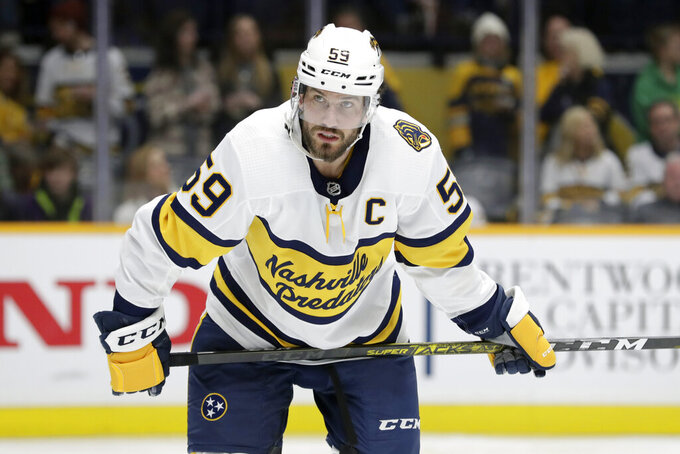 FILE - In this Sunday, Feb. 16, 2020 file photo, Nashville Predators defenseman Roman Josi, of Switzerland, plays against the St. Louis Blues in the third period of an NHL hockey game in Nashville, Tenn. Predators captain Roman Josi and his wife, Ellie, gave $20,000 to Second Harvest Food Bank of Middle Tennessee and another $20,000 to a local homeless ministry. (AP Photo/Mark Humphrey, File)

The Chicago Cubs are putting Wrigley Field to use as a food distribution hub to help support COVID-19 relief efforts.

The Cubs said they will use the famed ballpark’s concourse as a food-packing and distribution center starting this week while working with Lakeview Pantry.

The team also plans to open the Hotel Zachary it owns across the street from Wrigley to workers at Advocate Illinois Masonic Medical Center through the end of the month. Hotel staff will be required to wear personal protective equipment while working and follow social distancing guidelines.

The parent company that oversees the NHL Buffalo Sabres announced a series of cost-cutting measures, including layoffs and furloughs affecting 125 employees as a result of the new coronavirus pandemic.

Pegula Sports and Entertainment says 104 employees are being furloughed, while another 21 were laid off on Tuesday. A person told The Associated Press the laid-off employees were informed they were fired, and spoke on the condition of anonymity because that information wasn’t included in the news release.

PSE also said more than 36 employees, including management, hockey staff and broadcasters, will have their salaries reduced temporarily.

PSE says it will continue to pay health insurance coverage for furloughed employees.

The cuts won’t affect the staff of the NFL's Buffalo Bills, who are also owned by Terry and Kim Pegula. Their Buffalo-based company employs more than 3,000 across its various holdings.

Seattle’s expansion NHL franchise along with arena operator Oak View Group say they have raised $1 million to support at-risk families in the city and help nonprofit organizations on the Seattle Center campus where the team’s new arena is being constructed.

NHL Seattle and OVG say the leadership, staff and partners of the two organizations have come together to help make the donations. The first donation of $800,000 will be to the United Way of King County and will be distributed as grocery vouchers to those who have recently lost their jobs or seen their hours significantly reduced due to the COVID-19 virus pandemic.

Another $200,000 is being earmarked as grants for 21 different nonprofit organizations that share the Seattle Center campus.

NHL Seattle CEO Tod Leiweke says bringing the NHL to Seattle was born out of a strong partnership with the city and, “we are committed to giving back to those among us with an urgent and immediate need.”

“The COVID-19 pandemic has had a major impact on Wake Forest University and our Athletics Dept.,” Clawson said. ”(Wife) Catherine and I are more than happy to do our part to help during these challenging times.”

Baseball Hall of Famer Greg Maddux spent his 54th birthday live tweeting as MLB Network replayed some of the best performances of his brilliant career. He also was raising money for coronavirus victims.

Maddux vowed to match up to $54,000 in donations for virus victims as part of his birthday celebration.

One of the game’s most notorious pranksters, Maddux took the occasion to poke fun at some of his former Atlanta Braves teammates, including John Smoltz.

“Who’s watching 1995 World Series Game 1 on @MLBNetwork,” Maddux wrote during a showing of his two-hit masterpiece. “Solid dugout shot when we could see smoltzy with some hair.”

Maddux also discussed a disputed call in the pre-instant replay era, which brought longtime Braves manager Bobby Cox out of the dugout to argue with the umpires.

“Where’s replay when you need it?” Maddux tweeted. “Great to see Bobby always fighting for his players.”

There will be no Golden Spikes Award this year, ending a streak of 42 consecutive seasons.

USA Baseball made the announcement Tuesday. It followed the NCAA’s decision to cancel spring sports seasons due to the new coronavirus.

The Women’s Basketball Hall of Famer then stated her desire to keep the Bulldogs’ program among the nation’s elite and win a national championship.

“My expectations for the program are to continue to build on this tradition and compete for SEC championships and national championships every year,” McCray-Penson said Tuesday during an introductory video teleconference.

The Nashville Predators have raised $2.7 million to help both with tornado and COVID-19 relief.

The Predators started raising money after tornadoes hit Nashville and Middle Tennessee in early March. Then the franchise included help for the coronavirus pandemic once the NHL stopped play along with the cancellation of the Southeastern Conference men’s basketball tournament in Nashville.

Sean Henry, the Predators’ president and chief executive officer, said Tuesday that commitment to the community is a cornerstone of the franchise and the Predators are trying to help rebuild and provide help for a return to normalcy as quickly and safely as possible.

Predators captain Roman Josi and his wife, Ellie, gave $20,000 to Second Harvest Food Bank of Middle Tennessee and another $20,000 to a local homeless ministry.

The Predators also gave donors to the team’s foundation a chance to redirect money to tornado and COVID-19 relief with $700,000 in grants being handed out this month.

All-Star Celtics forward Jayson Tatum says he hasn't touched a basketball since scoring 30 points in a win over the Indiana Pacers on March 10.

“I got weights and bands and a bike to do some cardio,” Tatum said Tuesday after informing Emoni Bates he became the first sophomore to win Gatorade’s national player of the year award in basketball. “It’s tough, but on the other side, I know there are more important things going on in the world,”

Since the NBA suspended its season due to the coronavirus pandemic, Tatum has tried to make the best of an extended stay at his home in the Boston area.

“I’ve been taking time to relax and be at home with my son every day,” he said in a telephone interview. “I am trying to enjoy this time and the things we usually take for granted.”

Major League Soccer says its hopes of returning in mid-May are “extremely unlikely.”

In a statement Tuesday, the league said guidance from federal and local public health officials is making it unlikely the league will be able to restart in about a month.

MLS says the goal remains to play as many games as possible, but it’s becoming increasingly difficult to potentially play an entire season even if there are enough dates available.

MLS currently has a training moratorium for players through April 24.

The NHL will remain on pause through at least the end of the month.

The league on Tuesday announced it was extending its self-quarantine recommendation for players, coaches and staff through April 30. The announcement marks the third time the NHL has pushed back its timetable since suspending play on March 12 because of the new coronavirus.

Players and staff were previously given the opportunity to self-isolate at their offseason homes.

There is no timetable of when play might resume and whether the NHL will be able to complete the regular season or start the playoffs, which could stretch into September. There were 189 games remaining when play was suspended.

The German soccer league has delayed a meeting of clubs that was expected to set out a timetable for resuming games in empty stadiums.

Clubs from the top two divisions were to meet Friday but that has been delayed until April 23.

The league had hoped to resume play next month but Germany’s federal political system could allow numerous state and federal officials to obstruct games if they disagree.

The league says clubs need extra time to prepare and that any decisions made will be “based on the current political decision-making situation at federal and state level over the coming week.”

The Senior British Open golf tournament has been postponed because of the coronavirus outbreak.

The event was scheduled to take place at Sunningdale from July 23-26.

R&A official Johnnie Cole-Hamilton says organizers are looking at alternative options to host the tournament “later in the year if at all possible.”

UEFA says it will host another round of calls next week for European soccer leaders to address the shutdown amid the coronavirus pandemic.

The UEFA executive committee is set to join by video link on April 23. It will follow separate days of calls with UEFA’s 55 member federations and club soccer officials.

UEFA is giving priority to completing national league and cup competitions. One contingency plan is for games to continue into July and August and decide entries for the Champions League and Europa League next season.

This season’s Champions League and Europa League could resume once domestic titles are decided.

The UEFA executive committee last month postponed the European Championship by one year to 2021. Other games affected include World Cup qualifying groups, the 2021 Nations League finals and the women’s Euro 2021 tournament in England.

The Asian Football Confederation says it has postponed “all matches and competitions scheduled to take place in May and June until further notice.”

Most of the 32 Asian Champions League teams played two group games in February before the coronavirus outbreak caused a shutdown.

The AFC says it “will explore all possible options in order to complete” those groups.

The inaugural Saudi Ladies International on the Ladies European Tour was to be played last month but was postponed because of the coronavirus pandemic.

The $1 million event will now be played from Oct. 8-11 at Royal Greens Golf and Country Club at King Abdullah Economic City.

The Tour de France won’t begin as originally planned because French President Emmanuel Macron has canceled all public events with large crowds through mid-July in response to the coronavirus pandemic.

Tour organizers say it is now impossible for the three-week race to start on June 27 in the Riviera city of Nice as scheduled.

It is unclear if cycling’s biggest event will be scrapped from the race calendar. New plans are likely to be announced before the end of the month following consultations with the governing body of cycling.