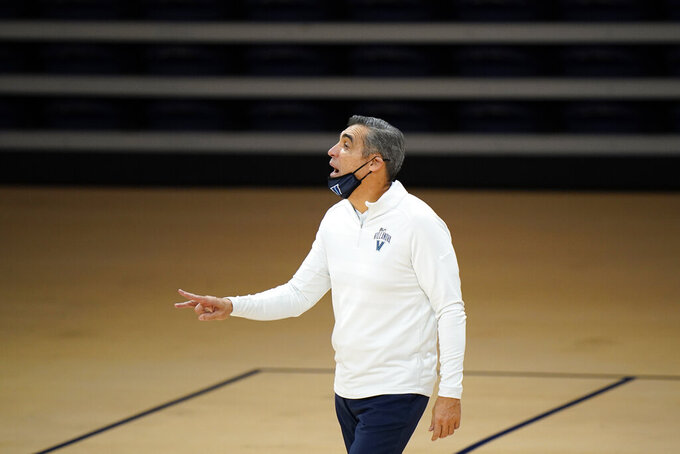 That means the Buccaneers have postponed Wednesday night’s home game against VMI and a road trip to Wofford on Saturday. This is the second time this season ETSU’s schedule has been affected. The Bucs’ trip to UNC-Ashville on Dec. 8 also was postponed.

Barcelona says two of its staff have the coronavirus.

The unnamed staff tested positive on Monday, and the whole squad will undergo more tests on Tuesday.

Training scheduled for Tuesday morning has been postponed.

Barcelona is scheduled to play Athletic Bilbao on Wednesday in the Spanish league.

The American Hockey League says three teams have opted out of playing this season, while four others have been given permission to temporarily relocate.

The Charlotte Checkers, Milwaukee Admirals and Springfield Thunderbirds opted out and will return in 2021-22. Those teams are affiliates of the Florida Panthers, Nashville Predators and St. Louis Blues, respectively.

The Blues worked out an agreement to send players to Utica, the top farm team for the Vancouver Canucks. The Predators said they’re pursuing options. The Panthers’ plans were not immediately clear.

The Binghamton Devils will play home games in Newark, New Jersey, where their NHL affiliate is located. The Ontario Reign will play in El Segundo, California; the San Diego Gulls in Irvine, California; and the Providence Bruins in Marlborough, Massachusetts.

The Pepperdine men’s and women’s basketball teams will postpone their West Coast Conference games this week. Both programs had already halted activities because of recent positive COVID-19 tests.

The men’s game at San Francisco on Thursday is off as well as the women’s game the same day against San Diego. Saturday’s women’s game against BYU is also postponed.

Both programs had to postpone two games each last week.

The men are next scheduled to play at No. 1 Gonzaga on Jan. 14, while the women’s next game is against Loyola Marymount on Jan. 16.

St. John’s says its last-minute postponement of Saturday’s men’s basketball game against DePaul was caused by testing and lab irregularities.

Athletic Director Mike Cragg says the decision was a tough one but the right choice. Cragg says follow-up testing has delivered good news and team doctors and university health officials have agreed that the program can resume full operations.

The Red Storm will resume play on Wednesday night at Xavier.

The FA Women’s Super League club did not identify the affected players but said they were self-isolating in accordance with Football Association and U.K. government protocol.

Manchester City is scheduled to host the West Ham women behind closed doors on Saturday.

The Manchester City men have also been hit by COVID, with six players missing from Sunday’s 3-1 win at at Chelsea.

The Premier League will continue during the latest lockdown in England.

British Prime Minister Boris Johnson has announced there will be another lockdown starting on Wednesday and lasting until at least mid-February.

But the government says elite sportspeople will be allowed to compete and train. That means there will be no suspension of the Premier League or England’s other professional soccer leagues.

All English soccer was suspended for more than three months when the pandemic was declared in March.

Duke coach Mike Krzyzewski says he won't be able to coach the No. 21 Blue Devils when they face Boston College on Wednesday night, but he hopes to be out of quarantine in time to return for their game against Wake Forest on Saturday.

Krzyzewski said he found out about the quarantine as he was getting on the bus to go to Florida State. The Blue Devils traveled to Tallahassee, Florida without Krzyzewski, but found out after a team meeting Friday night that the game was being postponed.

The noon start of the Wake Forest game is right at the end of the quarantine and Krzyzewski said he will have to get guidance from health officials on whether he can return.

No. 3 Villanova’s next three games have been postponed because of COVID-19 issues within the program.

The Wildcats (8-1) were scheduled to play Tuesday at DePaul, Friday vs. Marquette, and Jan. 13 at Xavier.

No makeup dates have been announced.

Coach Jay Wright announced last week he had tested positive for COVID-19 and the program paused all activities. Wright was scheduled to return to practice on Tuesday.