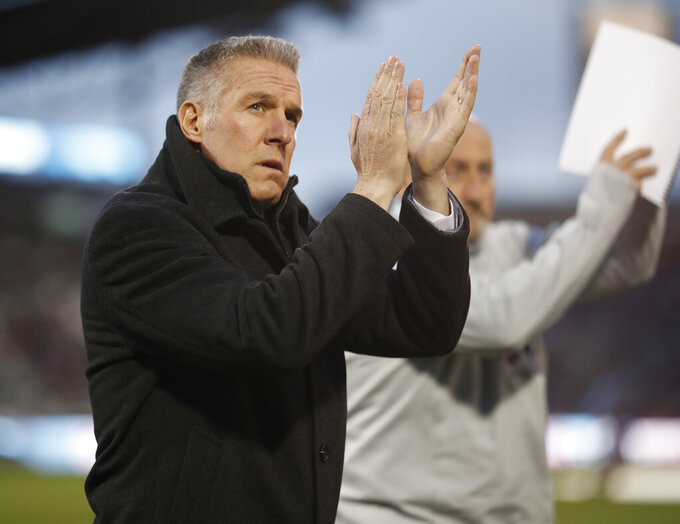 FILE - In this March 24, 2018, file photo, Sporting Kansas City's Peter Vermes acknowledges fans as he takes the pitch to lead his team against the Colorado Rapids in an MLS soccer match in Commerce City, Colo. Major League Soccer coaches are welcoming the opportunity to use five substitutes when play resumes in Florida next month, out of concern for both player fitness and the summertime heat. The adoption of the rule and the expansion of game-day rosters are especially important given the relatively short preparation time teams have had for the MLS Is Back Tournament, which starts July 8, 2020, at the sports complex at Walt Disney World. (AP Photo/David Zalubowski, File)

All 14 players and two student managers are in quarantine at a designated on-campus residence hall for the next two weeks.

Players who tested negative were placed in quarantine as a precaution and will be tested again. The two support staffers who tested positive will remain at home for two weeks.

The Colorado Rapids of Major League Soccer announced on their website that one of their players tested positive for COVID-19.

The Rapids' medical staff is working with local infectious disease specialists to treat the player. The team said the unidentified player was asymptomatic and feeling well. The player also is adhering to isolation protocols.

All of Colorado’s players and personnel were informed and asked to isolate. The club said training has been temporarily suspended to conduct more testing. The Rapids have also started contact tracing.

The National Baseball Hall of Fame and Museum is preparing to reopen on Friday, in accordance with New York state’s phased plan.

The use of face masks for all staff and guests will be required, and free single-use masks will be available at the museum entrance for visitors who do not have one. Capacity will be limited and admission will be based on a timed ticketing process to allow for physical distancing.

Tickets are available for purchase at baseballhall.org on a first-come, first-served basis.

All exhibit spaces are expected to remain open and functional, and guests will receive a rubber-tipped stylus to use when interacting with touch screens and buttons.

Directional markers have been added to museum spaces and more than 25 hand-sanitizing stations have been placed throughout the building. The Hall of Fame’s larger gathering spaces, such as the Grandstand Theater and Bullpen Theater, will remain closed.

Dipoto declined to specify the number of players or if they are part of Seattle’s 40-man roster. Dipoto said they have all been asymptomatic.

“With the cases popping up, especially in some of the hot spots around the country, we have had a few players test positive,” Dipoto said. “Right now they’re asymptomatic, they feel great, but we are aware that they’re positive.”

The Mariners expect players to begin arriving this weekend in Seattle for workouts leading into the start of the season in late July. Some players had been working out at the team’s spring training facility in Peoria, Arizona, but Dipoto did not specify where the players that had the positive tests were located.

“Obviously, they will not be in the environment when we open up until we’ve determined either A) they are part of the roster group, or B) they’re healthy enough to be a part of that,” Dipoto said.

The University of Northern Colorado will discontinue the men’s and women’s tennis programs as part of a cost-saving effort due to budget shortfalls created by the COVID-19 pandemic.

“This is one of the most excruciating decisions you can be involved in as an athletics director,” Northern Colorado director of athletics Darren Dunn said. “There is no right time or easy way to come to this conclusion. ... Unfortunately, due to facility and budget limitations, we cannot provide a championship experience for our tennis student-athletes.”

The university said it projects more than $500,000 in savings with all of its athletics cost-saving measures.

A person familiar with the situation tells The Associated Press that several players and staff members of the Toronto Blue Jays have tested positive for the coronavirus.

The person confirmed the test results to the AP on condition of anonymity Wednesday because there was no official announcement but did not specify a number. “We aren’t confirming names or numbers for positive tests,” the person said.

The Blue Jays closed their training facility last Friday in Dunedin, Florida, after a player showed symptoms consistent with the virus.

Baseball Commissioner Rob Manfred imposed a 60-game season Tuesday night after failed negotiations between owners and players. The season that’s been delayed by the pandemic will begin either July 23 or 24.

Many players around the majors have been working in recent weeks at either their home ballparks or their team’s spring training complexes in Florida or Arizona. MLB closed all camp sites last Friday because of virus concerns.

It remains unclear where the Blue Jays will hold their training camp and play home games this summer. The Canadian government is open to Major League Baseball playing in Toronto this summer, but the league had not submitted the required plan to health authorities.

— Reporting by Rob Gillies in Toronto.

Navy football coach Ken Niumatalolo remains optimistic that the Midshipmen won’t be playing in an empty stadium in the season opener at home against Notre Dame.

The longest continuous intersectional rivalry in the country was moved from Ireland to Annapolis because of COVID-19 and is tentatively scheduled for Sept. 5.

“At this point I feel good about all the plans we have in place,” Niumatalolo said Wednesday. “Obviously it won’t be a full stadium and it will be a lot different from other games that we’ve ever played at the Naval Academy, but that’s the new norm now.”

This will be the first time Notre Dame visits Navy-Marine Corps Memorial Stadium in the 94-year history of the rivalry. It will not be sellout because social distancing will be required.

“I would love to have the stadium packed with all of our fans,” Niumatalolo said. “I’m grateful that there will be some fans there if we do play, and it looks like everything is pressing forward that way.”

The University of Connecticut is eliminating four athletic teams as it deals with an expected budget deficit driven by issues related to the coronavirus pandemic.

UConn President Thomas Katsouleas told the school’s Board of Trustees Wednesday that the school will reduce the number of sports it supports from 24 to 20, eliminating its men’s cross-country, men’s swimming and diving, men’s tennis and women’s rowing teams.

He said eliminating those programs, along with mandating a 15% cut in the operating budget of all sports and cutting some scholarships, should result in a requested savings of $10 million annually, or 25% of the school’s subsidy to the Division of Athletics over the next three years. That subsidy was $42 million in 2019.

The school will continue to support the eliminated sports through the 2020-21 academic year, allowing the 124 affected athletes time to transfer or make other decisions, officials said.

“While this is a painful decision, it is in the best interests of the long-term viability of UConn and of UConn athletics,” Katsouleas said.

The decision came as the Board of Trustees approved a $1.5 billion spending plan for its main campus in Storrs and regional campuses.

Avila said on a video conference that the player was living in Florida, but was not working out at the team’s spring training facilities in Lakeland. He did not identify the two people who tested positive.

“They’re going through the process, obviously, of recovering as we speak,” Avila said. “It was just recently, a few days ago, so they’re still in the recovery stages, and at some point they’ll be tested again.”

With baseball returning for a shortened season, the Tigers are set to have training camp in Detroit.

Fans will be required to wear masks, maintain social distancing and follow safety protocols to avoid the spread of COVID-19.

The race track will open the first and second floors of the clubhouse. All fans must wear masks or a face covering upon entering the facility.

Pimlico is scheduled to host the Preakness on Oct. 3.

Nearby Laurel Park remains closed to the general public.

This year's Berlin Marathon has been canceled following months of uncertainty caused by the coronavirus pandemic.

Organizers say “after extensive examination and various discussions” they were not able to find a later date. Authorities in Germany have blocked the hosting of major events through October.

The marathon was scheduled for Sept. 27.

The Berlin Marathon is one of the fastest in the world. The current men’s world record was set in Berlin by Eliud Kipchoge in 2018.

It will be the first year with no Berlin Marathon since the race was founded in 1974.

The announcement came on the same day that the New York City Marathon was canceled. That race had been scheduled for Nov. 1.