The Latest: Marquette halts all basketball for 2 weeks 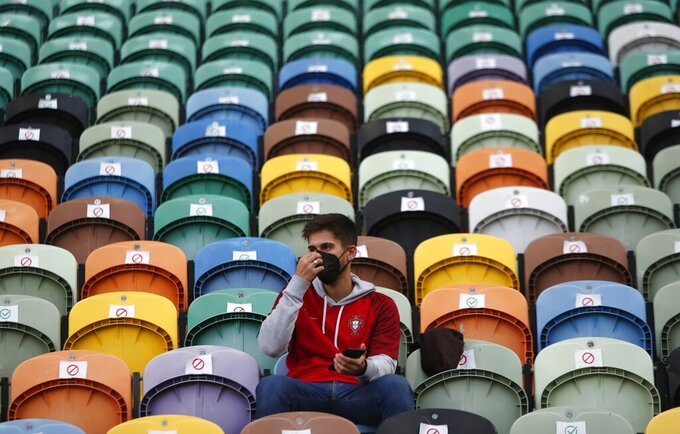 A fan wearing face mask to protect against coronavirus waits for the start of the UEFA Nations League soccer match between Portugal and Sweden at the Jose Alvalade stadium in Lisbon, Portugal, Wednesday, Oct. 14, 2020. (AP Photo/Armando Franca)

Marquette University has paused all men’s and women’s basketball team activities for 14 days after each program received one positive COVID-19 test.

School officials said the most recent round of testing that took place Monday produced two positive results out of 45 tests of men’s and women’s basketball players as well as NCAA-defined Tier 1 team personnel. All individuals within Tier 1, which includes coaches, trainers, physical therapists, medical staff, equipment staff and other team personnel will quarantine for 14 days.

Marquette’s athletic department has conducted a total of 809 tests of athletes and staffers since Aug. 28. There have been eight positive cases.

Swiss soccer club Sion says its entire first-team squad has been placed in quarantine and it asked the league to postpone its next two games.

Sion says players have to wait 10 days before returning to training, and it wants the league to postpone matches on the next two Sundays, Oct. 25 and Nov. 1.

The 10-team Swiss top division already postponed one of its five scheduled games this weekend.

Basel will not play on Sunday because it has 10 players in quarantine and one player who tested positive for COVID-19 is self-isolating. Basel also had its game last weekend postponed. Both games have been rescheduled for November.

Switzerland has one of the fastest-rising infection rates in Europe.

The Washington Football Team will allow only friends and family in attendance at FedEx Field on Sunday against the Dallas Cowboys, even after Maryland Gov. Larry Hogan allowed teams to fill outdoor stadiums to 10% capacity.

A spokeswoman said there would be no change from Washington’s previous arrangement to not sell tickets to fans for this game at the stadium in Landover, Maryland. At 10% capacity, roughly 8,000 fans would be allowed, something that remains possible later this season.

The results came on Tuesday during regular weekly testing and a day after the school said coach Tod Kowalczyk had tested positive for COVID-19 and was self-isolating for 10 days.

Those players who tested positive also will self-isolate, the university said.

The Carolina Panthers have added kicker Joey Slye and offensive tackle Trent Scott to the COVID-19 reserve list, bringing their total number of players on the list to four.

Still, the Panthers practiced as normal Wednesday in preparation for their game Sunday at New Orleans.

Scott becomes the third reserve offensive lineman to be placed on the COVID-19/reserve list in the last six days, joining Tyler Larsen and Michael Schofield.

The moves don’t necessarily mean those players have tested positive; they could have come in close contact with someone who has tested positive. It’s unclear at this point if they’ll be cleared to play Sunday against the Saints. The Panthers don’t currently have a backup kicker on the roster or practice squad.

Maria Torres has withdrawn from the LPGA Tour event in Georgia this week because her caddie tested positive for the coronavirus. Torres says she has no symptoms but is self-isolating because of their contact.

The LPGA also says a child care provider tested positive at the LPGA Drive On Championship-Reynolds Lake Oconee. The children in child care on Monday who had close contact with the teacher also are quarantined. The LPGA says based on CDC guidance, the players of the children are not considered contagious as “contacts of a contact and do not require isolation.

The Cincinnati Bengals have started offering ticket packages that include their last five home games after a variance from the state that increases the number of fans allowed at Paul Brown Stadium.

Ohio now permits up to 12,000 people for games at the stadium, but the Bengals say actual capacity likely will be less because of social distancing and other COVID-19 precautions. The venue seats 65,535.

The 12,000 limit is double what was allowed for the Oct. 4 game against the Jacksonville Jaguars. The home opener on Sept. 13 against the Los Angeles Chargers was played without fans.

The Bengals (1-4-1) play the AFC North rival Cleveland Browns (4-2) on Sunday in Cincinnati.

Inter Milan defender Achraf Hakimi has tested positive for the coronavirus and will miss the Champions League match against Borussia Mönchengladbach.

Hakimi was found to have the virus in the last round of tests ahead of Wednesday’s match.

Hakimi joined from Real Madrid in the offseason. He spent the previous two years on loan at Borussia Dortmund. The wing back has already been involved in several Inter goals.

Wolfsburg says forward Josip Brekalo has tested positive for the coronavirus and is in isolation.

The club says the Croatian “is feeling good and is currently without symptoms.” The club also says the rest of the squad and coaching staff tested negative.

The isolation period will likely keep Brekalo out of Saturday’s game against Arminia Bielefeld.

Brekalo has scored once in four Bundesliga games this season for 13th-place Wolfsburg. He last played in Wolfsburg’s 1-1 draw with Borussia Mönchengladbach on Saturday.

The United States won’t send a team to the world wrestling championships because of health and safety concerns caused by the COVID-19 pandemic.

The executive committee of USA Wrestling, the national governing body for wrestling, unanimously approved the proposal not to send a team to Belgrade, Serbia, for the Dec. 12-20 event.

“My heart breaks for our athletes, as nobody is more affected by this decision than they are,” said Veronica Carlson, executive committee member and chair of the USA Wrestling Athlete Advisory Committee. “In the same breath, abstaining from the 2020 World Championships is the right decision. I am proud that the athlete voice was solicited and considered through every step of this process. In choosing to make this decision now, versus delaying it, the athletes have time to recover and refocus on what is most important — the 2021 Olympic Games.”

UEFA says Bayern Munich will be able to play Atletico Madrid in the Champions League despite a positive coronavirus test for forward Serge Gnabry.

Bayern said Tuesday that the 25-year-old Gnabry was “doing well” and was in isolation at home. He had trained with the rest of the team earlier that day.

UEFA says “we can confirm that the Bayern game is going ahead as scheduled.”

UEFA rules say games can go ahead if a team has 13 available players. That includes at least one goalkeeper.

Gnabry played for Germany in its Nations League game against Switzerland last Tuesday. He also played in Bayern’s 4-1 win over Arminia Bielefeld in the Bundesliga on Saturday.

The Spanish second-division soccer match between Alcorcón and Sabadell has been postponed after nine new coronavirus cases were found among Alcorcón players and staff members.

The Spanish league says two players were among those who tested positive ahead of Wednesday’s match.

Three other players and one staff member tested positive last week. That prompted the suspension of the team’s match against Ponferradina on Sunday.

Alcorcón is in 19th place in the 22-team standings with four points from five matches.