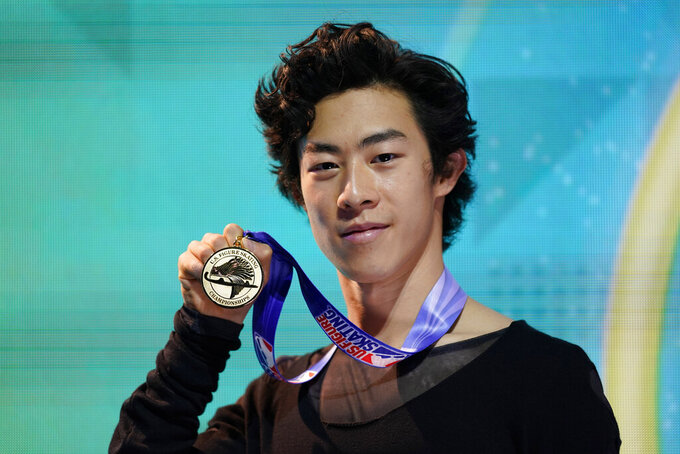 The school paused its whole athletic department last weekend after several positive tests for a new COVID-19 variant that transmits at a higher rate. The school said then that it was pausing athletic activities “until further notice and up to 14 days.”

In its latest testing update Friday, the school said there were 3,215 student-athletes, coaches and staff tested from Jan. 23-29. There were 11 positive tests, all athletes.

The NHL has postponed Vegas’ two games next week against the San Jose Sharks over concerns about the coronavirus.

Golden Knights defenseman Alex Pietrangelo and three coaches are in the NHL’s COVID-19 protocol and unavailable. Vegas also had a game against St. Louis that had been scheduled for Thursday postponed.

The games against the Sharks had been scheduled to be played Feb. 1 and 3 in Glendale, Arizona, where the Sharks have been based because of coronavirus rules in Santa Clara County.

The games will be made up later this season in San Jose. The Sharks opened the season with an eight-game road trip and were scheduled for their first home games next week against Vegas.

Now the Sharks will return to the Bay Area on Saturday for the first time since starting camp in December in Arizona. San Jose has a four-game trip in Southern California and will now play its home opener at the Shark Tank on Feb. 13 against Anaheim.

The Saint Mary’s men’s basketball team has paused all team-related activities because of positive COVID-19 tests and contact tracing.

The Gaels will postpone their next three games starting with Saturday’s scheduled contest at Pacific. Saint Mary’s will also postpone games next week on Feb. 4 at Santa Clara and Feb. 6 against Loyola Marymount.

The West Coast Conference and the teams will try to reschedule the games.

Defending French champion PSG said on Friday that both will self-isolate. They will miss the league match at Lorient on Sunday.

PSG coach Mauricio Pochettino tested positive two weeks ago but returned to the side last Friday against Montpellier.

The Atlantic 10 says Friday night’s men's basketball game between No. 22 Saint Louis and Richmond has been postponed because of COVID-19 concerns raised by the Saint Louis medical staff.

The Billikens, who lost 76-71 to Dayton on Tuesday night in their first game in over a month, had their previous seven games postponed after pausing their program on Dec. 30 because of the coronavirus.

They arrived in Richmond on Thursday and flew back to Saint Louis on Friday without elaborating on their reason for not playing.

The No. 11 Oregon women's basketball team has postponed a pair of games during a program pause because of the Pac-12′s COVID-19 protocols.

The Ducks’ games Friday night at Utah and Sunday at Colorado have both been postponed. Oregon (11-3, 9-3) was coming off victories at home over Washington and Washington State last weekend.

The International Skating Union has canceled the World Synchronized Skating Championships scheduled for April, but still plans to hold the individual worlds.

The synchro event was set for Zagreb, Crotia on April 9-10.

Stockholm is scheduled to hold the world event for singles, pairs and ice dancers from March 22-28. American Nathan Chen would be seeking his third straight world title; the 2020 worlds were canceled due to the coronavirus pandemic.

“The ISU Council confirmed that the other pending ISU events of the 2020-21 season remain scheduled as planned, subject to pandemic developments and no quarantine requirements and or prohibitive/extensive entry restrictions,” the governing body said.

The 2021 worlds are particularly important because they serve as a qualification competition for the 2022 Winter Olympics in Beijing.

Additionally, the Grand Prix of Figure Skating calendar for next season has been approved. That series begins in October and concludes in December.

Kentucky says its men's basketball game against No. 5 Texas has been canceled and all team activities have been paused for 48 hours.

The school said Friday it took those steps because of a combination of positive COVID-19 tests, contact tracing and quarantining. The decision is consistent with Southeastern Conference COVID-19 requirements.

The Wildcats have had two previous games this season postponed but the home matchup with Texas is their first outright cancellation.

The Oman Open scheduled for March 4-7 on the European Tour has been postponed because of the coronavirus pandemic.

It is the first event of the 2021 golf season lost to the pandemic.

The tour says the decision was made “following an announcement by the Omani government that all gatherings, international functions and sporting events are to be stopped in the country with immediate effect.”

The tour says organizers are looking into the possibility of rescheduling the tournament but “there are no definitive plans at this stage.”