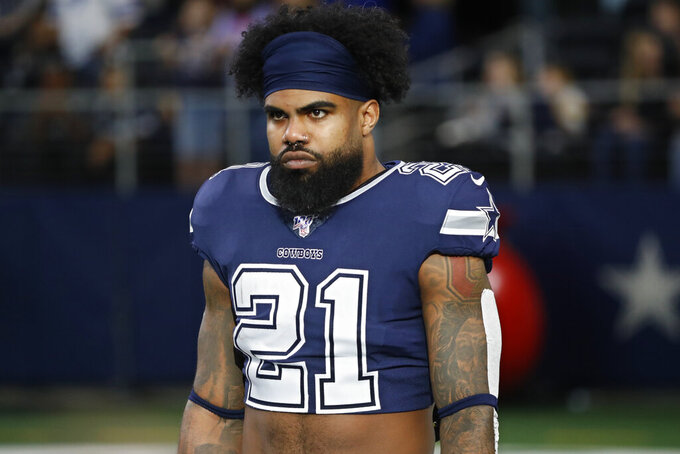 FILE - In this Dec. 15, 2019, file photo, Dallas Cowboys running back Ezekiel Elliott (21) warms up before an NFL football game against the Los Angeles Rams in Arlington, Texas. Ezekiel Elliott tested positive for the coronavirus, according to his agent. Rocky Arceneaux told the NFL Network on Monday, June 15, 2020, that Elliott was feeling OK and recovering.(AP Photo/Roger Steinman, FIle)

Michigan State says two athletes tested positive during a second round of COVID-19 testing, and East Carolina says it had one positive test result this week.

East Carolina says it tested 68 athletes, coaches and staff on Tuesday in its return-to-campus plan. The school in Greenville, North Carolina, didn’t specify who had the positive result.

The school said it has tested 133 athletes and 59 staff members so far. All other tests have been negative.

University guidelines require any individual who tests positive to self-isolate for up to 14 days with daily monitoring from athletics medical staff.

Soccer’s governing body, FIFA, is using almost $900 million of its cash reserves to help member federations get through the coronavirus pandemic.

All of FIFA’s 211 national members will get a $1 million payment and $500,000 more to spend specifically on women’s soccer.

Each of the six continental governing bodies gets $2 million from FIFA’s reserve fund, which held $2.7 billion after the 2018 World Cup in Russia.

FIFA says a further $565 million is available for interest-free loans to federations of between $500,000 and $5 million, depending on their audited annual revenue. Continental confederations can access $4 million.

Many soccer federations get much of their income from the men’s national teams, which have been unable to play since November.

FIFA says the money can go to help “clubs, players, leagues, or others that have been affected” by the pandemic.

Oversight of the money and repayment plans will be led by FIFA governance panel member Olli Rehn, who is governor of the Bank of Finland.

The University of Memphis says three student-athletes and one staff member in the athletic department have tested positive for COVID-19.

All four have been isolated, and medical staff are tracing their contacts. Memphis is neither releasing the names nor identifying the sport or sports involved, citing privacy concerns.

The university shared video Wednesday on Twitter of members of the men’s basketball team returning to campus. Their first stop was the Penny Hardaway Hall of Fame for virus testing.

Dallas Cowboys running back Ezekiel Elliott says he is feeling “normal” after testing positive for the coronavirus earlier this month.

“I would say I maybe had one or two days where I felt symptoms, and even then it wasn’t too bad,” Elliott said during a Twitch chat with Scooter Magruder this week. “I had a cough and a little bit of shortness of breath. But now I would say I feel good, I feel normal.”

Elliott said he hasn’t resumed working out yet. He said he could have been re-tested this week, but decided that it wouldn’t hurt to wait and get more rest first.

It was revealed June 15 that Elliott had tested positive for the coronavirus. That was about a week after he had been tested.

Elliott’s mother said last week on Twitter that the running back had been around someone who had no symptoms, but then tested positive for the coronavirus three days later. Elliott’s mother and sister were with him during that encounter. Both tested negative.

Manchester City has been given permission to host Liverpool in the Premier League on July 2 at Etihad Stadium.

The Man City-Liverpool match had been one of five games the police asked to be held at a neutral venue to keep away fans because of safety concerns.

But Manchester City Council’s safety advisory group says there are “no objections” to the match at City’s home stadium.

The rugby final of the postponed European Champions Cup has been set for Oct. 17 and the final of the second-tier Challenge Cup will be the day before.

The matches were called off in April because of the coronavirus pandemic.

The quarterfinals for both tournaments have been rescheduled for the weekend of Sept. 18-20. The semifinals will be Sept. 25-27.

Leinster will host Saracens in the quarterfinals in a repeat of the 2019 final, Toulouse plays at home against Ulster, Clermont Auvergne faces fellow French side Racing 92, and Exeter will welcome Northampton in an all-English clash.