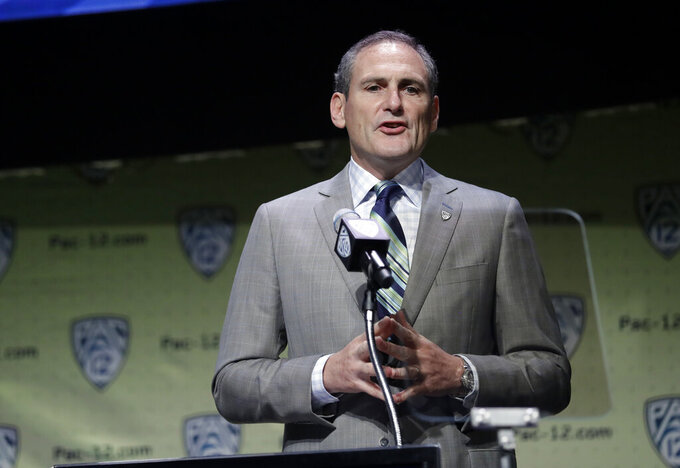 The Pac-12 will be adding a new bowl game to its postseason lineup beginning in 2020.

The Los Angeles Bowl will feature a matchup between teams from the Pac-12 and Mountain West in the new NFL stadium under construction in the LA area. The Pac-12's commitment to the game runs through 2025.

"We are thrilled to partner with the Los Angeles Bowl and bring a Pac-12 presence to the new state-of-the-art facility at LA Stadium, in one of the biggest markets right in our footprint," Commissioner Larry Scott said.

The game was announced Wednesday during Pac-12 media day.

After deciding to return to school instead of declaring for the NFL draft, Herbert hopes to join that fraternity of quarterbacks as a senior.

Herbert threw for 3,151 yards and 29 touchdowns as a junior last season but Oregon still finished fourth in the Pac-12 North.

"We've been through the highest of highs and lowest of lows and we've seen all the success that's been at Oregon so we're capable of looking at it and realizing this isn't where we wanted to be," Herbert said. "There's a direction that we're heading and I think we need to keep going that way."

Herbert was pleased to receive the nod. However, he recognizes it means nothing if Oregon can't back it up on the field.

The Pac-12 may try a new scheduling approach this season.

Commissioner Larry Scott said Fox and conference athletic directors are in preliminary talks about morning kickoffs for some games, which would put them in the network's key 12 p.m. Eastern timeslot.

Any morning kickoffs, which would be at 9 a.m. Pacific and 10 a.m. Mountain, would be voluntary and not dictated by Fox.

"That would be new and somewhat out of the box but I've tried to put everything on the table," Scott said. "I think there are some schools and markets that might respond positively."

Coaches are split about the possibility of a morning kickoff. UCLA's Chip Kelly said the time doesn't matter while Stanford's David Shaw said he would be somewhat resistant.

"All the studies we've all read and conducted ourselves on our campus, our sleep studies, it is better for young people to perform athletically if they get a full night's sleep," Shaw said. "And I don't know that you can find any group of 18- to 22-year-old young people that are going to go to bed at 10 o'clock at night to get up at 6 o'clock in the morning to make sure they can perform athletically."

Commissioner Larry Scott announced the decision Wednesday at the start of Pac-12 media day in Hollywood.

The league title game has been played at Levi's Stadium in suburban Santa Clara, California, since 2014. The event has struggled for solid attendance in the past half-decade, including a noticeably empty stadium for Washington's win over Utah last year.

After the upcoming season, the game will move to party-friendly Las Vegas and the Raiders' new stadium, which is still under construction just west of the Strip.

The Pac-12 men's basketball tournament has been played in Las Vegas since 2013, and conference leaders have credited the move with boosting attendance.

Utah has been selected as the favorite to win the Pac-12 in the annual preseason poll of media members.

The Utes and Oregon were tabbed to win their respective league divisions in the poll released Wednesday before the conference's media day in Hollywood.

Utah received 12 of 35 votes to win the Pac-12 for the first time since joining the conference in 2011. Oregon received 11 votes and defending champion Washington had 10.

Oregon edged Washington by one point to take the North Division, followed by Stanford and Washington State.

The Utes are the overwhelming choice in the South. USC picked up the other two first-place votes. Arizona State and UCLA tied for third.