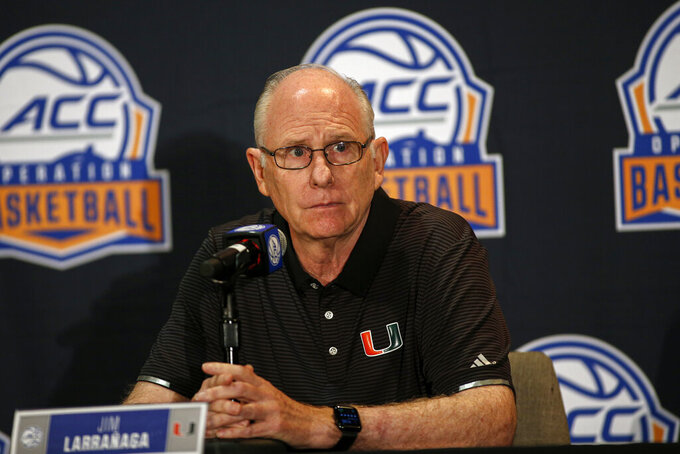 The Atlantic Coast Conference wrapped up media day with coaches and two players from each team participating in the event. Next up for the ACC will be to announce the results of its media picks for preseason favorite and all-conference players on Thursday.

The conference lost many of its top players to the NBA, including Zion Williamson, and appears more balanced overall than in years past.

One of the main topics of conversation Tuesday is college players being paid for play, a proposal that has gained momentum last month when California Gov. Gavin Newsom signed a law that goes into effect in 2023. The law will allow athletes at universities in California to make money from their images, names or likenesses beginning in 2023.

Commissioner John Swofford says the ACC needs to be "open-minded" to the idea and several of the league's high-profile coaches agreed with that notion. Duke coach Mike Krzyzewski says college athletics can no longer "put our heads in the sand" and must have a better game plan moving forward instead of being reactionary.

That said, nobody had a solution to a problem many view as a slippery slope.

North Carolina will be without three players to start the season — freshmen guards Anthony Harris and Jeremiah Francis and junior forward Sterling Manley, all of whom are battling knee injuries.

Coach Roy Williams put no timetable on their returns.

North Carolina still has one of the top recruits in the country in freshman Cole Anthony, but injuries have left the Tar Heels thin at the guard position. Along with Harris and Francis being out, Leaky Black and Andrew Platek have also been battling through minor injuries forcing Williams to bring up a player from the JV team for practice.

Williams joked "the day before practice started I didn't even know the guy's name."

Syracuse coach Jim Boeheim is lukewarm to the idea of the ACC changing its schedule to require each team to play 20 conference games instead of 18.

Boeheim worries that it could mean the heavily-talented ACC will get fewer teams into the NCAA Tournament.

Boeheim says it's been "proven over time when you talk to people that experts about what you need to do to get into the NCAA Tournament that the more conference games you play doesn't help you any because you have more losses."

Commissioner John Swofford said earlier one of the reasons the league is going to a 20-game schedule is because of the new ACC Network.

Syracuse will have a challenge to open the season, hosting defending national champion Virginia in a conference game on Nov. 6.

Notre Dame coach Mike Brey says one of the most difficult aspects of his job these days is dealing with parents of basketball recruits.

The coach says the difficult part is while recruiting a player you have to develop a close relationship with a player's' parents, but once they're on the team "I have to try to severe that" to avoid answering constant questions about playing time.

Brey says most parents want to know "what's my return on investment with little Billy, because I have had little Billy traveling all over the country for the last 10 years?" Brey says he constantly has to remind them that they're getting a degree from Notre Dame.

Clemson forward Aamir Simms believes college players should be paid to play — but with some limitations.

Simms says players bring a lot of attention and money to the school and should be compensated financially within reason. Simms says the danger is if players are getting paid millions of dollars "they won't really care about playing for the school; they will just care about getting the most endorsements."

Not everyone agrees change is needed.

Louisville's Steven Enoch says he has no complaints with his four years of college and how the system is being run. He says that's largely because of the NCAA ruling in 2014 that allows college programs to grant athletes unlimited meals and snacks gives him what he needs to survive. That ruling came about as the result of Shabazz Napier's comments about going to bed hungry because he didn't have enough food while at Connecticut.

Enoch says "that is the one change I am most thankful for."

Larrañaga said Tuesday at the ACC men's basketball media day that his brother was "the greatest guy I have ever known."

Jim Larrañaga, 70, says his brother, who was 9 years older than him, lived at home while attending St John's and made a point to read to him every night from the book "The Secret Project of Sigrud O'Leary."

He plans to fly to Minneapolis on Thursday to attend the funeral.

Georgia Tech coach Josh Pastner says his team is handling the news of a postseason ban and four years of probation for major recruiting violations as well as possible.

Pastner says their energy, their enthusiasm has been extremely high, adding: "Most times when you get punched in the nose and kicked in the shin, it's easy to lay down and just say forget it. These guys have had a good fight about them."

The sanctions handed down on Sept. 26 by the NCAA included a reduction in scholarships, limits on recruiting and a fine of $5,000 plus 2% of the program's budget.

The NCAA says former assistant coach Darryl LaBarrie gave $300 to a highly touted prospect for a visit to an Atlanta strip club and arranged for him to meet with a former Georgia Tech athlete who played for the NBA's Atlanta Hawks, including a visit to the player's home and a free meal at a lounge owned by the player.

Virginia coach Tony Bennett says just like his team didn't obsess over losing to 16th-seeded UMBC in the first round of the 2018 NCAA Tournament, the Cavaliers won't obsess over winning the national championship this past season.

Bennett says when his team became the first to lose in the NCAA Tournament as a No. 1 seed he didn't try to "sweep it under the rug." Instead he says his team addressed it and learned from it.

Now, as champions, he says they have enjoyed the success of winning it all but won't obsess over it and allow it to impact the upcoming season which he expects will be filled with growing pains after losing three players to the NBA draft.

Bennett says "you don't overdue either, and we are thankful for both extremes."

Duke coach Mike Krzyzewski says he won't be surprised if the NBA expands its annual draft to include more than two rounds in the not-so-distant future.

With the league's increasing reliance on the G League to develop young players, Krzyzewski says "if I'm the owner of an NBA team and I have a G League affiliate I don't want to just protect two guys — I want to protect everybody."

Krzyzewski says that could have an impact on the college game with more players turning professional earlier so they can get paid.

He says the NBA isn't going to stand still — and college athletics can't either, adding "we cannot keep our heads in the sand. ... We are not good game planners. We are very reactionary."

He also says he expects the G League will increase in popularity, predicting it won't be long before its games are broadcast on national television.

Atlantic Coast Conference Commissioner John Swofford says he is "open minded" when it comes to college athletes being paid for endorsement deals.

Last month California Gov. Gavin Newsom signed a law that goes into effect in 2023 allowing athletes at universities in his state make money from their images, names or likenesses. The law also bans schools from kicking athletes off the team if they get paid.

Swofford says that California law is "extreme," but added that he is not opposed to "modernizing" rules for amateur athletics. However, he says he would prefer a consistent national approach rather than individual states laws that can vary.

Swofford says, "I don't think this is going to be the end of college athletics by any means. We've been resilient in the past and we will be now and we will be in the future."

The Atlantic Coast Conference will open the season trying to replace a significant amount of star power.

The league holds its preseason men's basketball media day on Tuesday in Charlotte, North Carolina. The ACC is coming off its third national championship in five years with Virginia winning that program's first title.

Yet the league must replace several big names, including national player of the year Zion Williamson from Duke, the headliner among the league's 10 NBA first-round draft picks in June.

Tuesday's schedule includes a full day of interviews for players and coaches, which includes Virginia Tech's Mike Young as the lone new coach.

The ACC will release media picks for preseason favorite and all-conference players Thursday.