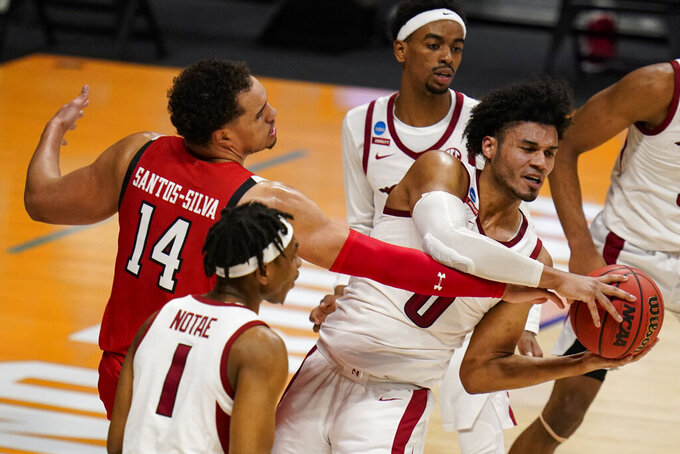 The start of the Midwest Region game between Oklahoma State and Oregon State at Hinkle Fieldhouse in Indianapolis was delayed for nearly 20 minutes because of a power outage.

People inside the building heard a pop as the building lost most of its power, shutting off arena lights and the scoreboard as well as the postgame Zoom news conference for the teams after the Texas Tech-Arkansas game.

The lights and power came back up quickly, with tournament officials gathering on the court before team staffers and a few players returned to the floor for the final game of the day.

Florida guard Tyree Appleby has been cleared to play and was in the starting lineup for No. 7 seed Florida against 15th-seeded Oral Roberts in the South Region.

Appleby suffered a head laceration when he took an inadvertent elbow early in the second half against Virginia Tech and ended up bleeding all over the court. He wobbled to the locker room, got seven stitches and returned to the bench area in overtime to see the Gators pull out a 75-70 victory at Hinkle Fieldhouse.

The 6-foot-1 junior finished with six points and five rebounds in 22 minutes.

Justin Smith is off to a good start for Arkansas, which leads Texas Tech 33-31 at halftime of their South Region second-round game.

Smith had 10 points by halftime for the third-seeded Razorbacks two days after he went for 29 points and 13 rebounds in a first-round win against Colgate. And freshman Davonte Davis had already surpassed his season average, scoring nine on 4-for-7 shooting.

That offset a quiet half for star freshman Moses Moody, who has just four points on four shots. But Arkansas erased a 10-point deficit in this one after rallying from 14 down before halftime against Colgate.

Terrence Shannon Jr. had nine points to lead the sixth-seeded Red Raiders, who shot just 36% but had nine offensive rebounds.

Arkansas is trying to return to the Sweet 16 for the first time since 1996, while Texas Tech reached the title game of the 2019 tournament.

Jim Boeheim and his Syracuse Orange are going to the Sweet 16.

Buddy Boeheim scored 25 points and Joe Girard added 14 points with seven assists and six rebounds as the 11th-seeded Orange held on to beat third-seeded West Virginia, 75-72 in the Midwest Region on Sunday night.

Boeheim had six of the Orange's 14 3-pointers.

The game featured two of the winningest coaches in Division I history. It was Boeheim's 982nd career win, 82 more than the Mountaineers' Bob Huggins.

Just before player introductions, Syracuse coach Jim Boeheim and counterpart Bob Huggins greeted each other by bumping forearms just two days after the West Virginia coach became the sixth and latest entry into the exclusive club of 900-game Division I winners.

After two misses against Oklahoma State, Huggins finally reached No. 900 with Friday night’s 84-67 victory over No. 14 Morehead State. Sunday’s second-round game winner earns a berth in the round of 16, so the pleasantries lasted only briefly before turning to business.

Huggins entered the court at Bankers Life Fieldhouse and made himself comfortable on a stool just outside the coach’s box before getting up and greeting his fellow coaching legend — who entered with 981 wins.

Syracuse is 34-16 against WVU in a series dating back to 1917. Huggins seeks only his second win against the Orange in seven tries as the Mountaineers’ coach.

Matthew Mayer had 17 points and Davion Mitchell added 16 points and eight assists as Baylor took care of business, defeating Wisconsin 76-63 for a spot in the Sweet 16.

The victory for the Bears, the top seed in the South, came a couple of hours after Illinois became the first top seed in the tournament to lose, a victim to Loyola Chicago.

The ninth-seeded Badgers were attempting to topple a No. 1 seed in the second round for a third time, joining the 2000 team against Arizona and the 2017 squad against Villanova.

The Badgers hit eight 3-pointers, but so did the Bears, and Wisconsin had 13 turnovers to only four for Baylor and failed to register a steal. Micah Potter had 10 points and 10 boards for Wisconsin.

The underdogs from Oregon State got into the spirit of playing at Hinkle Fieldhouse.

Hours before their second-round game against Oklahoma State on Sunday, the Beavers posted a video on Twitter of 7-foot-1 center Roman Silva carrying 6-3 guard Gianni Hunt over to the basket to measure the rim’s height. Coach Wayne Tinkle helps with the measuring as well.

It was a recreation of a similar scene in the movie “Hoosiers” that was filmed at Hinkle.

The 12th-seeded Beavers beat Tennessee in the first round to set up the matchup with No. 4 Oklahoma State in the Midwest.

The first No. 1 seed is out of the NCAA Tournament. Eighth-seeded Loyola Chicago stunned Illinois, the top seed in the Midwest, 71-58 on Sunday.

Center Cameron Krutwig had 19 points and 12 rebounds and Lucas Williamson chipped in 14 points as the Ramblers led throughout, much of it by double digits.

Baylor is the No. 1 seed in the South Region, but Wisconsin’s recent NCAA Tournament history gives the Bears reason for concern heading into their second-round matchup Sunday.

Wisconsin has won three of the past four times it has faced a No. 1 seed in the NCAA Tournament.

Sister Jean, the 101-year-old chaplain to the team, said, “As we play the Fighting Illini, we ask for special help to overcome this team and get a great win. We hope to score early and make our opponents nervous. We have a great opportunity to convert rebounds as this team makes about 50% of layups and 30% of its 3 points. Our defense can take care of that.”

The Ramblers responded well. Loyola was up 33-24 at halftime of the Midwest Region game.

The NCAA Tournament’s round of 32 is underway with nine double-digit seeds still alive.

According to NCAA spokesman David Worlock, that matches the second-highest total of double-digit seeds ever to reach the round of 32.

UCLA and Abilene Christian face off Monday, assuring that at least one double-digit seed will reach the Sweet 16.

This is the first time four teams seeded 13th or worse made it to the second round.