The Latest: Rangers close down training camp in Arizona 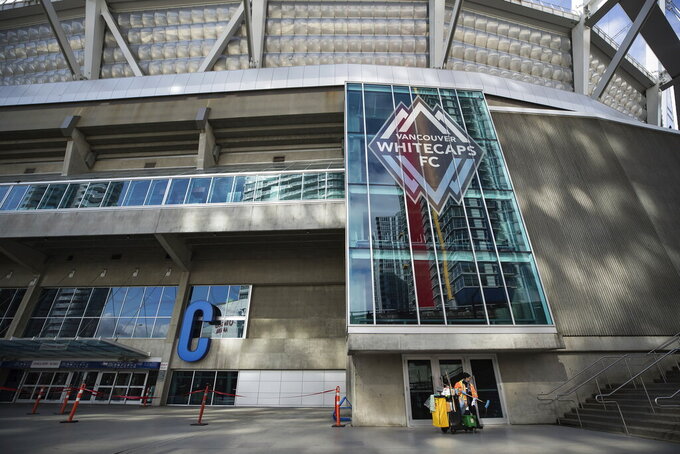 The Latest on the coronavirus outbreak's effect on sports around the world (all times local):

Texas general manager Jon Daniels says the team has “effectively" closed down its training camp in Arizona, with a bulk of players from the big league camp electing to go home. He says 15 to 20 players were headed to the Dallas-Fort Worth area, where they either have a primary residence or a place where they live during the regular season.

A charter plane was scheduled Monday for players to return to Texas, though some still elected to drive their own cars from the Arizona camp that is just more than 1,000 miles from their new ballpark in Arlington, Texas.

Daniels said five or six players would be staying in Arizona, along with some staff members who have their offseason homes in the area. Other coaches were returning home to be with their families.

When asked what his biggest baseball concern was, Daniels responded: “I don't really have one to be honest with you, my head's not even there. It might have been a few days ago, but it's been pretty solely focused on making sure everyone's got what they need, and everyone's family is taken care of, and that we can get everybody home. We're going to have plenty of time to figure out the baseball piece."

Keeneland announced it will be closed to all non-essential guests starting Monday. Only essential employees, owners, trainers, veterinarians, blacksmiths and stable workers will be allowed into the track in Lexington, Kentucky.

The track will set up screening checkpoints to monitor those seeking access and everyone will have their temperature taken. Only people with a temperature less than 100.5 degrees and showing no symptoms of the COVID-19 virus will be admitted. The screening will continue indefinitely.

The Texas racetrack that hosts the Formula One U.S. Grand Prix and other motor racing series announced it is closing indefinitely after a series of cancellations because of concerns about the coronavirus.

The Circuit of the Americas was supposed to host the MotoGP Grand Prix of the Americas on April 5 and the IndyCar Challenge on April 26. Both races have been canceled. The track is also home to the USL soccer team Austin Bold and the league season has been suspended.

The facility also has a concert amphitheater and hosts large concerts and other events. Austin city officials have banned gatherings of 250 people or more at least until May 1.

The F1 US Grand Prix remains scheduled for Oct. 25 if the season resumes. Formula One has postponed all races until at least May. MotoGP has tentatively rescheduled its Texas race for Nov. 15.

“The joy of creating memorable occasions has been replaced with the disappointing reality of a worldwide crisis,” track officials said in a statement. “We hope everyone stays healthy, heeds the caution advises by leaders and experts, and comes back to COTA when good times return.”

Major League Soccer has extended the moratorium on team training through Friday.

MLS announced a 30-day suspension of match play on Thursday because of the new coronavirus.

The league said Sunday that players should remain in the market of their team and exercise safe social distancing. MLS said it is working with its players' association and other North American professional leagues on a protocol to allow players at training facilities for rehabilitation or individual training.

Professional soccer is shutting down in Mexico following Sunday’s matches, which were already being played with no fans present as a precaution due to the new coronavirus.

The measure applies to the men’s top flight and second division as well as the fledgling women’s league.

Soccer officials said in a statement that the suspension would remain in effect until it’s determined that it’s safe to restart play in coordination with Mexico’s Health Department.

Mexico previously played soccer matches without fans for several weeks during the 2009 H1N1 influenza health emergency, an outbreak with Mexico as the epicenter.

Federal health officials on Saturday night raised the number of confirmed coronavirus cases in the country to 41, up from 26 the previous day and 11 the day before that. On Sunday at least two more were announced by state-level authorities.

NCAA vice president of men’s basketball Dan Gavitt says brackets won’t be created for the NCAA men's and women's basketball tournaments that were canceled due to coronavirus concerns. Gavit says he made the decision and it was supported by basketball committees.

“There is not an authentic way to produce tournament fields and brackets at this point without speculating,” Gavitt said Sunday, the day the men's NCAA Tournament field had been scheduled to be announced. “And, that isn’t fair to the teams that would be positively or negatively impacted by manufacturing March Madness. More importantly, in light of this global health crisis, I believe we need to keep college basketball in perspective.”

College basketball’s showcase was canceled on Thursday, leading to suggestions from coaches and athletic directors to release brackets for the event even though it won’t happen this year.

“Players and coaches want to see their school name on the bracket,” Gavitt acknowledges. “Members of the media want to dissect matchups. Bracketologists want to compare the work of the committees versus what they’ve predicted. Fans are curious for those same reasons. All of us want something to fill the void we’re feeling. However, anything less than a credible process is inconsistent with the tradition of the NCAA basketball championships. … There will always be an asterisk next to the 2020 NCAA men’s and women’s basketball championships regardless if brackets are released.”

NCAA President Mark Emmert has said postponing the tournament indefinitely was not feasible.

Brazil’s soccer confederation has suspended all competitions under its control due to the coronavirus outbreak.

The tournaments affected include the men's Brazilian Cup, the top two tiers of the women’s Brazilian championship, and junior tournaments.

The men’s top-tier Brazilian championship is scheduled to begin in April.

The decision does not affect state championships currently being played. Some matches were held without any fans this weekend in São Paulo and Rio de Janeiro. São Paulo, Rio and other state soccer bodies are set to decide Monday on their course of action.

The New York State Olympic Regional Development Authority says all of the ski areas and venues that it manages will suspend operation at the close of business Sunday.

Closures include all Nordic and Alpine ski resorts including Mt. Van Hoevenberg in Lake Placid, Belleayre Mountain Ski Resort in the Catskills, Gore Mountain in North Creek and Whiteface Mountain in Wilmington, near Lake Placid.

All Lake Placid Olympic sites will also be closing, including the Olympic Jumping Complex, Olympic Sports Complex, The Olympic Oval and the Olympic Center including its museum and retail shops.

Soccer players at Brazilian club Gremio have staged a protest of their own by wearing face masks on the field before the start of their game against São José on Sunday.

Authorities in Brazil have not ordered the cancellation or postponement of sporting events because of the corona pandemic but recommended that games are held without fans.

The Italian soccer federation is planning to ask UEFA to postpone the European Championship.

The Stadio Olimpico in Rome is slated to host the opening match of Euro 2020 on June 12, plus three other games of the tournament.

Gravina says, “The hope is to finish by June 30. … And we’ll need to insert the Champions League and Europa League also. The deadline is June 30, then we’ll eventually see if we need to exceed that.”

He adds, “We’ll propose to UEFA that they postpone the Euros.”

Serie A is currently suspended until April 3, along with all other sports in Italy, the European epicenter of the virus outbreak.

UEFA has a meeting planned on Tuesday to discuss the calendar.

The virus outbreak has also tested the limits of soccer's World Cup schedule.

Valencia’s Argentine defender Ezequiel Garay says that he has tested positive for the coronavirus, making him the first Spanish league player to become infected.

“I have tested positive for the coronavirus,” Garay wrote on a social media account Sunday. “I feel well and now the only thing to do is to follow the instructions of health officials to remain confined.”

Valencia added in a statement that a total of five members of its staff and team have the new virus, without specifying if Garay is the only player. It says that all are in good health and confined at their homes.

Garay, who is recovering from surgery after tearing a ligament in February, said in a message posted on Instagram that “it’s clear that 2020 is starting on the wrong foot.”

On Saturday, fellow Spanish club Alavés said that two members of its coaching staff had the virus. It said they are in good health.

The Spanish league has suspended play due to the pandemic.

Most people quickly recover from the global virus after experiencing only mild or moderate symptoms, such as fever and cough. For some, especially older adults and people with existing health problems, it can cause more severe illness, including pneumonia.