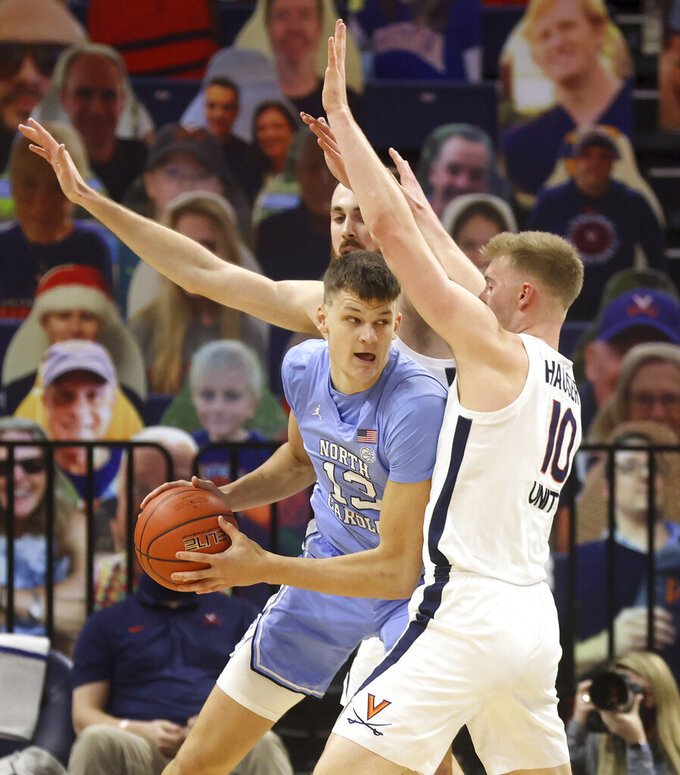 The Southeastern Conference has shifted its men’s basketball schedule this week because of icy weather moving into the region and COVID-19 issues.

The league announced Monday that South Carolina’s visit to No. 19 Tennessee is moving from Tuesday to Wednesday night because of a combination of a positive coronavirus test, contact tracing and subsequent quarantining of individuals within the Volunteers program.

Iowa says it won’t drop its women’s swimming and diving program, one of four sports the school had planned to eliminate due to budget concerns brought about by the coronavirus pandemic.

Members of the women’s swimming and diving team team filed a legal complaint against the school in September, arguing that a decision to eliminate their program violated a landmark gender equity law. In December, a U.S. District Court judge issued a preliminary injunction blocking the school from cutting the program.

Iowa officials said Monday they continue to disagree with the claims in the lawsuit.

School officials announced in August they were dropping men’s and women’s swimming and diving, men’s gymnastics and men’s tennis at the end of their 2020-21 seasons. Iowa still plans to eliminate those other sports.

At the time of the announcement, Iowa was estimating a $75 million deficit because of the pandemic. School officials have revised that estimated deficit to between $50 million and $60 million, thanks in part to the Big Ten’s decision to hold a modified version of a football season.

After another postponement, the North Carolina men's basketball team is looking for another opponent.

The program’s official Twitter account posted Monday that the Tar Heels are seeking a home game for this week. That plea comes after Tuesday’s visit from No. 18 Virginia Tech was postponed, the third Atlantic Coast Conference home game called off for the program.

UNC’s January game against Clemson was postponed due to coronavirus concerns within the Tigers program. Last week’s home game against Miami was postponed hours before tipoff after the emergence of social-media video showing players Armando Bacot and Day’Ron Sharpe mingling with other people celebrating a win over Duke and no one wearing a mask.

A day later, UNC players and managers apologized for not following school and athletics department COVID-19 guidelines. The Tar Heels lost at No. 7 Virginia on Saturday, the same day the ACC announced the Virginia Tech postponement.

UNC’s next scheduled game is Saturday’s visit from Louisville.

Vanderbilt says a limited number of students from its senior class can attend the men’s basketball home game Wednesday with Kentucky.

The release announcing the move didn’t specify how many seniors would be permitted to attend the game. School officials noted that Vanderbilt undergraduate students are tested twice a week for COVID-19.

Masks will be required of any students attending the game. Concessions won’t be activated to limit movement within the building.

The Atlantic Coast Conference announced Monday that Clemson's men's basketball game at Notre Dame scheduled for Wednesday has been postponed due to COVID-19 issues.

The conference says in a release that the postponement follows a positive test, subsequent quarantining, and contact tracing within the Clemson men’s program. The team is following ACC protocols.

A makeup date has not been announced.