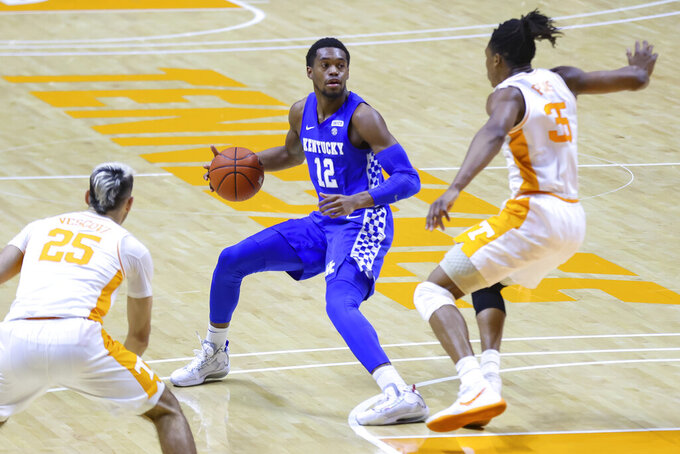 Texas A&M’s Southeastern Conference men’s basketball game at Kentucky on Tuesday night has been postponed due to a combination of positive tests, contact tracing and quarantining within the Aggies’ program.

It’s the seventh consecutive postponement for A&M, which hasn’t played since beating Kansas State 68-61 on Jan. 30 in the SEC/Big 12 Challenge.

The SEC has built in March 5-7 to make up games postponed because of COVID-19 protocols, but no makeup date has been determined. Kentucky’s Dec. 29 SEC game against South Carolina was also postponed.

The school said Saturday that the Tar Heels will host Marquette on Wednesday, which comes after they had a fourth game postponed in Atlantic Coast Conference play. Three of those postponements have been home games.

Last week the school added a nonconference game against Northeastern two days ahead of time after a game against No. 18 Virginia Tech was postponed. The game against Marquette comes after Tuesday’s trip to Boston College was called off.

None of the four postponements for UNC has been rescheduled. The announcement came shortly before the Tar Heels hosted Louisville on Saturday.

The Columbus Blue Jackets received permission from state authorities to allow a limited number of fans at games starting next week.

The city of Columbus and the Ohio Department of Health signed off on the plan to allow up to 1,953 fans -- 10% of Nationwide Arena’s capacity -- for the last 16 home games, beginning March 2 against Detroit.

Fans entering the building must complete an online check-in questionnaire and wear masks. They will be grouped in “seating pods” to maintain physical distancing. Tickets will be digital and concession stands cashless.

Fans have not been at games in Columbus this season because of COVID-19 restrictions. The last time the venue welcomed spectators was March 1, 2020, about a week before the pandemic began and shut down sports nationwide.